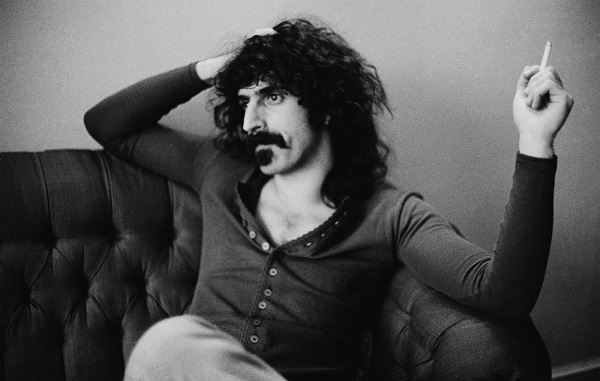 Frank Zappa, who died in 1993 at the age of 52, released 62 albums and recorded another 53 that have yet to be released. His is one of the best-known names in rock. And yet his only chart hit was “Valley Girl,” a novelty song he recoded with his daughter Moon that didn’t even crack the top 40. Frank Zappa’s music was challenging, difficult to play… and often difficult to listen to.

Apparently, Frank Zappa, the man, was pretty damn difficult his own self. He was an unfaithful husband, an absent father, a taskmaster employer – yet, at the same time, an unflagging advocate for artistic freedom and workers’ rights. He demanded as much from himself as he did from everyone else, and lived with a personal integrity one rarely finds in a contemporary performer. Frank Zappa “entertained” only when there was no other way to make his point.

As Alice Cooper, whose career Zappa launched, put it: “Frank could have written hit records all day. He had no interest in that whatsoever.”

This complex portrait of a complicated person was put together by actor/director Alex Winter (he was Bill in the Bill and Ted movies, and directed the well-received documentary Showbiz Kids) using a monumental amount of Zappa-bilia, thanks to unlimited access to the musician’s personal archive. And Zappa archived everything, from the 8mm horror movies he made as a child up to his testimony in front of the US Congress. (Remember those “Parental Advisory” stickers? He was against them.)

The Italian-American son of a chemist, Zappa started playing in bands in the 1950s, forming a racially integrated group when such things were frowned upon. This was an era when comedian Lenny Bruce, for whom Zappa opened, got arrested for using language onstage that the animated grade schoolers of South Park now freely use on TV. I’d insist Zappa didn’t so much live to offend as that the Powers that Be were so easily offended, but he himself said, “A lot of what we do is designed to annoy people just enough to notice their environment, and do something about it.”

His band The Mothers of Invention was formed in 1965, and diversity was the least of their antiestablishment stances. So outré that “the hippies didn’t like us,” they moved to New York in 1967 where the underground art scene was more welcoming. They got signed by a record label exec too distracted by the hot girls in the vicinity to pay attention to the actual music. In the end, Zappa would form his own label, one of the first artist-run indies, to get out from under the corporate thumb. He always assumed the corporations were ripping off the creatives. He was always right.

As a piece of filmmaking, Zappa can be erratic in its pace, going from frenetic choppy edits of rock history in the beginning to long, slooow passages of atonal symphonic music at the end. Winter seems to be mirroring the pace of Zappa’s own life, as he becomes more intent and focused on his modern classical pieces. Problem is, the sex, drugs and rock ‘n’ roll part (technically “sex, no drugs and rock ‘n’ roll,” as Zappa was famously drug-free) is a lot more fun for the audience. I would happily have spent more time in 1969 and less in 1989.

Still, this remains a compelling portrait of an artist who was a consistent seeker, forever trying to make the music he heard in his head available to our ears.

Opens in Theaters and On Demand November 27th