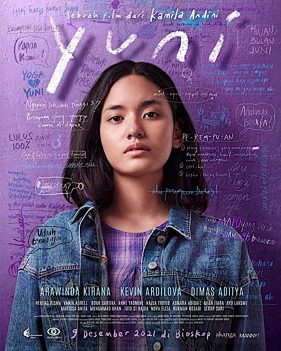 Los Angeles, CA (The Hollywood Times) 11/3/21 – Thursday November 4 at the Landmark Theatres in West Los Angeles was a screening of Indonesian filmmaker Kamila Andini’s Yuni  (2021), a coming-of-age film based on a screenplay co-written by the director and Prima Rusdi. The film is dedicated to the late poet Sapardi Djoko Damono, whose 1994 poem “The Rain in June” inspired the story. It is the story of a 16-year-old girl Yuni (Arawinda Kirana), who has little choice but to grow up before she’s ready to, while realizing in her country of Indonesia with its fairly draconian Islamic traditions there are often no other choices. This is a powerful story with universal appeal and a fitting choice as Indonesia’s submission for the Best International Feature Film at the 2022 Oscars. The film is part of this year’s 2021 Asian World Film Festival. There will be another screening of this film today Friday, Nov. 5, at 4:00 pm.

Yuni is a typical Indonesian teenager: Spending time with her girlfriends on her cell phone, gossiping with the girls, dealing with peer pressures and going through romances. She’s part of a superstitious world with Indonesian traditions, where one believes that if a girl turns down more than two marriage proposals she might never marry. This is made even more complicated by the strict Islamic laws that have been imposed in Indonesia in recent times. Yuni’a favorite color purple (a color often associated with independence) is added to her drab school uniform, as a way for her to demand self-respect. Yuni struggles to ward off traditional arranged marriages by her granny (Nazla Thoyib), who she lives with while her folks are away working in the city. Her aim in growing up is to find out who she really is, as she’s up against a repressive society that wants to suck the life out of its young girls. A few years ago, the government attempted to impose a new law for mandatory testing of girls if they’re still virgins and to discourage them from pursuing a higher education.

Yuni wants to study in the university and is studying really hard to get a scholarship, since her parents are rather poor, and she is actually staying with her traditional-minded grandmother, as they are working abroad. At the same time, she longs to be relieved of her hijab, both literally and metaphorically, which is why she hangs out with a hair and makeup stylist, Suci, who frequently turns her into a “modern, hip girl,” and who also is divorced and enjoying her life exactly the way she wants it.

Yuni is not exactly perfect. She has a tendency to steal anything purple that comes her way, while, when she realizes that a younger student, Yoga (Kevin Ardilova), has a crush on her, she feels no remorse in exploiting his knack for poetry in order to write her a literary assignment she has trouble with. Nevertheless, she is well liked among her fellow classmates, with whom she frequently sits to talk about boys, sex, orgasm and self-pleasure even, while her beauty has also made her quite popular to men, with the marriage proposals coming one after the other.

As her grandmother insists that marriage is happiness, Yuni has to fend off a cocky worker, a married man three times her age, and eventually a teacher in her school with a well-harbored secret she uncovers by chance. In the meanwhile, her relationship with Yoga becomes more complicated and pressure from all sides piles up on her.  Kamila Andini has created a very sensitive portrait of a girl experiencing adolescence and the passage to maturity, in a narrative, however, that unfolds in two axes, as Yuni also serves as a paradigm of the lives of women in an Indonesian society that is still patriarchal, at least regarding the Islamic part of the population, but also sees the sirens of the Western culture affecting the lives of people.

That the protagonist is “in the middle” is excellently portrayed in two scenes, the one where the girls wearing hijabs are lying on the grass talking about issues that are taboo, like masturbation and extramarital sex, and the one where Yuni wearing make-up done by her friend Suci poses to be photographed for Instagram, in a place though, that no one can see her. Andini’s comment also extend to a number of other instances of Indonesian society, although in a more subtle fashion, as in the case where the Islamic union in the school is in charge of school activities and decides to forbid dancing and singing, and the whole concept with the professor, who finds himself in a situation similar, but essentially worse than Yuni’s.

Lastly, that Yuni’s assignment is to analyze “Rain in June” an iconic poem by Sapardi Djoko Damono, whose passage are frequently appearing throughout the movie, induces the narrative with a personal touch, since Andini has cited the work as the film’s inspiration, which she has dedicated to the late poet. She seeks help from a male student Yoga who is good with analyzing poetry and that serves as the spark of their connection.

Arawinda Kirana gives a magnificent performance as Yuni, highlighting her inner struggle and the search for an identity and a series of answers no one is able to help her discover in the best fashion, with her presence and her beauty anchoring the movie in the best way. Kevin Ardillova as Yoga is also very convincing in the way he cannot help showing his feelings and his lack of self-confidence, which only moves away when he is talking about literature. The antithetical chemistry between the two is among the best assets of the movie. Asmara Abigail as Suci gives a very much needed note of constant cheerfulness, in a role that occasionally steals the show.

Yuni is the third feature film from Indonesian filmmaker Kamila Andini. Her earlier films Angel Sign and The Seen and the Unseen have been to film festivals previously. Actress Arawinda Kirana has received a number of awards for her acting in Yuni.