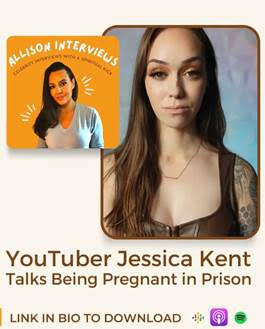 Los Angeles, CA (The Hollywood Times) 11/16/21 – Jessica Kent is a celebrated “Prison YouTuber” (an exploding subgenre of YouTubers who have done time behind bars) and social media personality who recounts her story and experiences with drug use, selling drugs and fire arms on the black market, being incarcerated while pregnant and detoxing from hard drugs, and all things prison culture from the scary and surreal to the quirky and fascinating. Nothing is off limits on her YouTube channel.

In addition to her candid accounts of detoxing and getting clean while in prison, her nine months of pregnancy, going into labor and shackle-restrained childbirth behind bars; Jessica talks remaking her life, getting her young daughter out of foster care and gaining full custody, and her rise to social media stardom. Jessica Kent’s YouTube Channel, Instagram, and TikTok accounts have a combined following of 2 million followers and more than a billion views. She is one of the most viewed and followed “Prison YouTubers” on the internet.

In this in-depth interview, journalist and host of the ALLISON INTERVIEWS podcast, Allison Kugel, deep dives with Jessica Kent on her past as a teen meth and heroin addict and drug and guns dealer, getting pregnant by her drug dealer, being pregnant behind bars while detoxing and fighting for basic prenatal care, giving birth while handcuffed and shackled, and all the other dirty details that make this episode of ALLISON INTERVIEWS a wild ride and must listen episode!

The following are excerpts from the latest episode of the ALLISON INTERVIEWS podcast with host and entertainment profiler, Allison Kugel, interviewing YouTuber and social media personality, Jessica Kent. The full podcast is available on Apple Podcasts and Spotify.

On Finding Out She Was Pregnant in Jail

“They take me to jail. I’m detoxing in this really disgusting drunk tank cell, and a part of me just doesn’t care. I was so tired and so drained because I had been awake on meth for months. I’m sitting in this county jail nurse’s station and the woman says to me, ‘Oh, that’s why you’re feeling so sick. You’re pregnant. You can go back to the dorm now.’ I’m thinking, ‘Excuse me? You can’t just speed past that like you didn’t just say what you said.’ I was like, ‘No mam. I’m going to prison. I can’t be pregnant. That’s definitely not me.’  Well, it definitely was me and I just couldn’t wrap my head around that.”

On Being Denied Basic Prenatal Care

“They didn’t pregnancy test me at intake.  I found out a couple of weeks into my jail stay that I was probably a few weeks along in my pregnancy when I was arrested. Obviously, I have no idea, because it is just way too early in the pregnancy to know, but I was not given prenatal vitamins for three months into my stay and no ultrasound, nothing.”

“People say, ‘if you can’t do the time, don’t do the crime.’ But it’s not a people problem. It’s a law problem to incarcerate drug addicts at the rate that we are incarcerating them.  We are just flooding the system with people that genuinely need treatment. I needed help.  I understand what I did was wrong. I know I broke the law.  I definitely deserved to be there, but all of the trauma that occurred after I was arrested was not okay. No prenatal vitamins for my daughter. No drugs to help me detox safely so that my unborn child is okay.  I didn’t have access to clean water for several weeks at one point.  It was just a really dangerous environment and I was conscious of that and very scared. It took me a couple of months to wrap my head around the fact that I have to protect this human growing inside of me.  I’m coming off drugs and I’m facing 20 years in prison. Now I have to figure out how to go to prison pregnant.”

On Being Handcuffed and Shackled While in Labor and Post-Labor

“In active labor I was handcuffed. This is just bad policy. The policy clearly states if an inmate is transported outside of the prison, they have to be kept in some form of chains or shackles the entire time.  The first guards that I was with said, eventually, ‘Hmm, I’m not comfortable with keeping her arm shackled to this bed.’ At some point the female C.O. (correctional officer) took it off and the male C.O. said, ‘I’m going to step outside while we have a baby.’  I appreciated that and was very grateful that he left, because I was already so uncomfortable. The staff at the hospital was also very uncomfortable. The policy states that inmates must be restrained at all times outside of the prison facility, so at some point, and I’m not sure when, she took off the handcuffs and I’m holding my daughter. A new set of guards came in, and it was another female and she said, ‘Why is this inmate not shackled?’ She immediately grabbed leg chains and grabbed one of my legs and immediately shackled me to the bed. The doctor came [back] in and said, ‘She needs to get up and walk around so she can heal her body properly. She just had a baby.’ This guard looked the doctor dead in the face and said, ‘No. It’s against policy.’

On Winning Custody of Her Daughter Post-Release

“When I walked into court for the last time, Micah (Jessica’s daughter at age 2) was in this really cute polo and I was dressed up for court. The judge looks at me and says, ‘Ms. Kent, I don’t know if I’ve ever seen anyone work this hard and make this much progress in a short amount of time. Unless there are any objections from CPS, I am going to grant you sole legal custody of Micah. Good luck to you.’ I say, “I can go? We’re done?”  She says, “Yes. You’re done you can go.”   I lost it. I’m Crying. I can’t believe it.  I grabbed Micah, scooped her up, and I walk out to the hallway.  I hit my knees, hugging Micah, and crying and I told her, “We did it girl. We did it. We did it.”

On Prison Reform and Drug Offenses

About Journalist and Podcast Host Allison Kugel
Allison Kugel is a veteran entertainment journalist with more than three hundred long form celebrity and newsmaker interviews published and syndicated, worldwide. She is author of the memoir, Journaling Fame: A memoir of a life unhinged and on the record, and host of the new podcast, Allison Interviews, where listeners can tune in to hear the full, unfiltered conversations behind Allison’s print interviews. Listen and embed the entire podcast episode with guest Danica Patrick on Apple Podcasts, Google Podcasts, or Spotify. Follow Allison Kugel on Instagram @theallisonkugel and at AllisonInterviews.com.