The Young Dubliners played at The Rose in Pasadena last week to all us wonderful fans, who love to sing along and dance with every song.

Bob Boulding is leaving the band after 18 years.

The interview with Bob Boulding, lead guitarist with the Young Dubliners:

THT: What are looking to accomplish?

Bob: “I just want to talk to lots of kids and teenagers and get them hipped up on music. I teach people of all ages, not necessarily about just playing the instrument, but just feeling music and hearing it properly.  It’s a holistic approach and that is how I do it.”

THT: Are you going to teach people with no experience or those that have it but want to learn more?

Bob: “Oh both, I definitely specialize in the beginning, getting everyone started.  Everybody can play music, I truly believe that.”

THT: You like playing the guitar, it that instrument hard to play?

Bob: “It’s kind of hard, all instruments are hard to play in through own way.  The magic thing about a guitar is that there is certain things you can do on it, that is almost a kin to being in like a drum circle, you can make some noise and have fun and you don’t have to be Van Helen.”

THT: What is your age group going to be from youngest to the oldest?

Bob: “I get kids as young as five and all the way up to 95.  I have had some older folks before and its great and very therapeutic.  To feel and hear something in your own hands, jumping and riding around making you’re spirt dance.”

THT: What type of guitar lessons will you teach?

Bob: “I will teach bass, which is somewhat similar to guitar, some songwriting. I have written a few songs in my time too. If someone wants to know the ins and outs of putting a song together, I’ll teach that as well.”

THT: What is your webpage for your new school?

Bob: “I have new company and it’s called Super Power’s Music Academy and the website is”   http://superpowersmusic.com/

“My last show with the guys is on December 23 at the Canyon Club in Agoura Hills.”

Bob’s two last shows this year with the Dubs are at Muldoon’s Newport Beach, Sunday, December 3rd at 2 p.m. (It’s free) and The Canyon Club on Saturday, December 23rd at 9 p.m. Do yourself a favor and come out to both of these shows, you will not be disappointed.  Come talk to the band members who always come out to talk with their fans and anyone in attendance.

Muldoon’s ivy-covered double-brick building wins architectural awards because of our four unique spaces, including two distinct pubs, a beautiful patio and a charming dining room, all under one roof!

The Dublin Pub is our 1st bar, built in 1974 entirely of oak, brick and brass, with our bulldog mascot stunningly rendered in stained glass. This is the spot for a game of darts! Lots of TVs to catch your favorite game!

The Celtic Bar, added in 2000, is just across our patio and gives you the chance to go bar-hopping without leaving Muldoon’s! The perfect blend of rustic, industrial beauty! It’s truly ideal for booking your private parties! Lots of TVs in here for sports, too!

Our Tavern Dining Room, also built in 1974 from finely-crafted oak, is beloved for it’s real crackling fireplace, tall oak booths and hand-painted Irish proverbs along the coffered oak ceilings. It transports you across the pond, no passport required!

These three indoor spaces form a circle around our open-air Patio, with a graceful Sycamore tree in the middle that gives shade and dappled sunlight, making it ideal for al fresco lunch, dinner, Sunday breakfast, watching sports and listening to live music!

The Young Dubliners have built a fervent fan base comparable to that of jam band rockers like Phish and Dave Matthews Band. From their humble beginnings at the Irish Rover, the band evolved through various personnel changes into a pugnacious, crazy but coolly irresistible force of nature. “Even with all the touring we do, the thing that keeps us going is the one thing that never gets old,” says guitarist/vocalist Keith Roberts. “And that’s playing those older songs people love and then mixing in a new song and hearing a positive, excited reaction from the crowd for the first time. We’ve had our share of tough gigs too, but all it takes is that one great show, those perfect moments of band and audience communication, to appreciate what we’re doing up there and why. It’s all about the joy of performing, watching the people dance and hearing them sing along.”

There are skills that can be transferred to thousands of songs, once you have the key. There is a way that is faster, simpler, and more fun. Get guitar and bass lessons which give you a great general knowledge of music, and you get to playing songs you like, sooner. Would you embrace playing guitar more if you were able to play songs that you listen to and know? Yes!

From beginners to the accomplished, advancing on guitar or bass comes down to one thing: learning techniques used in songs. “Once someone learns a half-dozen songs, they have the ‘tools’ to grasp many more,” according to Bob. His style of explanation can connect with students of every age, and he teaches these underlying techniques to make progress satisfying, fun and easy. Lessons are customized for each individual student.

Bob Boulding is a professional musician and the lead guitarist of the Celtic rock band Young Dubliners. His teaching studio is based in Los Angeles, CA.  He has decades of individual teaching experience—in addition to over 30 years of playing guitar!

About the Young Dubliners

The Young Dubliners are quite possibly Celtic rock’s hardest working band, playing hundreds of shows to thousands of fans across the US and Europe every year. In recent years they have twice appeared on ABC’s Jimmy Kimmel Live.

Good Morning America had songs featured in TV shows (Sons Of Anarchy, Human Target) and toured extensively as a headliner and as the opener for such a diverse list of artists as Collective Soul, Jethro Tull, Johnny Lang, Los Lobos and many more. 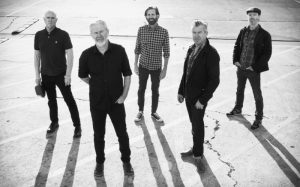 Although the Young Dubliners sound is most commonly called ‘Celtic Rock’, that label, as labels often can be, is misleading. The Irish influence is there, certainly, but it’s not the only influence that rears its head on their albums, or in live shows. After all, several of the band members have no Irish roots of any kind. “That was always the idea”, Keith Roberts, lead singer for the band explains. “The sound was always intended to be a hybrid because we all come from different backgrounds. Even though two of us are from Ireland, a lot of the music we listened to growing up wasn’t Irish at all, but when we got here, we got homesick and developed a new appreciation for Irish Music. In truth the Celtic riffs can just as easily come from the American band members. Everyone writes now so you never know what we’ll end up with when we start on a new album.

The last album (Nine) was the band’s first independently released effort. “We had a few label offers but decided we were well overdue to take things into our own hands,” says Roberts, “After eight albums on various labels it just seemed right to go it alone for once and maintain full creative control.”

However, “going it alone” did not mean without financial support and for that they turned to their fans. After only a month the band had received the necessary funds to complete the recording and the result is considered one of their greatest achievements to date.

But recordings aside this is still predominantly a live band. Relentless touring has garnered them a “following of the faithful” and this has allowed them to follow their dream year in and year out. “We are very appreciative of how the fans have continued to support the live shows. It makes for a crazy but enjoyable year despite the hectic travel schedule” says Roberts.