(Los Angeles, CA – September 24, 2021) – YES hosted the YES 20th Anniversary Celebration on Thursday, September 23, at The Maybourne Beverly Hills, where they honored Willow Bay and Bob Iger for their decades-long support of the organization. The Gala, which celebrated YES’ extraordinary 20 years of changing lives through education, brought in over $5M for the organization. The special event was hosted by select YES scholars and alumni, and was presented by The Walt Disney Company.

Mellody Hobson and David Geffen served as Co-Chairs for the Gala. The two took to the stage to introduce honorees Willow Bay and Bob Iger, and present them each with a YES Award for their generous contributions over the years. Beyond providing invaluable resources for students, Bay and Iger have personally advocated for and supported scholars, from arranging school transportation to championing grants and charitable partnerships. YES Founder and President Eric Eisner joined YES alumni and scholars onstage during the event, speaking about the organization and the many accomplishments of the students, and YES Executive Director Rebecca Tucker made a powerful appeal from the podium about the program. Throughout the evening, YES scholars shared their moving experiences with guests, detailing how the program has impacted their lives. TV personality Justin Sylvester hosted the auction, which saw former Bachelorette Rachel Lindsey handing out roses to donors during a rapid-fire donation round. Global superstar Christina Aguilera closed out the evening with an unforgettable performance, singing “At Last,” followed by “Reflection,” and “Beautiful.” 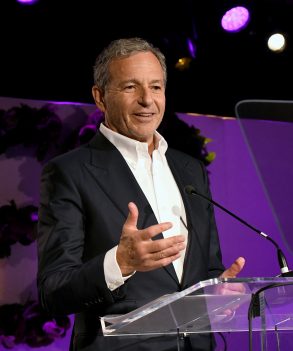 Founded by Eric Eisner, Young Eisner Scholars (“YES”) identifies academically promising students from low-income communities. Beginning as early as elementary school and continuing through high school, college, and career placement, YES provides long-term academic resources and holistic support necessary to make college and career success an attainable goal. Over 90% of YES scholars are first generation college students, and 85% are from households below the national poverty level. With 100% of scholars accepted to college and a 93% rate of college graduation, YES scholars have achieved successful careers at many of the most prestigious companies and institutions around the globe.

Young Eisner Scholars (YES) is a 501(c)(3) organization that identifies academically promising students from low-income communities in Los Angeles, New York City, Chicago, and rural Appalachian North Carolina. Beginning as early as elementary school and continuing through high school, college, and career placement, YES provides the long-term resources and holistic support necessary to level the playing field for many of our nation’s brightest minds. With 100% of YES scholars accepted to college and a 93% rate of college graduation, YES scholars enjoy successful careers at some of the world’s most prestigious companies and institutions. www.yesscholars.org.