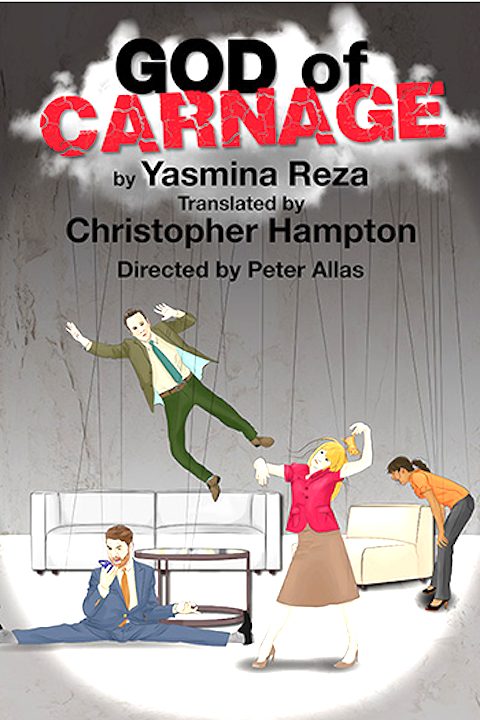 Los Angeles, CA (The Hollywood Times) 5/15/22 – The opening night of a new production of God of Carnage, Yasmina Reza’s Tony Award-winning comedy of manners took place on Friday, May 13, at the Odyssey Theatre in West Los Angeles. This darkly funny play is a visiting production directed by Peter Allas has a limited three-week run at the Odyssey Theatre, May 13 through May 29. Inspired by a real event and taking place in real time over the course of 90 minutes, God of Carnage is a comedy of manners… without the manners. When two 11-year-old boys have a playground fight, Henry’s parents invite Benjamin’s mother and father over for cocktails, hoping to discuss the situation civilly. But the veneer of polite society quickly falls away, and the evening deteriorates into an intense and darkly funny train wreck of finger-pointing, name-calling, tantrums and tears.

Translated from the French by playwright/screenwriter Christopher Hampton, God of Carnage, nabbed both London’s Olivier Award for Best Comedy and Broadway’s Tony Award® for Best Play. It hasn’t been seen locally since its 2011 run at the Ahmanson Theatre in Downtown Los Angeles. In a chat with the director Peter Allas, I learned that Yasmina Reza worked closely with Allas to approve casting of this current production. Taking on the roles of Henry’s parents are Lisa LoCicero, known to millions as Olivia Falconeri Quartermaine on General Hospital, and Matthew Downs, seen in Station 19 and Tacoma FD. Jack Esformes (Under a Black Cloud, currently streaming on Amazon Prime) and Leilani Smith (Home by Samm-Art Williams and the NAACP Best Ensemble Award-winning production of Flyin’ West, both at International City Theatre) play the “guests.”

Before the play begins, the backstory reveals that two 11-year-old boys (Henry and Benjamin) get involved in an argument because Henry refuses to let Benjamin join his “gang.” Benjamin knocks out two of Henry’s teeth with a stick. That night, the parents of both children meet to discuss the matter. Benjamin’s father, Alan Raleigh (Jack Esformes) is a lawyer who is never off his mobile phone. Freddy’s mother, Annette Raleigh (Leilani Smith) is in “wealth management” (her husband’s wealth, to be precise), and consistently wears good shoes.

Henry’s father, Michael Novak (Matthew Downs) is a self-made wholesaler with an unwell mother. Michael’s wife, Veronica Novak (Lisa LaCicero) is writing a book about Darfur. As the evening goes on, the meeting degenerates into the four getting into irrational arguments, and their discussion falls into the loaded topics of sexism, racial prejudice and homophobia One of the central dramatic moments of the play occurs when Annette vomits on stage, all over the coffee table and Veronica’s art books.

Yasmina Reza is interested in people behaving badly. hoping to discuss the situation civilly. But the evening deteriorates into an intense and darkly funny train wreck of finger-pointing, name-calling, tantrums and tears. And that’s before they break out the rum. As she sees it, Reza explains: “My plays are about people who are well-raised but who lose control of themselves. My characters are for the most part impulsive by nature. You could describe my plays as being a theater of nerves.”

In an interview, Reza explained her inspiration for God of Carnage: “In the street, while returning from school with my son, I was talking to the mother of one of his classmates. Her son had suffered a broken tooth following a fight on the playground, and she said this to me: ‘Do you realize: the parents haven’t even called to apologize!’ I immediately thought that there was an interesting theme here.”

Working once again with British playwright Christopher Hampton as translator, she has written an acidic exploration of middle-class savagery and liberal hypocrisy. Reza, who was born in Paris and is of Hungarian and Persian heritage, stands virtually alone as a foreign-language playwright able to break into the contemporary Broadway scene. Her comedy Art won the Tony for best play in 1998 and went on to become one of the most performed plays in regional theaters across the U.S. Her other plays include Life x3, The Unexpected Man and Conversations After a Burial. Hampton has translated most of Reza’s plays to English. The London-based writer won a screenplay Oscar in 1989 for Dangerous Liaisons adapted from his own play, and two Tonys in 1995 for the book and lyrics to the musical Sunset Boulevard.