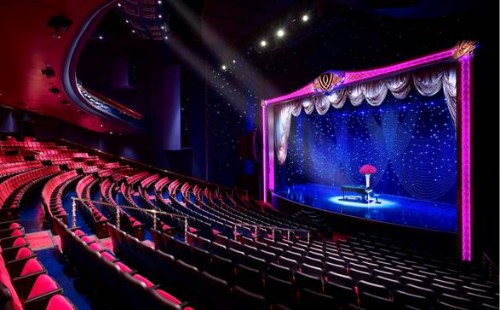 AT ONLY 1,480 SEATS, ENCORE THEATER IS THE SMALLEST VENUE ON BILLBOARD’S UNDER 5,000 CAPACITY LIST

Las Vegas (January 16, 2020)—Wynn Las Vegas’ Encore Theater was just named in the Top 10 highest grossing venues globally in 2019 under a 5,000 seat capacity, according to Billboard magazine. The versatile 1,480 seat venue sold more than 120,000 tickets grossing over $16.2 million through the 96 shows included in Billboard’s reporting period of Nov. 1, 2018 through Oct. 31, 2019. This is Encore Theater’s first time making the Top 10 list and, according to Billboard reporting, ranks the venue as the top grossing under 2,000 capacity theater worldwide.

“We are fortunate to have a world-class intimate theater with amenities typically associated with much larger venues,” says Rick Gray, General Manager of Entertainment Operations at Wynn Las Vegas. “We take pride in offering our artists the same impeccable hospitality on which Wynn has built its reputation. This combination has allowed us to attract top tier entertainers that are usually seen on bigger stages.”

Adds Chris Hammond of AEG Presents Las Vegas: “We made a concerted effort last year to introduce a broader range of entertainment at Encore Theater, including the addition of stand-up comedy. The design and versatility of the room provides for that intimate club-like setting for a comedian with a stool and microphone one week — that can be seamlessly transformed to a massively produced rock show the next.”

The Hollywood Times was able to attend the Chris Rock show and what a show it was. Here is the link to read all about why you should visit the Encore Theater at Wynn Las Vegas: