Los Angeles, California (The Hollywood Times) 7/01/2021-  THE BODY FIGHTS BACK is a feature documentary about five people navigating the paradoxes of diet culture. While promises of happiness, desirability and perfection are irresistible, joy and contentment remain out of reach. Personal stories from vastly different backgrounds quickly merge into a shockingly similar experience of battling one’s body. Self- starvation and compulsive exercise bring temporary satisfaction, only to be replaced with binging and purging soon after. Surprisingly, none of it has much to do with food. Featuring exclusive footage from London’s contemporary anti-diet movement and fascinating personal archives, the film offers a unique insight into the complexity of eating disorders, body image struggles and most importantly, the socio-economic realities of health.

Marian, You began your career as a health journalist. How did your experience build a foundation for your new film, The Body Fights Back?

The media is constantly looking for ways to get us hooked – from clickbait headlines to flat-out harmful nutrition advice. You can’t quite grasp the mechanism until you become part of 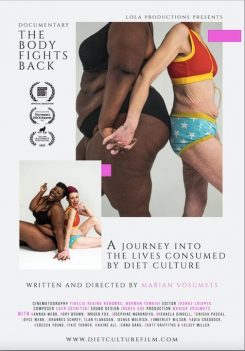 Tell us about The Body Fights Back.

The film follows five young British people who suffered from eating disorders for years and fought heartbreaking battles with their bodies. At its core, the film disputes conventional beauty ideals and exposes the ways in which diet culture operates. It’s a documentary that digs deep under the surface. Most of our insecurities are shaped in early childhood, affected by trauma, ridicule and feelings of inadequacy. Troubled eating then becomes just the tip of the iceberg, rooted in a desire to be noticed and admired for external, aesthetic achievements, if nothing else. And that of course feels highly rewarding, especially in today’s society which places a huge premium on beauty for all genders.

How did we get here?

Diet culture is a combination of false messaging around health and market forces that profit off of people’s insecurities. We tend to associate health with thinness, which makes it all the easier to sell slim shakes and fasting rituals. However, the human body is not necessarily designed to display a full six pack at all times, but rather to serve as a vessel for getting us through whatever life throws at us. On the other hand, controlling our food intake and micromanaging every aspect of our training is a strange kind of coping mechanism. It provides a framework of certainty when feeling like we can’t control other aspects of our lives. There is a lot of unlearning and self- examination to do in order to be able to properly assess what it is that we’re going through and why hardships tend to manifest in self-punishment. The main characters in The Body Fights Back are brilliant examples of overcoming such hurdles.

You have masterfully combined visuals with narrative. What surprised you the most during the journey?

Filmmaking for me is the most calming and rewarding form of art. In this particular film it’s fascinating to see how stories from people who’d never met each other, interlink so perfectly. It’s as if they’re filling in and building on each other’s lived experiences, merging into one powerful narrative.

Many moments took me by surprise during the making of it in 2019. Intense interviews that lasted for over 2 hours bringing up emotions that are hard to contain. I didn’t expect to hear from the most handsome young man that his eating disorder pushed him to the verge of taking his own life. Nor was I prepared to see the most loving mother in tears over her daughter’s 7-year battle with anorexia. It takes resilience and bravery to speak up in front of lights and Cameras. 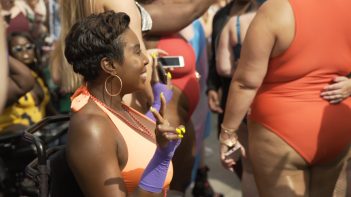 Is the diet culture about social currency?

Diet culture is all about social currency. It has nothing to do with health, however hard it tries to hide and rebrand itself as wellness or health support. It’s particularly evident when we look at how society treats thin people differently, rewarding attractiveness with better positions.

I myself have been on the receiving end of thin privilege for most of my life, which always makes me highly self-conscious when speaking about it. Straight-sized white women should not be the front and centre of this conversation. That’s why The Body Fights Back features the most diverse spectrum of bodies – it’s paramount that people from different backgrounds can freely express what it feels to be discriminated against, based on looks, disabilities, skin tone and body size. It’s a very unequal world.

The film highlights the newest research findings in Nutrition and Weight Science. Tell us more.

The general approach in medicine has to change. Large bodies are not to blame for a food environment that makes it increasingly hard to take any personal responsibility. Nor should it be a moral imperative to dictate what people eat.

Instead, new generation health practitioners have adopted what is called the Health at Every Size (HAES) approach. HAES focuses on body respect and health gain through a more compassionate professional intervention. It’s an interesting blend of science and social justice, whereby we accept that BMI is not an accurate health indicator and encourage people to engage in joyful movement instead of excruciating exercise.

It also advises adding more nutritious foods to one’s menu, rather than presenting the person with a list of foods to avoid. In a medical setting, the latter backfires all too often, driving people into further yo-yo dieting and causing them to avoid doctors altogether.

I remember arriving back in London with Imogen Fox and the cinematographer, after a full day of filming in Bristol and heading straight to a Fat Positive standup show. The event was hilarious, followed by drinks with the performers and activists in that very church building where it was held. Next thing you know we’re wrestling with the bouncer at 4am in some pub in East London, refusing to accept that everything had closed.

What’s more, we had a studio booked for 9am to shoot the film poster. So we proudly picked ourselves together and absolutely nailed it. Imogen and MoJo are true superstars – and proof that working off enthusiasm and adrenaline is definitely possible, however not advised.

Where do we go from here?

It’s crucial that we start having honest conversations about body image with our partners, friends and family. The shame and guilt around not being good enough is what fuels disordered eating and overcomplicates close relationships that are essential to our

Wellbeing. We need to start paying closer attention to the ways in which diet culture operates. The weight-loss mentality is one that is so embedded in our culture and interactions that it’s almost hard to realise. From diet talk to food labelling, gym bro language to Instagram influencers that sell starving for a living – this constant bargaining in our heads of whether or not we are allowed to eat becomes second nature, so it’s important to ask where did we learn those behaviours in the first place. Making peace with bodies doesn’t come overnight, but it is possible. Instead of forcing yourself to be all positive from the get-go, you may start with body neutrality – appreciating that human bodies are instruments, not ornaments makes for a good starting point. Just think of all the ways our bodies keep us alive – that in itself is powerful.