Hollywood, CA (The Hollywood Times) 12/3/21 – December 1 was World’s AIDS Day and in Los Angeles at the LA Forum was a free World AIDS Day Concert hosted by the AIDS Healthcare Foundation titled “The LA Revival.” The program featured Oscar and multi-GRAMMY winner Jennifer Hudson and multi-GRAMMY winner Christina Aguilera performing live, and multi-EMMY nominated comedian and internet sensation Randy Rainbow hosting the evening at The Forum in Inglewood. The concert was produced with longtime AIDS Healthcare Foundation partner Debbie Allen and featured a performance by young students from her Debbie Allen Dance Academy (DADA). The free concert was sold-out, given some accommodations for COVID. As HIV/AIDS continues to be a pressing matter in our world today, Los Angeles brought its gift for top quality entertainment out in full force last night on World AIDS Day, with a unified mission to shine a spotlight on the difficult past, the great progress made today, and the hopeful future in the fight against this epidemic.

The first of the evening’s two headliners was Hollywood and music superstar Jennifer Hudson, singing “And I Am Telling You I’m Not Going” from her Oscar-winning performance during this 15th Anniversary of her 2006 film Dreamgirls. Hudson also took on songs from her recent portrayal as Aretha Franklin in the biopic Respect and concluded her set with a captivating rendition of “Hallelujah” which she told the crowd is her favorite song and her favorite song to sing. “This has been a dream,” Hudson revealed on-stage. “It’s so amazing to be here for such an amazing cause. At a time like this, I love to look around the room and see everybody. If you notice, I try to get to every single one of you in this room ‘cause we all matter.”

At the event, U.S. Senator Bernie Sanders was honored with AHF’s Lifetime Achievement Award. Sanders was unable to attend but his wife Jane Sanders was present at the event and accepted the award on his behalf. Senator Sanders then took over the video screens with a special pre-recorded message saying, “Let me thank the AIDS Healthcare Foundation for the very kind award they’ve bestowed on me. I appreciate it very much. Let me also join with you today in commemorating World AIDS Day and in doing everything we can together to rid the world of this terrible disease. Let me conclude by thanking my wife Jane for accepting this award for me and for all the great and important work she has done over the years in so many areas.” 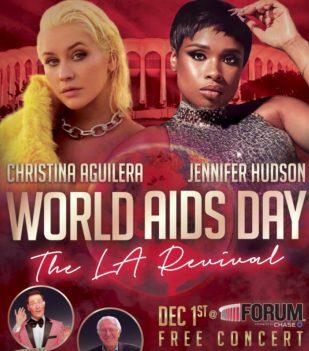 The night ended with a powerful performance from the event’s co-headliner, international pop superstar Christina Aguilera, belting out her crowd-friendly hit songs including “Ain’t No Other Man,” “Lady Marmalade,” and “Beautiful.” Before singing her emotional song “The Voice Within,” Aguilera took a moment on-stage to speak to the audience and shared an empowering message to help wrap up the entertaining and informative evening. “Today is such a special day. I’m so honored to be here for World AIDS Day with all of you. I am so inspired by all the amazing work that the AIDS Healthcare Foundation is doing. Incredible, massive, so important. We are fighters and we’re in this all together.”

Under its “Keep the Promise!” banner, the AIDS Healthcare Foundation also acknowledged progress made in the global fight against HIV and AIDS and continues to raise awareness about “The Other Pandemic” as a reminder of the significant work still to be done on HIV/AIDS. “The effects of the AIDS epidemic are very personal for me, as I had many friends and loved ones who passed away from this deadly virus. World AIDS Day allows me to celebrate those lives lost and commemorate their various contributions not only to our personal relationships but also to film, television, dance, and more,” said Debbie Allen. “Having a longstanding partnership with the AIDS Healthcare Foundation is a prime example of how the community should support and uplift one another. It is crucial for us to understand that this fight is far from over. Forty years ago, AIDS was first recognized by the CDC, and 40 years later we have lost millions of lives. I’m committed to continue to do my part in bringing awareness to HIV/AIDS, and I encourage you to do the same.”

Allen shared with me her dedicated purpose in choosing to lend a hand in this fight against HIV/AIDS, as she continues to lead the way as an influential figure in the entertainment industry today. “We know that if any community was hit hardest by AIDS, it was the art community, the dance world. I buried half my boys from Fame. My kids are here to celebrate life and celebrate the joy of what can be, while they’re also needing to be aware of what is happening around them. Everybody’s talking about Covid but they need to not forget that AIDS is prevalent in killing millions of people every year.” 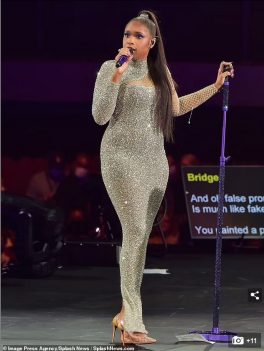 As the world continues to navigate the deadly global COVID-19 pandemic, the AIDS Healthcare Foundation is taking a moment to note that this year also marks forty years since the first cases of AIDS – “the other pandemic” – were first reported. To date, 33 million have died of AIDS and more than 38 million people worldwide today are thought to be living with HIV, according to the CDC.

“World AIDS Day provides an opportunity for us to mourn and mark this somber forty-year milestone,” said Michael Weinstein, president of the AIDS Healthcare Foundation. “However, 2021 also marks the thirty-fifth anniversary of what has become today’s AHF. From providing compassionate AIDS hospice care in those darkest early days to growing to become the largest global AIDS organization today, now providing lifesaving care and treatment to more than 1.6 million people around the globe. As we mark and mourn, we also celebrate all those who help make today’s AHF possible: our staff, Board, affiliate organizations and affinity groups, friends, family and wonderful community partners like Debbie Allen, but most of all, our clients and patients – with our 2021 World AIDS Day event. We are excited to present what we expect to be knockout performances by Christina Aguilera, Jennifer Hudson, students from Debbie Allen’s Dance Academy and honoring Senator Bernie Sanders, among others.”