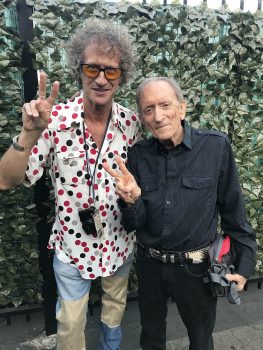 I interviewed three of the amazing Woodstock photographers and here’s what they had to say.

Jimmy Steinfeldt: Jason, tell me something about your Woodstock photography.

Jason Laure: I’m not a full time music photographer. This was my contribution in the 60’s. I had done the Summer of Love, and also Anti War events. I learned about Woodstock through alternative newspapers in June, and July of 1969. I also heard about it through friends at the Hog Farm with Wavy Gravy based in New Mexico. They were brought out to Woodstock as sort of hippie security, which actually worked. A half a million people got together for peace, love, and music. I think this was a glitch in time. I don’t think it will ever happen again in this way and in this fashion.

I had one of the best times in my life. I was fortunate to have credentials so I could come and go. I would do the stage mainly at night and during the day I would do the so called communal. My famous nudes in the pond are all in my book Woodstock 1969: The Lasting Impact of the Counterculture. In the last chapter I talk about issues such as Environmental, Gay Rights, Women’s Rights that came out of this period. I thought Woodstock would be a bright spot and something less painful than some of the other stories I’d been covering. 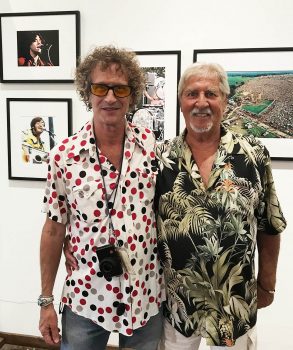 JS: Where can our readers learn more about you?

JL: Africatrek@aol.com. I live in South Africa and I am developing a new website:  Jasonlaurephotography@gmail.com

JS: Tell me about one of your photos. 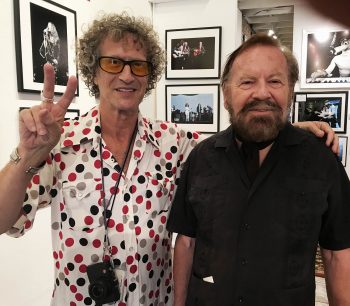 JL: I like to work close to the performer. You get the emotion. I was so close to Janis Joplin, less than 10 feet when I took this photo. I got her sweat while she performed. She was a passionate performer. I miss her a lot. I didn’t use a telephoto lens. That meant I was right up close when I took these photos. I did photos at the Fillmore East in the East Village in New York for a few years after Woodstock. Then I stopped. These acts gained such prominence they were put on big concert tours in big venues by the music moguls. That didn’t interest me.

JS: You mentioned the Fillmore. Did you know Bill Graham? 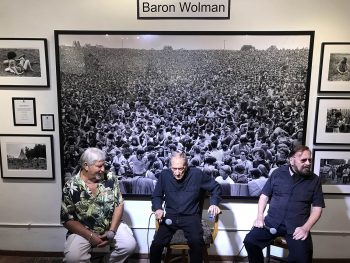 JL: Yes, he was cranky. However I’ve been to Haight Ashbury recently and I could swear it’s the same people asking for spare change as when I was there in 1967 photographing shows in Golden Gate Park.

Jimmy Steinfeldt: Tell me about Woodstock. 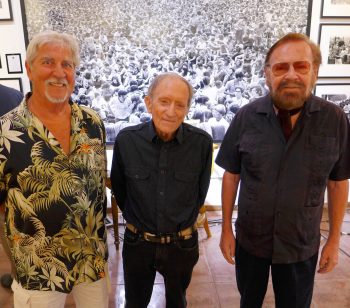 Barry Z. Levine: I knew all about upstate New York because I worked as a bar-boy at the Catskill mountain resorts: Granit, Concord, Grossinger’s, Tamarack, Kutshers, Brown’s, and many more. I grew up 30 miles from Bethel in Kerhonkson a town of 1,200. I worked for Columbia Records during the time of the Woodstock festival as a writer, producer. I heard the talk about this festival that was going to have Jimi Hendrix, Janis Joplin, the Grateful Dead, and Blood, Sweat & Tears, which was the biggest band of 1969. No one had heard of Santana, he hadn’t even released an album.

I decided to go up and check it out. The first person I saw was Larry Johnson. I had worked with him previously. We began to visit and he said he was there to work on a film about the festival but he didn’t even have a deal yet. He asked me what I was there for and I said I just came to look around and take a few pictures. Larry jumped on that and said they needed a still photographer on the crew. “We don’t have any money to pay you up front but will you do it?” I said “I’ll do it but since you don’t know if you can pay me I own the photos.” He said OK and that changed my life for the last 50 years. The whole thing was that casual. Larry later was nominated for the Academy Award for sound for the movie. 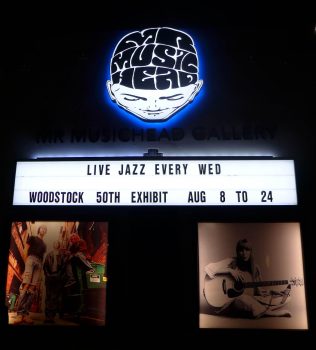 JS: Tell me something about one of your amazing photos.

BL: Richie Havens opened the show and he kept playing and playing because he was the only artist there and the music was already three hours late in starting. He knew the audience had been waiting and he was afraid they would throw bottles and cans at him. He kept looking down at his shoes just to keep his head down so as not to get hit in the face with something. Of course nothing bad happened. He concluded by singing Sometimes I feel Like a Motherless Child and that turned into his riffing on Freedom.

Freedom was what Woodstock was all about. Women for the first time maybe ever were swimming naked in the lake, walking around topless. Without fear of being molested, assaulted, or raped. There wasn’t one fight or burglary or stabbing or murder and there were 500,000 people there. Much of the time people were in the rain, under the hot sun, without enough food or water or toilet facilities. Richie Havens really set the tone for the entire festival. Richie was the greatest. Even at other festivals I would see him talk to folks and he would sign autographs until the last person got an autograph.

JS: Where can people learn more about your photography?

Jimmy Steinfeldt: Tell me about your experience at Woodstock.

Baron Wolman: There’s the thought of Woodstock and there’s the legend of Woodstock. The fact that we are talking about it 50 years after the event says it means something in people’s eyes. That it stands for something really important. Mainly the opposite of the life we are living now. For three days there was peace, love, and music. There was no violence. Now you read about violence everyday in the paper. We, the counterculture that I was part of, thought that Woodstock was a beacon to show people that it could be done and how it could be done. Unfortunately, humans being who they are, it wasn’t done and we find ourselves in the conundrum we are today. As an experience it was mind-boggling. Woodstock had four or five hundred thousand people. It was the fourth biggest community in New York and all gathered in that one place. The promoters didn’t even expect that. The people who came didn’t expect it. The musicians didn’t expect it. I didn’t expect it. I realized the gathering was probably more important than the music itself. Music happens every weekend, happens all the time. But a gathering like that happens only once and it could never be repeated. It was evolutionary, and revolutionary. I’m so glad I was there.

JS: You are here today with two other fine photographers. Can you tell me about any interaction between you and other photographers at Woodstock?

BW: Everybody remembers the photographer Jim Marshall. Jim went up to John Morris the production manager at Woodstock and said “John, you let me stay on stage for the whole festival and I’ll kick out all the other photographers and make them go into the pit.” John said OK Jim you’re on. As a result there were very few of us still photographers on stage. I was covering the event for Rolling Stone but Jim and I were both there also for a book we were working on Festival! The Book of American Music Celebrations. Jim was stoned as he always was but his pictures were all in focus. I don’t know how he did it.

JS: Where can people learn more about you?