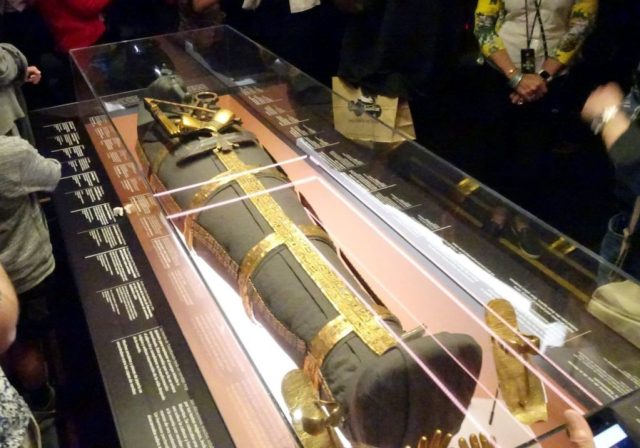 –by Dr. Laura Wilhelm, LauraWil Intercultural
Los Angeles, CA (The Hollywood Times) 8/16/18 – Explore a fascinating empire and discover why Egypt’s unique treasures have captivated the world for over 5,000 years at the California Science Center’s “KING TUT: Treasures of the Golden Pharaoh” exhibit!  What a perfect way to relax and unwind at the end of another long, hot summer in SoCal.

This landmark exhibit was specially curated to celebrate the 100th anniversary of the discovery of King Tut’s tomb and is the largest one of its kind ever to leave Egypt.  It features over 150 artifacts, 60 of which have never been on display outside their native land.

The top floor exhibition galleries at the California Science Center immerse guests in the story of King Tut’s journey through the underworld to the afterlife, and guests learn the role of these burial objects in the pharaoh’s quest for immortality.  The final chapter on the first floor presents the story of Howard Carter’s sensational discovery of Tutankhamun’s tomb in 1922 and what subsequent scientific analysis has revealed about King Tut’s life.

King Tut’s tomb remains the richest and most intact royal tomb ever discovered in Egypt.  Both the quantity and quality of the objects advanced researchers’ understanding of the beliefs and cultural practices of the ancient Egyptians.  In addition, Egyptologists discovered technological innovations which continue to be studied and debated to this day in this very tomb.
This exhibit does NOT include the world-famous golden Death Mask that traveled all over the globe in the 1970s.  Like millions of others, this reporter has fond memories of the mask, which along with her has become fragile with age.  The Death Mask remains at the Egyptian Museum in Cairo for safekeeping, and the Egyptian government has decided that it will never travel again. 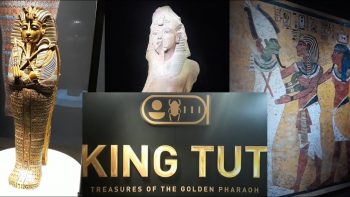 As for King Tut’s mummy, it remains entombed in the Valley of the Kings.  King Tut’s premature death at the age of 19 remains one of the world’s greatest unsolved mysteries.
Learn about this ancient puzzle at the California Science Center located at 700 Exposition Park Drive through Sunday, January 6th, 2019!  Most guests average 60-90 minutes per visit. 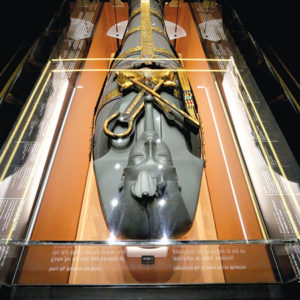 The King Tut exhibit is complemented by a 40-minute IMAX film called “Mysteries of Egypt” narrated by legendary Egyptian-born actor Omar Sharif.  You will accompany the National Geographic team as they uncover the secrets of the pharaohs’ tombs and the pyramids.
Soar over the great pyramids of Giza, rush over the Nile, cross the deathly quiet Valley of the Kings, and descend into the shadowy chambers of the sacred tomb of King Tutankhamun on the CSC’s 7 story IMAX screen, one of the largest ever built.

The discovery of King Tut’s tomb and the treasures it included turned this minor king into an overnight celebrity, influencing art, design, and fashion for decades.  Can anyone ever forget Steve Martin’s King Tut comedy routines?

Advertisement
This is said to be the LAST TIME Tut’s treasures will tour the world.  Ticket sales are helping to finalize the permanent King Tut wing at the Grand Egyptian Museum, which will be the largest archaeological museum on earth!  Audio guide rentals are available in English, Spanish, and Mandarin for this summer’s HOTTEST ticket.
For tickets and more information, please visit
https://californiasciencecenter.org/exhibits/king-tut-treasures-of-the-golden-pharaoh