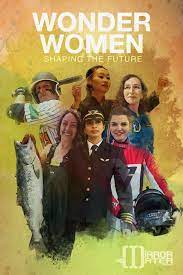 “Your presence is your power!”–Tianyi Lu
—by Dr. Laura Wilhelm, LauraWil Intercultural
West Hollywood, CA (The Hollywood Times) 12/14/21 – German-American filmmaker Christina Rose and her brother Michael of MirrorWater Entertainment are busily rolling out an ambitious six-part documentary series called WONDER WOMEN: SHAPING THE FUTURE.  Featured in the series are six women from all over the world who are making successful careers in which females are historically underrepresented.
The film subjects are as follows:
Episode 1: Making Waves with Marie Rose (USA)
Episode 2: The Climb with Suzanna Randall (Germany)
Episode 3: Comeback with Vivien Keszthelyi (Hungary)
Episode 4: La Familia with Diamilette Quiles Alicea (Puerto Rico)
Episode 5:  A Woman’s New World with Tianyi Lu (China)
Episode 6: Endless Learning with Anny Divya (India)
Christina recently hosted a series of YouTube panels during which all six of the films were discussed in exhaustive detail.  Dominic Jackson moderated the first six panels.
At the final panel, all six women finally met virtually for the first time!  This two-hour session was moderated by Chris Schwartz.
All of the WONDER WOMEN panels may still be viewed on the following site:
VIRTUAL SCREENING | MWE (mirrorwaterentertainment.com)

Christina was kind enough to offer still more commentary on the internationally-themed series in this exclusive interview.  Hooray for Hollyworld!
Why do you think women are underrepresented in the six industries showcased in your WONDER WOMEN series?
We are living in a male-dominated patriarchal society–all over the world.  I think the only single country that is ruled by women when it comes to the majority of parliamentarians is Rwanda, and am not sure if this is still accurate after the pandemic.  That’s our reality, and there are many other industries where women are underrepresented.
We are hurting ourselves if we cannot find a way for there to be equality in this world.  Not just between men and women but also in terms of race, religion, etc.  We’ve still got a long way to go!
It looked like filming very active people such as aviators and race car drivers was an adventure in itself!  Do you consider yourself a Wonder Woman?
I’m just the messenger of these six exceptional stories.  And I only hope that bringing on the people I collaborated with, will enhance their careers as well.
The filmmaking industry is just as underrepresented as the WONDER WOMEN industries and I’m just very tired that truly not much has changed.  I’m fighting for myself and I will continue to help and support filmmakers who aren’t getting an equal opportunity.
Advertisement
Did any of the Wonder Women particularly resonate with you, or do you not want to play favorites?
All six women have fascinating stories and powerful messages to share.  There’s certainly something I have taken away from every single woman.
Of all the remarkable talents you managed to assemble for WONDER WOMEN, I thought the musicians really stood out.  Please comment.
The soundtrack for each episode is fantastic.  I just bring creative and talented people together, and that’s what I enjoy most.  Music is certainly an important part of the series.  I’m really lucky to work with two very talented composers who helped make this series better and all the credit goes to them.
Advertisement
I agree that Ray Salazar’s choir of angels is enormously important to expand the themes found in the WONDER WOMEN series.  What other kinds of women might you like to feature in future installments, if any?
There are so many other industries where women are underrepresented–from Presidents or Prime Ministers to mechanical engineers or horse jockeys.  We have so many more women we’d like to feature and hopefully we will have that opportunity in the future.
What message would you send to anyone who wants to become a Wonder Woman?
Whatever you set your heart to, it’s possible!  There will be obstacles along the way that one will have to overcome, but those are necessary obstacles that will allow you to grow as a person and become that Wonder Woman.