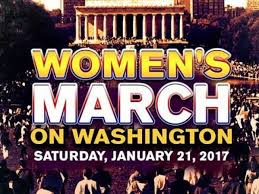 Washington D.C. (The Hollywood Times) 1/21/17 – After one of the most divisive elections in our nation’s  history it is no shock that Trump’s inauguration was a day of confusion, misinformation, and uncalled-for violence.

Yes on Saturday morning,  Washington, D.C. dawned gloomy but unseasonably warm, to thousands upon thousands of pink pussy hats making their way towards the National Mall.

The Women’s march on Washington grew out of a passion and frustration in the aftermath of a contentious election. It lacked formal leadership, organization, and defining principles. When a platform began to tentatively grow, it’s lack of diversity was an instant flashpoint. In the days leading up t the march, pro-life groups quietly infiltrated the ranks of allied groups, threatening a carefully curated, progressive platform.

None of these issues were apparent on Saturday morning. The only problem was a sheer force of numbers. Before anyone could open the program, the march route was filled with pussy hats. The jumbo-trons were visible by a scant few participants. The activists, actresses, and singers performed for portions of the crowd as it slowly wended around the march route and the many overflow routes police had to quickly open throughout the morning.

Gays against Guns, with marchers clad in white veils and images to the slain pulse victims, sang mournful and cheeky tunes about the 45th president of the united states. Marchers with no hope of seeing the official program joined in, carrying signs of warning of the imminent danger of climate change, the injustice of DAPL, the many, and the varied transgressions of  Donald Trump. Different chants broke out, “Can’t build a wall, hands to small” and “We want a leader, not a creepy tweeter”, and “Black lives matter!”. There was no one clear message, no one action or comment that the crowd focused on, it was a patchwork every issue that was on the line in 2016.

And yet this march was unified, a clear censure of Donald Trump and the racism, sexism, and xenophobia his campaign and election fomented. The varied issues women were marching for did not pull apart the march, as detractors had warned, but brought together women (and quite a few men) who believed that fighting for all of these issues, not compromising, was the only way forward.

It was disorganized, overcrowded, a display of grassroots action that reverberates around the world.

In other words, it was the exact event, on his first full day in office, to truly get under the 45th president’s skin.