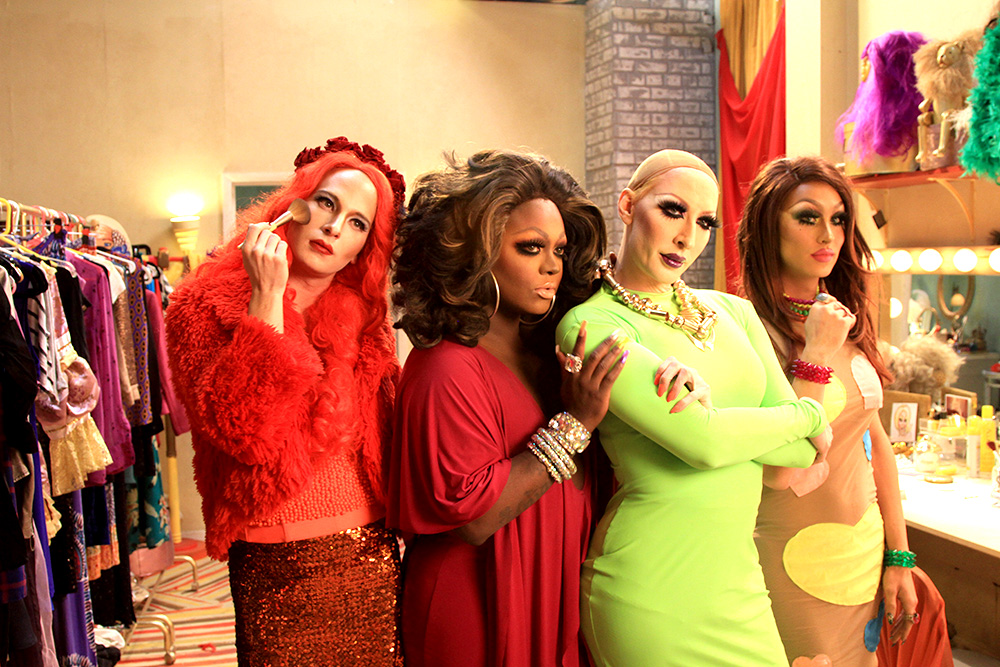 NEW YORK, NY (May 18, 2017) — CHERRY POP, the uproarious new comedy starring Caldwell Tidicue (Bob The Drag Queen), will premiere around the country this summer in a series of special screenings, as announced by distributor Wolfe Video today. The film will premiere in New York on June 19 as part of NYC Pride, followed by a special screening event on July 11 in San Francisco, and a Los Angeles screening to be announced. CHERRY POP will then be available worldwide on VOD this Fall.
Directed by Assaad Yacoub, CHERRY POP follows one night in the life of a failing drag bar and its colorful performers—from the backstage backstabbing to the onstage antics. When a newcomer (Lars Berge) arrives for his first night performing, he struggles to find his place amidst the raucous regulars, the vicious clique of performers, and one legendary queen coming to terms with life after her last night in drag. The film also stars Caldwell Tidicue (Bob The Drag Queen), Detox, Latrice Royale and Tempest Dujour.
On June 19, the film will premiere as part of NYC Pride’s OutCinema event—a one night  celebration of LGBTQ pride and community on film, in partnership with NewFest and the SVA Theatre. The specially curated screening will include a Q&A with the filmmaker and select cast, and be followed by an after-party at the SVA Theatre.
The legendary Castro Theater will host the San Francisco premiere of CHERRY POP on July 11th. A Los Angeles premiere will be announced at a later date.
“As the leader in LGBT film distribution, we are thrilled to bring Assaad Yacoub’s wonderful and wacky world to audiences around the country this summer,” said Jim Stephens, President of Wolfe Video and Wolfe Releasing. “CHERRY POP radiates an irresistible queer vibrancy that makes NYC Pride the perfect venue to host our New York premiere. We are excited to also bring the film to San Francisco and then to fans around the country on VOD this Fall.”
“We’re thrilled to partner with NewFest and the SVA Theatre to bring back OutCinema for a second year,” said Chris Frederick, NYC Pride Managing Director. “CHERRY POP’s premiere during NYC Pride celebrates the LGBTQ community in new and electrifying ways.”
“It’s wonderful that CHERRY POP will premiere at OutCinema during New York City Pride Week,” said Robert Kushner, Executive Director of NewFest: New York’s LGBT Film & Media Arts Organization, “as the film celebrates uncompromising individuality–exactly what pride is all about. We look forward to sharing this festive feature with New York audiences, and then toasting to the strength and unity of the LGBTQ community at OutCinema.”
The film will be available worldwide on VOD platforms this Fall. To purchase screening tickets and for more information, visit www.cherrypopfilm.com.
ABOUT WOLFE VIDEO
Founded in 1985 and now celebrating over 30 years as the largest exclusive distributor of lesbian, gay, bi and transgender (LGBT) films, Wolfe’s release slate includes some of the most popular LGBT films of 2016, including the Thai Oscar submission How To Win at Checkers (Every Time); Henry Gamble’s Birthday Party; Portrait of a Serial Monogamist; Naz & Maalik; Margarita With A Straw; You’re Killing Me; Those People; Parched; and Hurricane Bianca.
In 2015, Wolfe released the Swiss Oscar and Golden Globes submission The Circle; the gorgeous lesbian drama by renowned Venezuelan director Fina Torres, Liz in September; and the epic international production by Finland’s Mika Kaurasmäki, The Girl King. Wolfe’s library of beloved modern classics includes such acclaimed hits as Reaching For The Moon, Cloudburst, Undertow, and Big Eden.
Wolfe’s complete motion picture library can be found at WolfeVideo.com as well as at national retailers such as Netflix, Amazon and VOD destinations such as Comcast, Time Warner, Hulu, iTunes and WolfeOnDemand.com.
ABOUT NYC PRIDE
Heritage of Pride, Inc. is the volunteer-directed organization behind the official NYC Pride roster of events. The 2017 roster will include more than 13 different Pride events for LGBT and allied people of all ages, taking place during the last two weeks of June. Heritage of Pride’s mission is to work toward a future without discrimination where all people have equal rights under the law. We do this by producing LGBT Pride events that inspire, educate, commemorate and celebrate our diverse community.
For more information about Heritage of Pride and NYC Pride, including opportunities to volunteer, sponsor, or purchase tickets, visit http://www.nycpride.org/.
ABOUT NEWFEST
Founded in 1988, NewFest is a non-profit 501(C)(3) dedicated to giving voice and visibility to the full spectrum of the LGBT experience through year-round screenings, community empowerment programs, and our signature annual event, New York’s LGBT Film Festival.
As the largest convener of LGBT audiences in New York, we proudly shine a light on the diverse stories that make our community unique, while nurturing and supporting the filmmakers whose work inspires dialogue, shifts cultural bias and creates positive change.
For information on our programs, partnerships, or how to support, visit www.NewFest.org.