Hollywood, CA (The Hollywood Times) 10/11/17 – “Without hope, we have nothing” and “no tears in your eyes, no rainbow in your heart.”  These were some of the opening words by icon and living legend Jane Goodall as she addressed the audience at Hollywood School House on Sunday, October 8, 2017. Few people elicit from the audience such heartfelt emotions of respect and gratitude as the scientist turned activist.

After spending a half-hour speaking with children and telling them her story of living in Africa with the chimpanzees and patiently and joyfully answering their questions, she took the podium to speak to an audience of adults and children who anxiously awaited her arrival.

The head of the parents association, the one responsible for bringing Goodall to the school, choked back tears as she introduced her. Anxious parents excited to hear her speak and introduce her to their children greeted her with a standing ovation before she spoke a word. The outpouring of admiration and love was uncommon and profound. 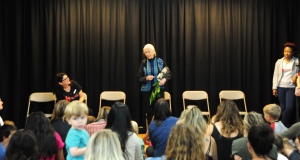 Goodall began by telling the story of how she came to be the naturalist that we know today. She spoke of her early childhood and being curious about how hens laid eggs, as well as a charming story about her early fascination with earthworms. She let us know about her mother, who encouraged her and nurtured her curiosity and ambition.  Goodall holds her mother in the highest esteem and attributes much of her success to the care and encouragement her mother provided throughout her life.

Goodall came of age in the 1940’s during WWII with little money and professional encouragement of women were both in short supply. After high school, Jane wanted to go to Africa and study animals but was told by everyone except her mother that it wouldn’t be possible. She lacked the means and she was “only a girl”. Because of her lack of funds, she decided to go to secretarial school so she would have a skill, though it bored her profoundly.

As fate would have it, a friend living in Kenya invited her over to visit. Despite her financial circumstances she was able to raise the money and go. Once in Kenya she met the famous paleoanthropologist and archaeologist Dr. Louis Leakey who happened to need a secretary. Her knowledge and ambition impressed Dr. Leakey who asked her to spend six months observing chimpanzees in the jungle. Having no idea what she was going to do, and needing a companion to go with her, she called her mother and off they went.

Goodall spent every day from sunrise to sunset and sometimes longer in the jungle observing the chimps. Her mother stayed in the camp with the guides and the occasional orangutans that would come into the camp to steal food. Jane would return to camp frustrated that she hadn’t been able to observe anything useful and didn’t want to let Dr. Leakey down. Fueled by her desire to succeed and her mother’s encouragement, she persisted. Then one day she got her break. Goodall observed a chimp using a piece of grass as a tool. He put it into a termite hill, pulled out the termites, and ate them. Although this might not be considered earth-shattering today, at that time humans were the only creatures thought to use tools. Her observation was the first recorded instance of such an event.

Her work led to future grants and studies that helped us learn about the complex social structure of the chimpanzees. She was able to learn about the social hierarchy of the males and females. She learned their language and how they communicate. Chimpanzees are intelligent animals with feelings and a tight knit family structure. We know this now because of the pioneering work she did and is still doing.

Jane Goodall in her own words says, “I went into the forest as a scientist and left an activist”. At age 83, she travels the world 365 days a year. She teaches conservation and encourages people to take action so that we might not lose the only home we all have, planet Earth. She fights on behalf of animal rights, and it is partly due to her diligence that chimpanzees are no longer used in animal experiments in the US.

Her approach is to educate and help find solutions. “There are many poor areas where people have nothing to eat”, says Goodall, so destroying the forest or poaching animals is their only option. Goodall goes in and helps them to develop other businesses while educating them about our environment and the harm they are doing. In this she helps to build a generation of conscious and self-sufficient people.

She spoke about the terrible and horrifying cycle of corporate farming and agriculture. The gases omitted by every aspect of this cycle are undeniably harming our planet.

In a time where corporate greed, lack of education, apathy and ignorance infest our world and compromise our future, she brings a voice of hope. She says nature can still win if we just give her a chance.  She is also the voice of empowerment.

She has a website called Roots and Shoots www.rootsandshoots.org where you can join others in taking action. There are many different ideas and groups that are forming via this site. They range from cleaning a local stream, planting trees, helping animal and wildlife and many more. You are encouraged to start your own mission by drawing on the help of the community.

She has an incredible master class that teaches people the reality about our environment and what we can do to change things. She also has a documentary just released about her life.

Jane Goodall has spent her life teaching others about our environment and educating people on the reality of how pollution and greed are destroying the Earth. She doesn’t do it for politics, for fame or money. She does it because she cares and believes profoundly in the strength of hope.