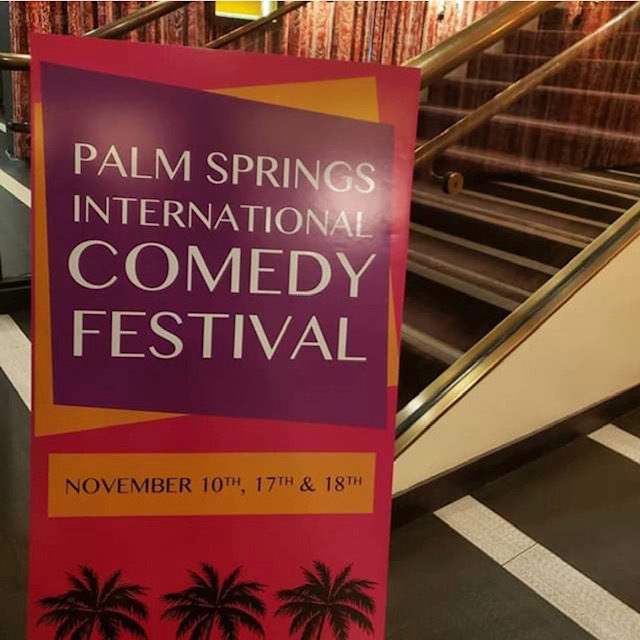 Palm Springs, CA (The Hollywood Times) 11/21/2018–Saturday, I headed downtown to Hotel Zuzo to take in another creative comedy extravaganza on just another beautiful afternoon in Paradise, day two of the Palm Springs International Comedy Festival.

Saturday and Sunday were both rich with comedy festival events including film screenings of shorts, TV pilots, music videos, sketch comedy and improvisation videos that have been submitted by contestants for review and festival screening events. At the close of the festival a panel of event judges will award prizes for the best Feature comedy screenplay and the best comedy script for a TV pilot. The prize for each is a distinguished listing in InkTip; a directory within which the winners can promote themselves and their scripts to the InkTip entertainment industry network which includes such members as CBS Films, HBO Films, Bad Robot, Paramount Pictures, FX, Zero Gravity, CBS, Hallmark and many more industry giants.

With so much comic talent participating in the festival there were Headliner performances both Saturday and Sunday, as well as Celebrity Q&A, film screenings on both days, and, (big inhale here) 50 comedians performing six hours each day of bumper to bumper standup COMEDY! And that’s where I was headed.

I’d worked at two comedy clubs while attending college in NYC, and later living in LA  friendship with the fantastically funny comedian Alonzo Bodden. Comedians have comedian friends. Who doesn’t like going to comedy shows? But it’s going for coffee, lunch, or to picnics, baseball games, that I learned from the standup comics that there is so much more to it than what we hear and see when the comic is on that stage.

Because I had worked at comedy clubs years before, and perhaps because later, I’d been a fly on the wall when with Bodden and His friends Tommy Davidson, Bob Kat G, and other really TRULY nice people… I’d been exposed to both the love of their craft, but also, I’d gotten a peek into how much has to come together in standup comedy to garner a successful professional career in comedy. It was a revelation to me, a member of the general world audience,  to realize that it is not REMOTELY as simple as, say, going from class clown to comedian. In fact the world’s most successful comedians are confirmed as being highly intelligent.

So to cover the standup competition as best and respectfully as a non-comedian can, I’ve taken into account what I learned as a fly on the wall from comedians like Bodden and Tommy Davidson who know this writer as Cheech, and here and there from others such as the shy Bobcat Goldthwait (who will never remember this writer, but who will always be remembered by me especially for his kind words when we were all out to lunch at Baja Fresh, after Moorepark, 2003 and Thanksgivings at Tonnja Berry’s debating who had right to the bathroom first… so this is not a review from a dilettante. It’s a synopsis instead from a dilettante that has enormous respect for the art of comedy, respect for those who pursue and persist and thus great appreciation for all who contributed to this art-form and with such, to the first annual Palm Springs Comedy Standup Comedian Competition.

I saw seventeen standup comedians in the competition and everyone who stepped onto the stage took an important step in being part of another Palm Springs first: The first PSICF hosted by the city that hosts The Palm Springs International Film Festival.

I arrived at Palm Spring’s luxury Hotel Zuso downtown, at 3pm on another perfect Saturday afternoon and had taken my seat for the Stand Up Comedy Competition as comedian

Brandon Montrel was being introduced. He bounded onto the stage and gave off an energy that says “I’m HERE!  I know you’ve been waiting for ME!” That energy told me he was going to be fun, if not funny. But Montrel is both fun and funny. He uses body language so overtly that if this guy had to do his act tied to the stool, he couldn’t. It wouldn’t have been the same. His material was good, his energy and connection with the audience was great, and his timing was slam-dunk. Montrel was a Lot of fun.

Dante Nero connected immediately with the audience. The first sentence out of his mouth ended with an instant thunder clap of laughter. Then he gave the audience time as he mused visibly, looking around, and then begins to chat with us.  Has great energy for someone sitting down on stage for his act. He’s a very big, tough looking tattooed guy who builds up to likable fast. He just talks, like he’s on the porch with you, with the audience, as he muses about things, like, oh… serial killers, race, race ambiguity, love, money, food and it’s funny every step of the way, but what is really brilliant is how he ties things together for punch lines as he moves further along. At one point it all led back to serial killers then discrimination against serial killers nowhere near what any reader or the audience would have guessed when he asked why Karl Eugene Watts had basis for declaring discrimination.. No more as it’s getting too close to being a spoiler. Dante Nero– start to finish was hilarious.

Another of note was Cari Kabinoff, who TOOK the stage and the audience’s attention somewhat like a drill sergeant would (in a funny way that worked). She, too uses a lot of body language and extremely animated expressions. But what was different about her was that she used the stage area a lot more than the standup comics I’ve seen, and the mic stand, and the stool. She’s up, she’s down, stretching, squatting, gesticulating, all in relevant motion the whole time Cari Kabinoff is telling her audience what they need to hear, firmly mostly, and all of it works together.

The only early issue, was that the sound was a bit too high, such that there was reverberation, and when the host, member of the PSICFA board of directors, the very funny Geoffrey Marks, was preparing to introduce the next comedian, a nice woman near me, in one of the rows close to the front asked about turning the mic down and the request was seconded politely by another, and with a few affirmative nods from audience, Geoffrey Marks made it so and the show went on.

It was a fantastic audience with the 7 panel of judges in the front.This venue was near full as it’ had been sold out for a full block of six hours, meaning attendees could come in throughout the day yet is seemed that nearly all the seats were full and they stayed that way for the near two hours this writer was in attendance. The crowd gave every comic attention and polite response until the comic got going, and for those who didn’t, it was a polite audience. There was no heckling, no rude booing. And that mattered, the audience always matters. There were comics that may have been new to stand up, as evidenced here and there by what were palpable jitters.  For those this audience was so great, the type comedians mean when they say “That was a great audience” or ‘You’ve been a great audience”! This was one of those crowds and good thing because there were a few who, with a little warm and a polite encouraging audience, jitters subsided and they came into their own and that paid off for the audience too.

A great example was Hannah Leskosky a ventriloquist, whose intro revealed she was nervous, but she was a good ventriloquist, but it was a very rocky start and it went downhill pretty fast in about a minute.  A minute on stage when there are five to fill is a long time. It was mostly because her timing between her dialogue, and her talking unicorn, was so oddly paced, that a lot of the jokes lines got tangled in and lost,.  She knew she was in a hole when she had the ventriloquism doll, an adorable stuffed, smart-alecky unicorn ‘say’ something like, “Put me back in my box, before they come after the unicorn because you’re tanking!” It was cute, and many in the audience replied saying, “no don’t go Marty!”

Her act began to go uphill so fast and she turned it around magnificently. It didn’t seem like it, but it’s possible that could have been part of the act. Either way, it worked, and her finish was amazing: It was a bit that lasted about a full min throughout which neither she nor the unicorn Marty spoke a single word for the comedy bit and it was hilarious and generated audience wide laughter the whole time. Won’t describe it as that would be a spoiler! Kudos to Hannah Leskosky too.

Gus Constantellis was hilarious about his upbringing in Brooklyn, about coming “out of the closet” to his brother, mom and dad; and the people in his Brooklyn neighborhood. But his bit about meeting a guy in an elevator for two floors was just, FABULOUS.  He goes through the journey of their relationship in his mind, for the audience, from start to finish in the space of time they were on the elevator together and it is memorably funny. He has a great presence, great energy, he’s cocky but self deprecating… likable and hilarious because of it and also I think, because everyone in that audience most likely related to a lot of the ridiculous things he was planning in his head about “the relationship” upon meeting his elevator love, and  I think comedians are most funny when their humor makes us laugh at ourselves, that’s cliché to say, but it’s cliché because it’s true. Gus Constantellis was brilliant in that regard.

The after parties are over and we have until next year to enjoy the next comedy festival in town.  But it’s not QUITE over, because all winners of the very first Palm Springs International Comedy Festival Competitions are still to be announced “in a few days”.

To keep posted on the winners to be announced go to:  www.facebook.com/PalmSpringsComedyFest