One of the Highwaymen, 84-year old country outlaw Willie Nelson performed Thursday night at the Shrine Auditorium in Los Angeles before a sold-out crowd of fans of all ages.

There was a line for Willie Nelson merchandise as you entered the Shrine Auditorium and what sort of fan would one be without purchasing a Willie Nelson T-Shirt. 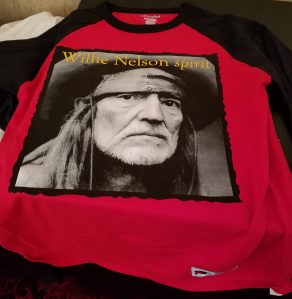 Willie, who back on April 29 celebrated his 84th birthday with a live performance on the Palomino Stage at the annual Stagecoach Country Music Festival in Indio, came out on to the stage first, followed by The Family Band and did not disappoint the sold-out crowd with “Whiskey River.”  The Los Angeles crowd filled with fans of all ages proudly, word-for-word, sang the lyrics and he seemed pleased by the sentiment.

Willie and The Family Band continued his concert with fan favorites, such as “Mamas Don’t Let Your Babies Grow Up to Be Cowboys,” “Angel Flying Too Close To The Ground,” “Crazy” and “On The Road Again.”

It seemed to appear grandparents were sitting with their grandkids as to experience this country legend together telling them about when they heard certain songs and what that song meant to them.  Now that is making music history and great memories.

Here is a video (posted by Rich Saputo) of fellow country star and Highwaymen, unannounced Kris Kristofferson, who joined Willie and opener Kacey Musgraves and her band for “Roll Me Up and Smoke Me When I Die,” “Will the Circle Be Broken?,” “I’ll Fly Away” and a cover of Hank Williams’ “I Saw the Light.”

“Don’t bury me, I’ve got a show to play,” Nelson sang. “And I woke up still not dead again today.” “Still Not Dead,” a song featured on Willie’s newest album “God’s Problem Child” out now.  Click here to watch the video, of “Still Not Dead,”  It’s great!

Willie paid homage to his fallen musical friends, including Waylon Jennings with a cover of “Good Hearted Woman” and Merle Haggard with “It’s All Going to Pot.” He also did his cover of Ed Bruce’s “Mamas Don’t Let Your Babies Grow Up to be Cowboys,” with the crowd on their feet and taking the lead on the chorus. He sang, in my opinion, a fan favorite of Brenda Lee’s “Always on My Mind” and then paid tribute to Hank Williams with “Jambalaya (On the Bayou)” and “Hey Good Lookin’.” He rocked through Billy Joe Shaver’s “I Been to Georgia on a Fast Train” and slowed it down for “Georgia on My Mind,” by Hoagy Carmichael.

Willie performed a solo of “Angel Flying too Close to the Ground” before getting the crowd up again with his boot stompin’ “On the Road Again.” He performed a melody of “Funny How Time Slips Away” with “Crazy” and “Night Life,” mixing blues, rock ‘n’ roll and his blend of traditional and outlaw country while just remaining impressive on his well-worn acoustic guitar, Trigger.

With a hearty “Goodbye,” Nelson ended his set with his cover of Tom T. Hall’s “Shoeshine Man.”

Kacey Musgraves, a 28-year-old Texas native, was a perfect show opener. “This is a classy place,” she said of her first time at the Shrine. “I’m surprised they let us in.”

She came out with “Stupid” and launched into her single “Biscuits.”  Next came a soaring ballad-style cover of Gnarls Barkley’s “Crazy” and her dancing in your seat  “Late to the Party.”  She told the crowd that she’s currently finishing up her third album and that she has “a lot of happy, good things in my life right now.”

She shared a few new songs including “Love Is a Wild Thing,” “Golden Hour” and “Butterflies,” all of which fit well within her set and included a more sarcastic song like “Family is Family.”

Everyone sang along to “Mama’s Broken Heart,” a song Musgraves (co-writers Brandy Clark and Shane McAnally) wrote that was recorded and made a hit by Miranda Lambert. She delighted the crowd with her heartbreaking rendition of “It Is What It Is” and her band exited the stage, leaving her alone to play acoustic guitar in the spotlight for her very first single, “Merry Go ‘Round.”  She talked about how much of a dream it was to be out on tour with Willie, even calling her idol “a little glowing, peaceful, weed-smoking Yoda.” What laughter she got!

The band returned and Musgraves noted that though we were all about to see an “American frickin’ icon” like Nelson, she paid tribute to an artist she admired for his guitar playing and songwriting skills. Her band started playing the late Glen Campbell’s “Rhinestone Cowboy,” which Musgraves absolutely nailed and should record a version!. She pointed the mic out to the audience and the crowd sang right in tune.

She closed her set with her be-yourself-single, “Follow Your Arrow.”

Willie is heading up north to play tonight in Murphys, CA and tomorrow at the Greek Theatre in Berkeley, CA, click here to get tickets:  http://willienelson.com/tour/

THE MAN IS ON FIRE!

Todd Haynes’ THE VELVET UNDERGROUND: A Radical Doc about a Radical Band

Stephan Moccio on The Weeknd, Miley Cyrus and Lionheart Album