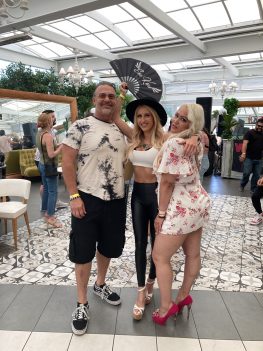 Los Angeles, CA (The Hollywood Times) 06/20/2021 – LA’s infamous day club returned to SLS Beverly Hills yesterday just four days after the city’s grand reopening. The sold-out event, hosted by Wicked Paradise and held at the hotel’s Paradise Terrace, featured a fully stocked cocktail bar, high-end bottle service, and a slew of locals DJs spinning tracks from all over the map. After nearly a year and a half cooped up indoors, it didn’t take long for guests to pack the dance floor for some much-needed release.

We caught up with Cameron Rosales, aka Rozegarden, one of the featured DJs, to get his take on the action. “Drake Atlee [Twinflame] and I were invited by Wicked Paradise after being noticed through streaming and social media activity during the pandemic. I thought the aesthetics were refreshing and a spot on example for the LA house music scene.”

Rosales was optimistic about the future of the music and club scene as the city reopens. “It was awesome to network and hang out with members of our music industry that were so deprived these last 18 months. I’m glad everyone is still on their two feet and knows how to socialize as well,” he laughed. As for Twinflame and I, we have the common goal of producing and DJing UK style, groovy and funky house music. The drums have to be flavorful, and the vocals have to be sexy. We want to bring the human aspect back to the house music and remind people of its soulful roots. Our goals and dreams go far beyond Southern California, and we hope to be playing in the UK and Europe in 2022.” We hope so too.

Meeting new people was certainly not a challenge.  It wasn’t hard to find a dance partner either.  The beach ball made an appearance around 4 pm.

With the city’s reopening and return to normalcy on the horizon, Wicked Paradise will be hosting more LA events in the days to come. For upcoming schedules and tickets, check out their website and follow @wckedparadise on Instagram.

Check out Wicked Paradise next event on June 26th.  Only a few tickets left 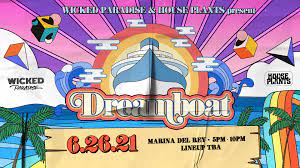