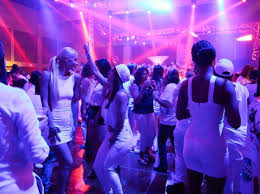 Palm Springs, CA (The Hollywood Times) 9/23/22 – Whoever said lesbians don’t spend money has never been to the Dinah.  The signs of capitalism were everywhere from the bars with the Tito banner, to the tacky Budweiser flags, and the beach balls with the vodka label imprinted on them.  There were long lines with customers willing to wait in the oppressive heat for an early buzz. 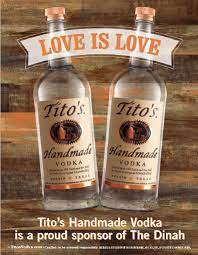 The Tito’s flag had the slogan, “Love is Love” capturing the mood of the day.  Corporate America has gobbled up the political messages of the LGBTQ community.  A VIP pass is an additional $300.00.  It gives one access to their own VIP bar.  I met a veteran next to the gate that divided us at the VIP bar.   “For me I spent many years in the military serving others.  I worked hard to get to this point in life so I could spoil myself.  I’m not in a relationship.  Whose gonna fucking spoil me. “I am,” said the military veteran.   Her motto reminded me of the Kendrick Lamar song with the refrain, “I Love Myself.”

Later in the day I met two other young military women proudly serving their country.  The military they said has come a long way since the days of “don’t ask don’t tell.”  One of them even shared that she had a ménage a trois the prior evening demonstrating sex positivity all the way. The other young woman described herself as a “gold star lesbian” and explained the term meant a lesbian who has never had sex with a man.  They had both learned about Dinah from the L Word and the dating app, Hinge.

The twenty somethings were highly visible at the event grinding, twerking, and making out on the dance floor.  The lesbian death bed seems to be a myth rather than reality at what festival goers call The Dinah.