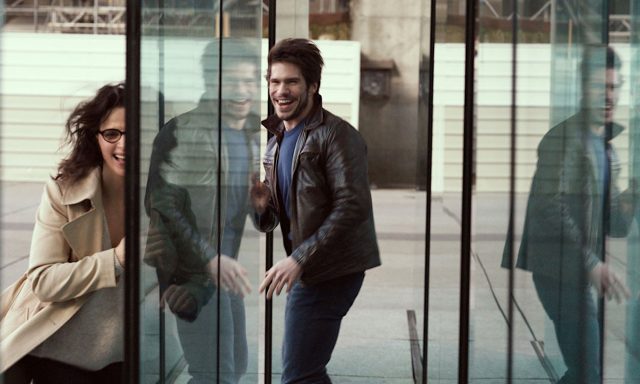 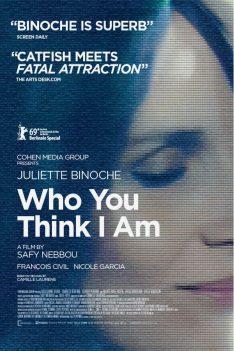 Los Angeles, CA (The Hollywood Times) 9/4/21 – Screening at several Laemelle Theatres in Los Angeles and streaming on Netflix and Amazon Prime Video is Safy Nebbou’s Who You Think I Am (Celle que vous creyez, France, 2019), a romantic cyber-drama and psychological thriller starring Juliette Binoche as a middle-aged French literature professor and single mom, who creates a fake Facebook profile to do a little undetected online snooping. Juliette Binoche as Claire Millaud has just been “ghosted” by her twenty-something lover Ludo (Guillaume Gouix). This happens just after her husband Gilles (Charles Berling) left her for a young woman. To get back at Ludo, she poses online as Clara, a 20-something fashion intern. She does this to befriend Ludo’s handsome pal Alex (François Civil). Alex falls for Clara, and Claire is invigorated by their lengthy chats. Superficial correspondence quickly escalates towards intense intimacy and uncontrollable obsession and even phone sex. But Who You Think I Am is not just a tale about “catfishing” and it calls on us to ask deeper questions about ourselves in this brave, new world of online social connectivity and our online selves. Pitched somewhere between the icy satire of late-period Claude Chabrol and the guilty thrills of Guillaume Canet’s Tell No One, Safy Nebbou’s mysterious tale of love and obsession will strike a chord with anyone who has worried about the random interactions of the internet while remaining inexorably drawn to the seductive glow of their iPhone. 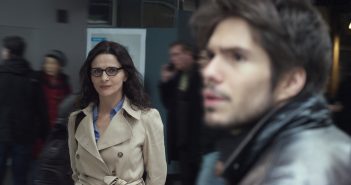 Writer-director Safy Nebbou along with co-writer Julie Peyr, have adapted a bestselling novel by Camille Laurens, in which the film like the novel seeks to explain why Claire behaves this way. She recounts the relationship to a new therapist, Dr. Catherine Bormans (Nicole Garcia), but only reveals aspects of her story to the psychologist. Claire proves to be an unreliable narrator. What makes the film so engaging is how she dispenses different bits of information to Dr. Bormans as the story unfolds. As Binoche explains in an interview: “In the film, the way it is told, is a middle-aged woman who is feeling abandoned by her husband who has a relationship with a younger woman, so she consequently decides to go with a younger man [Ludo] and feels mistreated  – not loved; it’s not a satisfying relationship. Until she creates this avatar [Clara] and that amuses her, and she plays with it and starts believing in it. What touched me in the film is that she realizes with her therapist, that she cannot accept being abandoned. It’s difficult for her, especially since she’s given so much of her life to her ex.” 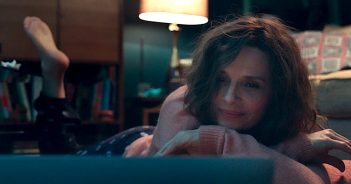 Binoche plays two characters, Claire and Clara, in different time frames, past and present, and the actress delivers a rich, multi-layered performance. “Who You Think I Am” offers both the pleasures of Binoche being a “cougar” while also playing a woman of a certain age processing her anger at men who don’t see value in older women. In the words of Juliette Binoche: “A lot of women are in that position of being dumped because men are freaking out as they are approaching death, or unable to make love. They reinvent their life to continue this illusion. Facing this feeling of abandonment, she says, ‘I’m OK to die, but not be abandoned, because that’s unbearable.’ It was interesting to go into this question about abandonment that we all have to face one day.” 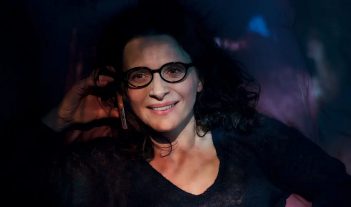 What makes the film so great are moments such as when Binoche watches Alex at various rendezvous points while he looks right past her. Her gaze is captivating – sizing up the man Claire loves in non-physical ways. To surprise her therapist, Claire actually writes a narrative of her own about the possible relationship with Alex and how it might end in tragedy – a very literary kind of self-explanation as wish fulfillment. What makes the film increasingly complex and interesting in the second half are the competing narratives that emerge, as Claire reveals things she has hidden from her therapist and also how the narratives of other characters run counter to hers. Again, Binoche clarifies what Claire is experiencing: “She’s trying to survive. It’s not easy for her to go with a younger man. She’s playing when she creates this avatar/Facebook identity, but it is a reaction, rather than a liberating choice. Her belief system is different. She takes off with this idea of this relationship. People [chatting] online can feel high having those kinds of exchanges. But there is no reality because it goes through a medium that is not real.” 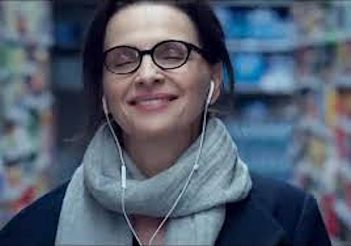 Because Claire is a literature professor, we see her lecturing several times to university students. One of the lectures is about the French literary classic Les Liaisons dangereuses by Pierre Choderlos de Laclos – which plays out similar themes in a late 18th century world of letter-writing and deceptive love affairs akin to what Facebook, Instagram, and mobile phone texting make possible today. As Claire Milllaud puts it: “I do use social media. For people like me, it’s both a shipwreck and a life raft.” Who You Think I Am is a film that forces us to ask deep questions about ourselves and our sense of truth and our ability to deceive ourselves as to who we think we are. According to Binoche, “This film is a tragedy. How tragic is it to be dumped by a partner you have been living with for 20 years? All of a sudden you are alone! It’s a Greek tragedy!” Juliette Binoche gives the character of Claire the depth the role required. It speaks of what many of us most fear – abandonment by those we have loved. “We all want to distance ourselves from the prospect of our death.” 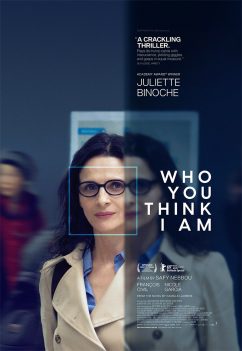 The film previously screened at the Berlin International Film Festival in 2020 but its release was postponed due to the COVID pandemic. Director Safy Nebbou has made other films including Bad Seeds (2012) and In the Forests of Siberia (2016).