New Year’s Eve 2022 starts with a bang at the Canyon Club in Agoura Hills as Which One’s Pink? – the Best Pink Floyd Cover Band in the World – performs live.

Los Angeles, CA (The Hollywood Times) 12/19/2021 – The Canyon Club at Agoura Hills offers an incredible night of music and dancing on New Year’s Eve with the greatest Pink Floyd cover band in the world, Which One’s Pink. And that is not hyperbole since the band recently was voted Best Tribute Band in All Access Magazine’s First Annual Music Awards. Luckily, tickets are still available for this fantastic show.

Given the history of the Canyon Club at Agoura Hills throwing exciting events, the night will not end when the band leaves the stage. Indeed, a deejay will take over, and there will be dancing all night long to ring in the new year. Certainly, the Canyon Club is known for breaking down tables and chairs like lightning to create a dance floor that shakes and gyrates with the history of this classic venue.

However, before the dancing begins, Which One’s Pink? will allow the audience to journey back into the golden age of rock and roll when Pink Floyd released the greatest albums of a classic era. Most people don’t know that the band’s name came about by combining the name of two favorite, blues musicians Pink Anderson and Floyd Council.

However, the name of the cover band comes from a famous line from a song called Have a Cigar. On the Wish You Were album, the lyrics of Have A Cigar are a sarcastic take on the greed of the insiders and bigwigs in the music industry. These money-grubbing executives claim to love the band when they don’t even really know who they are in reality. 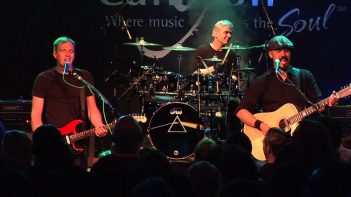 Well, I’ve always had a deep respect
And I mean that most sincere
The band is just fantastic
That is really what I think
Oh, by the way, which one’s pink?

The depth and quality of Which One’s Pink? is reflected in their adoption of this name for the cover band. Although they are thriving off the music of Pink Floyd, they also celebrate the music and keep a legendary tradition alive. Indeed, the energy and flow of the band are undeniable. Both male and female vocalists cover every aspect of Pink Floyd’s lyrical offerings with precision and intensity.

There are no arguments to be made. Seeing Which One’s Pink live is a perfect choice for a memorable New Year’s Eve 2022 at the Canyon Club in Agoura Hills. I will be there watching the 2021 wall come down and waiting for a better year to come in 2022. At the same time, I also will be on the dance floor with my lady, celebrating the night.