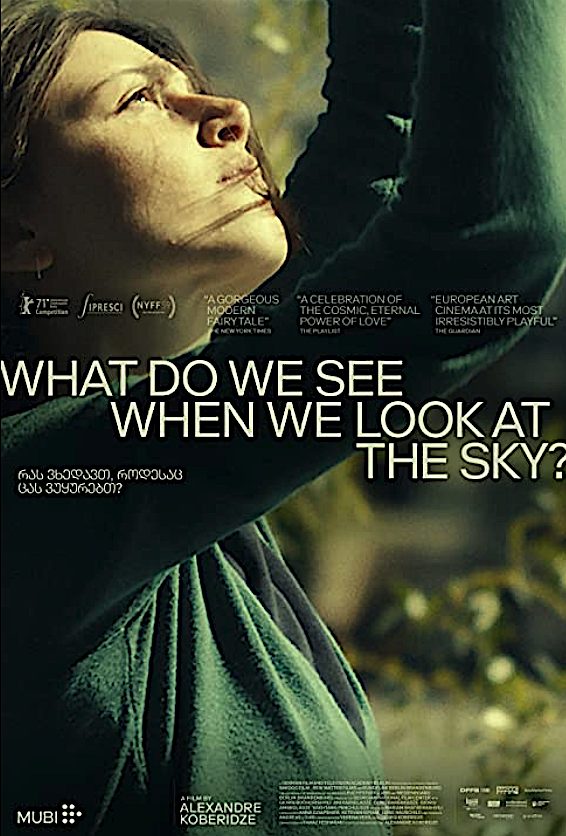 Los Angeles, CA (The Hollywood Times) 11/16/21 – One of the delights of the AFI Film Festival in Hollywood was a screening of a lyrical film from the Republic of Georgia – Alexander Koberidze’s What Do We See When We Look at the Sky? What is a movie and what constitutes the subject matter of film? This 2021 German-Georgian film does not seek an objective answer to such questions, but rather an emotional one that requires that the viewer surrender to the slow beauty of what we see on the screen. This movie means to make us notice the marvelous in the everyday. During almost every one of its meandering 150 minutes, Koberidze teaches us how to watch his sun-kissed tone poem about how the real magic of our world is almost always invisible. This is Koberidze’s second film and it won the FIPRESCI Prize at the 2021 Berlin Film Festival and has garnered many other awards at international film festivals for its screenplay and cinematography.

Set and shot in Kutaisi, one of Georgia’s oldest cities, What Do We See, written and directed by Aleksandre Koberidze, opens on a scene of kids getting out of school. Sometimes they are by themselves, sometimes greeted by an adult; there are a lot of puffy jackets, scooters, and stray dogs all about. We then see two pairs of shoes walking toward, away from, and back toward each other, as if attracted by magnetism. These are our heroes: A soccer player named Giorgi (Giorgi Ambroladze) and a knowledgeable young pharmacist named Lisa (Ani Karseladze) have just met on the banks of the Rioni River in Kutaisi.

We have only seen them interact from the knees down or through nighttime long shots lensed from so far away that these characters have been reduced to specks of light in the darkness, but the film’s affectless narrator (voiced by Koberidze himself) assures us of their shared affections. Alas, they are both about to be cursed as well, if only because true love should never be so easy to find. The two meet again, accidentally, after dark, and trusting in the beneficence of fate, they make a real date for the next night.

But fate has other plans. A group of road-intersection objects – specifically, a seedling planted on a traffic island, a security camera, and a drainage pipe – inform Lisa that her plans will not unfold as she believes they will. Overnight, she will be transformed physically. So will Giorgi. They will not recognize each other and will not meet. The wind tries to intervene with some crucial info but is blocked. The loud motor of a passing car prevents her from hearing the most important detail: The same evil eye has cast its gaze on Giorgi as well, meaning that he too will transform into someone else. How will these sweet young people recognize each other at the date they’ve scheduled for the next evening? How will they ever know if they’re sitting across from their greatest potential happiness, or brushing past it as they walk across one of the wood-planked bridges that connect the city together? What an awful fate this is – the kind that unveils waking life to be a witless fairy tale.

This may sound like a fable or a parable, but it is really a special kind of lyrical romance between two persons who meet each other by chance and eventually find each other again when fate allows. Giorgi and Lisa are played by different actors when they wake up the next morning (Giorgi Bochorishvili and Oliko Barbakadze, respectively), but the swap itself is less important than how What Do We See When We Look at the Sky? prepares us for it. As the old Lisa lies in bed, Koberidze’s voice instructs us to close our eyes until we hear the signal to open them –there’s even a little countdown on screen.

It doesn’t matter: Nothing materially changes during the shot. Lisa doesn’t move. There is no sudden flurry of CG or any sort of lo-fi for this body swap. All the same, these 10 or 15 seconds are suddenly charged with a uniquely cinematic potentiality that’s easy to feel but impossible to see – and we have to accept it in order to enter the cinematic space of the next two hours of the film, following along like the river that flows through the city of Kutaisi. Despite their initial love at first sight, Georgi and Lisa don’t recognize each other. Shouldn’t true love transcend appearances, though? If they’re really soulmates, right? Or has the curse changed their souls, as well? Koberidze, who also narrates the movie, admits at the end that he has no answers.

We never lose sight of Lisa and Giorgi. Both are forced out of their specialized jobs because of the curse, and find low-paying gigs near each other at the center of town), but it almost completely eschews the typical ups and downs associated with their wacky rom-com predicament. Instead, Koberidze uses their situation as a lens through which to look at all of Kutaisi, from its local pranksters to its soccer-obsessed local kids and even the area’s overlooked stray dogs – they also have their favorite teams to watch on television. One minute we focus on the hapless owner of the sports bar where Lisa is hired to run the ice cream machine. The owner buys a projector to screen the World Cup, but can’t figure out how to position it away from the glare of the sun. Then next, we watch a misplayed ball float down the river as Koberidze’s narration reflects on the peripheral horrors of the modern world, and the supposed irresponsibility of making such effervescent art during this age of tragedies.

What Do We See When We Look at the Sky follows the hidden rhythms of time and the city and the sounds to which it listens so carefully. People walk this way and that. Faraz Fesharaki’s velvety soft 16mm cinematography zooms in on whatever strikes its fancy, the film itself becoming as watchful and reactive as its audience while rays of the afternoon sun trace small universes between the trees. Documentary filmmakers (played by the director’s own parents) pop in and out as they search for 50 different couples to interview for their movie about modern love, even if they only plan to use six of them.

At one point, an over-eager casting assistant makes strangers pretend to be coupled in order to hit her casting quota, unaware that consecrating a fake romance on camera might be enough to make it real. Over time, we realize that Koberidze’s discursive tone poem orbits around Giorgi and Lisa only because their fable-Esque missed connection so perfectly embodies the kind of wonder that we see around us every day, but spend our whole lives searching for all the same. As Koberidze says about a certain soccer match related in the movie, “everything happened the way it had to happen.”