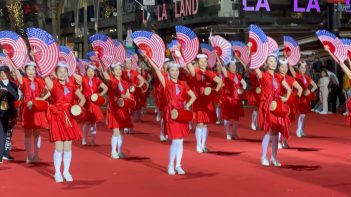 Hollywood, CA (The Hollywood Times) 11/28/22 – It is the best of times! It is the 90th anniversary of the parade and it was in full swing on Hollywood Boulevard and Sunset Boulevard as hundreds of floats careened down the Tinseltown streets filled with smiling participants and gleeful on-lookers.

This year’s stars included CW artists and many radio and television personalities who put on their best Sunday best and big smiles.

Advertisement
This year the Grand Marshal with Danny Trejo a man who’s filled with the most magnificently happy personality I’ve come across in a long time filled with a special kind of gratefulness and understanding. Montel Williams, whom I asked about his Christmas wish.
TV Stars from daytime and movies rounded out the evening’s entertainment. 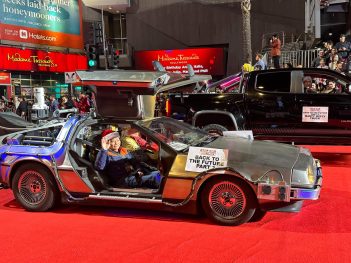 I love the Christmas parade and have attended it since I was a child. I was hoping the Young generation would get a foothold on this parade and Danny Trejo’s son Gilbert was just the ticket handsome young pink-haired bringing the youth quotient to an angel tradition in Hollywood he helped wrangle his dad to get him into the waiting Rolls-Royce that he was going to ride in down the parade route. It turned out Gilbert Trejo just made alphabet land for the band X and is a well-known director in the LA scene keep your eye out for him. Eric Roberts was a hoot, he was in good spirits and he shared a couple of laughs with The Hollywood Times reporter Tequila Mockingbird. 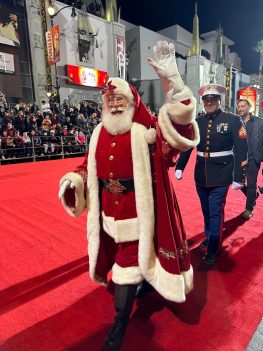 Everybody knows the real true star of the Hollywood Christmas Parade is our fearless leader, Santa Claus himself!
It was a special day filled with special people doing a special event together honoring the history of Hollywood and our minds were filled with happy ghosts happy thoughts and happy times.
Viva Hollywood, Viva The Hollywood Times.