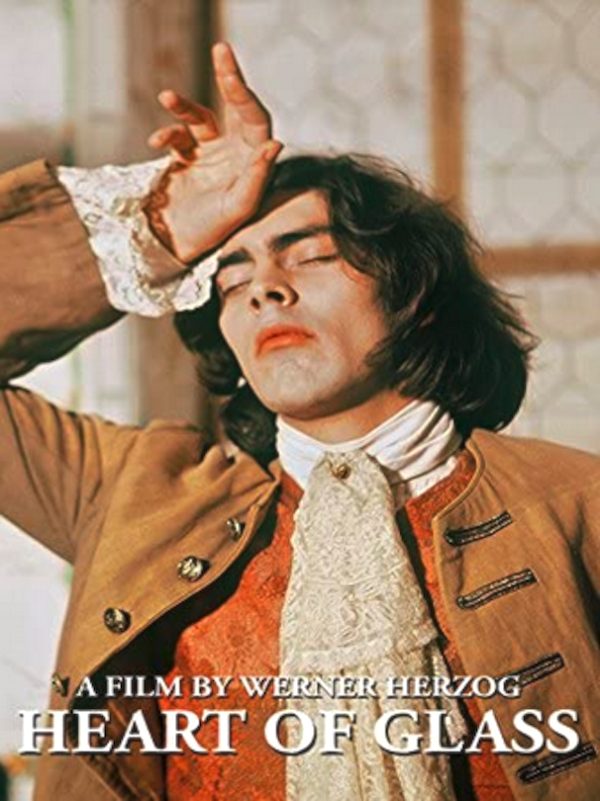 Beginning this Friday, June 24, at the Los Feliz Theatre in Los Angeles, the American Cinematheque is hosting a retrospective of the films of Werner Herzog, the German polymath filmmaker who has directed 74 films.

Opening the series on Friday night will be Herzog’s Heart of Glass (1976), a very German fable about a ruby glass factory in a Bavarian village around 1800 that presents a vision of man’s future as desolation. Herzog has just finished writing a novel The Twilight World (Penguin Random House, 2022) which mythologizes the real-life story of Hiroo Onoda, the Japanese holdout who defended a small island for twenty-nine years after the end of World War II. This is not the only book ever written by Herzog, but it serves as an occasion for the 79-year-old pioneer of the New German Cinema to sign copies of his book at Chatterton’s Bookstore in Los Feliz and talk to his fans and many former students. Werner Herzog, along with Rainer Werner Fassbinder and Wim Wenders, were true pioneers of New German Cinema in what was then West Germany in the late 1960s. Herzog is famous for his films that often feature ambitious protagonists with impossible dreams, people with unique talents in obscure fields, or individuals in conflict with nature.

Werner Herzog never formally studied film-making but rather history, literature, and theatre. His earliest films were documentaries like Even Dwarfs Started Small, Fata Morgana, and Land of Silence and Darkness. Then in 1972, Herzog burst on the international film scene with his monumental Aguirre, the Wrath of God, shot in the Peruvian Amazon with Klaus Kinski as the ruthless and insane Don Lope de Aguirre leading a Spanish expedition in search of El Dorado. Five weeks of location shooting in Peru effectively meant the film crew endured the same hardships as the characters: heat, hunger and the unpredictable behavior of Kinski, scarcely any less a madman than the treasure-seeking Aguirre. The director claims that Kinski only calmed down enough to finish the film after Herzog threatened to shoot the star and then himself.

What’s truly amazing is that Herzog’s 1982 movie Fitzcarraldo shares some of Aguirre’s locations, thereby making the director the only man on earth crazy enough to sail down a tributary of the Amazon with Klaus Kinski and then go back ten years later to do it all again. The second venture in the Amazon involved a gigantic steamboat that has to be pulled over a mountain for the sake of the plot, which involves an eccentric Irishman building an opera house in the jungle.

Returning to Germany and German fables, Herzog next chose to tell the story of a real madman in The Enigma of Kaspar Hauser (1974), who suddenly appeared in Nuremberg in 1828, barely able to talk or walk, and bearing a strange note. The next foray into German lore was Heart of Glass (Herz aus Glas, 1976), based on a screenplay by Herbert Achternbusch. Heart of Glass is a fitting choice to introduce the Herzog retrospective of the American Cinematheque, as it is one of the least seen and most famous of Herzog’s films. It is known as the one where most of the actors were hypnotized in most of the scenes. It hasn’t been much seen, perhaps because it isn’t to the taste of most people, seeming too slow, dark and despairing. There’s no proper story, no conclusion, and the final scene is a parable seemingly not connected to anything that has gone before.

Werner Herzog’s Heart of Glass (1976) is a vision of man’s future as desolation. In a film set entirely in a Bavarian village around 1800, it foresees the wars and calamities of the next two centuries and extends on into the 21st with humanity’s nightfall. In the story of the failure of a small glass blowing factory, it sees the rise and collapse of the industrial revolution, the despair of communities depending on manufacture, the aimlessness of men and women without a sense of purpose.

None of these things is specifically stated. They come in the form of prophecies by a shepherd, who pronounces them in a trance to townspeople who think he must be mad. His words don’t specify any of the events we know to have taken place, but they’re uncanny in their ability to evoke what was coming. His words are the way a man might describe nuclear destruction, tyranny, ecological disaster and the dominance of the crowd over the individual – if that man lacked words for the fearful images that appeared to him.

Herzog’s canvas has two shots from the tops of peaks, looking down over the earth. For the rest, he sets his film entirely within the village, in a few houses, a beer hall, a glass factory, and in the surrounding forest. The people depend for their existence on the manufacture of beautiful and valued rose-colored glassware. The master glassmaker Muhlbeck has died, taking to the grave the secret of the ruby glass. Desperate experiments are undertaken to rediscover the recipe, but all fail. A reasonable person might say, “All right then, the factory can make other kinds of glass.” There are no reasonable people in the village.

Herzog indeed hypnotized them for most of the scenes; that is not simply publicity. The dialogue which they repeat under hypnosis is pronounced with a dread certainty. It lacks life and individuality. Is this how hypnotized people speak? Not necessarily. Usually they speak more like – themselves. It seems that what we may actually be hearing are the intonations of Herzog’s own stage voice as he hypnotized them and told them what to say. He is acting through them.

The film is a visualization of a prophet’s apocalypse. Hias (Joseph Bierbichler) is the prophetic shepherd whose prophetic utterances shape the tale: “Before the day is over, the end will come.” The lost art of “ruby glass,” gone with the death of the foreman, leaving the townspeople bereft. The industrialist’s son (Stefan Güttler) is a drowsy, dandified vampire suffering from Rimbaud’s vertigos, “the chaos of the stars makes my head ache.” He locates the elusive dye in the blood of his servant girl, and ponders the age’s dilemma: “What are factories still good for?” Meanwhile, the divination of the cowherd (Josef Bierbichler) proceeds beyond rural crisis and toward the next century’s Reich and, finally, into a timeless fable.

Certain villagers stand out from the small population. Huttenbesitzer, the heir to the glass factory with his velvet overcoat and laced shirt is Stefan Güttler. His senile father Adalbert who never leaves his chair is Clement Scheitz. The dwarfish sycophant is Volker Prechtel. Sonja Skiba is the brazen woman Ludmilla with the shaved head. Two friends, who quarrel and fall drunk from a hayloft, one living, one dying because his body cushions the other’s fall. The survivor dances inconsolably with his friend’s body. His macabre dance, and many other scenes, take place within a beer hall where the people drink and stare. In a well-known scene, one of the friends breaks a beer stain over the head of the other, who doesn’t react. Then, slowly, he pours his own beer over the first one’s head, again getting no reaction.

The interiors are darkly lit, with shadows gathered around them. The music of Popul Vul in the soundtrack seems like melodies from Purgatory. Ordinary conversation is lacking, ordinary routines abandoned. These are people solemnly waiting for something to happen, but are reduced to automatons of hopelessness and hostility.

Herzog grew in West Germany in the 1950s when the spectre of Nazism has been defeated and the hypnotic sway of Nazi power vanquished and the German population seemed numbed by what had transpired in the previous decades. Herzog felt that it was quite appropriate to show the group of Bavarian villagers caught in a collective trance.  They are meant to be, “like sleepwalkers walking into an unforeseen disaster”. This story idea intrigued him, but he realized the only way to effectively make the film would be to put the actors under hypnosis and that is what he did.

Two scenes with mountain peaks open and close the film. The first shows a man looking down into a vast valley, through which a river of clouds pours. In 1976 these clouds were not created by CGI; Herzog used special effects to combine the man and the image. Herzog worked 12 days to get the shot. The effect is haunting. What it evokes for me is the sense of Man standing above Time and glimpsing it on its flow toward Eternity. Herzog was trying to recreate the famous painting by early 19th century German painter Caspar David Friedrich of “Wanderer Over a Sea of Fog.”

The final scene involves a man on a mountain peak who looks out to sea. Herzog intercuts sea birds on the mountain side, moving in nervous waves of flight. A narrator explains that the man concludes there must be something on the other side of the ocean. Transfixed by his conviction, men set out to cross the sea, rowing with fierce determination in a pitifully small boat after land disappears behind them and no land appears before them. The narrator tells us they took it as a good omen that the birds followed them out to sea. It is better to row into oblivion than to wait for it to come to you.

Herzog’s Heart of Glass screens on Friday, June 24, at 7:00 pm, followed by Nosferatu the Vampyre (1979) at 10:00 pm – both at the Los Feliz Theatre. On Saturday, June 25, will screen Herzog’s 3D Cave of Forgotten Dreams (2010), and later that same day Aguirre, the Wrath of God (1972) and Fitzcarraldo (1982) – both at the Aero Theatre in Santa Monica. On Sunday, June 26, 4:00 pm, there will be double-bill of restored prints of Herzog’s Fata Morgana (1971) and Lessons of Darkness (1992), followed by The Enigma of Kaspar Hauser (1974) at 7:00 pm – at the Los Feliz Theatre in Los Angeles. As a chaser, Herzog’s later film Bad Lieutenant: Ports of Call New Orleans (2009) will screen at the Los Feliz Theatre at 10:00 pm.  The retrospective continues the following weekend in this 20-film Herzog Retrospective hosted by the American Cinematheque at the Los Feliz and Aero Theatres.