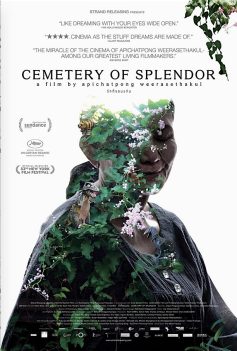 Los Angeles, CA (The Hollywood Times) 4/27/22 – As part of a retrospective of the films of Thai auteur Apichatpong Weerasethakul, the American Cinematheque just screened his 2015 film Cemetery of Splendour at the Los Feliz Theatre in Los Angeles. This is a Thai dramatic art film with a plot that revolves around a spreading epidemic of sleeping sickness where spirits appear to be stricken and hallucination becomes indistinguishable from reality. The epidemic is used as a metaphor for personal and Thai societal issues. The film premiered at the Cannes Film Festival in 2015 to critical acclaim. Cemetery of Splendour is probably the closest Weerasethakul ever came to a state-of-the-nation report on Thailand.

Cemetery of Splendour starts in what feels like a realist mode – its reality centering on an apparently incurable sleeping sickness – and escalates at the midpoint into a kind of phantasmagoria, signaled by cyclical changes in the color of lights. This shift from the broadly realistic into the overtly fantastical has obvious roots in the two-part structures of Weerasethakul’s early films, from Mysterious Object at Noon (2000) to Syndromes and A Century (2006), but this time one part of the film does NOT comment on or revise the other. Here the shift serves to intensify the current nightmare which has been there from the start. You could think of it as a horror film akin to Kubrick’s The Shining.

It’s not accidental that the shift occurs during a visit to a cinema. Jen (Jenjira Ponpas Widner, a central, poignantly disabled figure in Weerasethakkul’s films and video installations for the past decade) came to the north-eastern town of Khon Kaen to visit her friend Tet (Petcharat Chaiburi), a nurse at a temporary military hospital in Thailand’s eastern Isan province near the border with Laos. Here Jen finds her friend Tet tending to wards of serving soldiers who had succumbed to an epidemic of narcolepsy. Jen decides to stay on as a volunteer to help one patient who was never visited by relatives, a soldier named Itt (Banlop Lomnoi, the soldier who was the major character in his 2004 film Tropical Malady). Seemingly as a direct result of her care, Itt periodically revived and was able to have conversations and meals with her before relapsing.

Jen has a special connection to this military hospital for sick soldiers – it is housed in buildings of the old school which she and nurse Tet once attended as children. Hospital life unfolds at a leisurely pace: Bodies are washed, anti-snoring machines from America are installed, and seminars on meditation are given. Outside in what was the children’s playground and soccer field, a digger excavator is noisily tearing up the earth to put in a tower for internet services. In this school-turned-hospital, Jen befriends young female medium Keng (Jarinpattra Rueangram) who uses her psychic powers to help loved ones communicate with the comatose men. Doctors explore ways, including colored light therapy, to ease the men’s troubled dreams. Jen discovers Itt’s cryptic notebook of strange writings and blueprint sketches. There may be a connection between the soldiers’ enigmatic syndrome and the mythic ancient site of ancient Khmer kings that lies beneath the clinic. Magic, healing, romance and dreams are all part of Jen’s tender path to a deeper awareness of herself and the world around her.

Once this has happened a few times, Jen ambitiously invites Itt to leave the hospital with her for a meal in the night market and a visit to the movies. They sit in a not very crowded multiplex cinema watching the trailer for a typically lurid Thai horror film (Phyungvet Phyakul’s The Iron Coffin Killer) and then stand for the expected national anthem. (A short montage of the currently reigning King Bhumipol’s good works is always played in Thai cinemas before the main feature, accompanied by the national anthem; patrons are mandated to stand.)

On this occasion, though, the cinemagoers stand in darkness and silence. Weerasethakul cuts to a long-held shot of two ceiling fans as the light playing on them goes through a cycle of color changes. We next see Itt, who has relapsed again, being carried down the escalators of the glitzy shopping mall beneath the cinema – and very slowly mix to a night shot of the hospital ward he came from. We’ve already seen light-tubes installed beside each bed, bathing the narcoleptic soldiers in azure light, an experimental psycho-therapeutic remedy for their condition. These light-tubes now also start displaying a color-cycle: azure, pink, peppermint green, blood red. The color-cycles dominate the entire second part of the film.

Jen’s experiences give the film its overall arc. The story opens with her arrival in Khon Kaen and her exploration of the makeshift hospital as she searches for the friend, nurse Tet, who has brought her to the town. The first thing established as they talk is that Tet’s earlier prescription of a medicinal cream for Jen’s damaged leg hasn’t helped: it had superficial effects but “didn’t reach the bones.” Jen’s damaged body is a theme of its own in the film and, in a sense, she represents Thai society in general.

Jen goes on to have interesting and illuminating conversations with various people, living and dead. The psychic Keng who recalls her past life as a boy who died falling from a tree, the librarian who is a holdover from the building’s past life as a school. Later, after visiting a local shrine with her American husband Mr. Widner and leaving three ceramic animal figures on the altar, Jen actually runs into two Laotian princess-goddesses in a park. They explain that they are dead but used to be princesses in this ancient Khmer royal city which is under the park and the nearby school being used as a military hospital.

The key event during her stay is her “adoption” of the narcoleptic soldier Itt. During his limited periods of wakefulness, Itt becomes her surrogate son. Their conversations are exactly what you’d expect from new acquaintances: Where are you from? How’s your competence in other Thai dialects? What are your hopes and dreams? Itt explains that he wants to quit the army (he’s done little more than wash his general’s car) to run a street-food stall; Jen’s profound despair springs from learning that Itt will never recover. She ends the film fully awake and wide-eyed, aghast at her realization that things will never get better.

In many subtle ways, Cemetery of Splendour is an allegorical film. In the 2010s, Thailand was and still is a constitutional monarchy, but the aged, much-loved and infirm King Bhumipol Adulyadej (reigned 1946 – 2016) wielded little power, as Thailand has been ruled by a military junta from May 2014 until July 2019. Certain human rights were curtailed and opposition was officially silenced: Weerasethakul quietly alludes to the death of a real-life political prisoner in one of the entries in Itt’s journal) and there are still outbreaks of shocking, murderous violence. The only direct references to military dictatorship in the film are the occasional glimpses of murals and statues of Sarit Thanarat, an army field marshal who staged a coup in 1957 and ruled with still-hated malignance. Weerasethakul says he was startled to find them in situ in Khon Kaen, where Sarit – like the civilian Thaksin more recently – lavished money on the rural constituency to bolster his support. It is this Sala Keoku Park located along the Mekong River outside of Nong Khai, which is very close to the capital city of Vientiane in nearby Laos.

While picnicking in this park on the shore of the Mekong River, Jen and Itt are joined by the psychic Keng. As Itt doses off, Keng is able to channel the mind of Itt and, in her own voice, speaks for Itt. She leads Jen on a tour of the grounds of the park, half-ruined by a recent flood, and explains that this is the location of the former royal palace of the Khmer kings. Keng-as-Itt sees the rooms of a gorgeous palace and magnificent vistas of orchards, rice paddies, and unspoiled land. Jen doesn’t seem to take this in but sees what’s actually there: Dumped garbage and debris, moralistic quips painted on signboards, sculptures of couples – corporeal and skeletal – created by the mystical Laotian artist Bunleua Sulilat for his Sala Keoku Park.

This is perhaps the most uncanny and haunting part of Cemetery of Splendour, as we too as spectators are caught up in both visions as true. There are ancient forces and battles underpinning the actions of many Thai authority-figures, and contemporary Thailand is a wasteland of consumer detritus, didactic commands and surreal incongruities. It’s in this sense that the film is an op-ed commentary on 21st-century Thailand. Cemetery of Splendour rests on Weerasethakul’s familiar metaphor of sickness and the drive to heal it, from treatments for Jen’s damaged leg to the narcoleptic soldiers, echoed in images of a dying tree orchid and rather half-hearted mass aerobics. For Weerasethakul, though, what Buddhists see as spiritual sicknesses – the mental impediments to achieving nirvana – are always more important than purely physical maladies, tropical or otherwise.