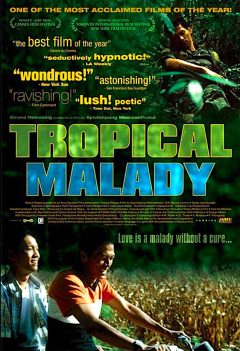 Los Angeles, CA (The Hollywood Times) 4/30/22 – On Thursday April 28 at the Los Feliz Theatre in Los Angeles, the American Cinematheque screened Tropical Malady (Thailand, 2004), the romantic psychological art film written and directed by Apichatpong Weerasethakul. Like his earlier film Blissfully Yours (2002), Tropical Malady leaves the quotidian world behind midway through and plunges into a pure fable. The film has a bifurcated structure; it is separated into two segments – the first is a romance between two men, and the second a mysterious tale about a soldier lost in the woods, bedeviled by the spirit of a tiger shaman. At the time of its release in 2004, industry journals such as Variety and The Hollywood Reporter wrote disparaging reviews about the time. However Tropical Malady went on to win the Jury Prize at Cannes and was much praised by Quentin Tarantino. The structure of the film is configured as two mirrored stories, the first half clearly anticipating the second, or, more precisely, the second half seeming to reimagine the more conventional first part as a primitive tribal dance.

The beginning of the film is the burgeoning love story between a soldier, Keng (Banlop Lomnoi), and a country boy, Tong (Sakda Kaewbuadee). Tong shyly resists Keng’s declarations and shows of affection and Keng’s request that Tong join him when he leaves for maneuvers in the country. Tong seems to act out of shyness, you get the feeling that same-sex love in the countryside of Thailand is not problematic here, as that there is no proscription against being gay. We’re simply watching the playfulness of two boys falling in love.

But when Keng leaves for duty, Tropical Malady turns into another movie. Storybook illustrations and titles relate the legend of a powerful shaman who can turn himself into a tiger. In the region where the soldier is stationed, there has been a disappearance and cows are turning up slaughtered. We, and eventually the soldier, see a naked boy (Sakda Kaewbuadee, who plays Tong in the movie’s first half) running through the jungle, his body covered in faint stripes that suggest the stripes of a tiger. Eventually the soldier realizes this “tiger” has come to devour his soul. Because Weerasethakul equates Keng and Tong’s suffocating love for one another to a twisted landscape of trees, Tropical Malady asserts that the deepest romances are not sexual but spiritual in nature.  A glorious mood piece, the film mirrors the yin of Keng’s pursuit of Tong throughout the first half of the film to the yang of Keng’s spiritual journey through the second half.

In the first narrative, Keng (Banlop Lomnoi) is a soldier assigned to a post in a small city in rural Thailand. One of the troops’ duties is to investigate the mysterious slaying of cattle at local farms. While in the field one day, Keng briefly meets a villager named Tong (Sakda Kaewbuadee). Later, Keng sees Tong riding in a truck, they talk some more, and a romantic friendship soon develops between them. Keng helps Tong with his job at an ice factory. One night while driving an ice delivery truck, they find a sick dog on the side of the road. They bring it to a veterinarian, but learn that it has cancer. In turn, Tong signs a form to allow it to undergo chemotherapy, as it is too old to survive an operation. Later, the two of them go to a movie theatre, where they first begin touching each other.

While sitting together the next day, they seem to have fallen in love and we see Keng ask Tong if he can rest his head in Tong’s lap. Tong thanks him for the tape of the music group The Clash that Keng had given him, but wondered if and when he will give Tong his heart. They are approached by an older woman (Huai Dessom) who tells a story on how two poor farmers lost an opportunity to become rich. In the story, a young monk instructed them to collect rocks from a nearby pond. After doing so, the rocks turned to silver and gold. When they greedily went back for more though, the silver and gold bars they had previously obtained turned into toads. The older woman leads Keng and Tong to a nearby temple and descend into a cave below the ground, where she tells them to not let the light go out or bad things might happen. After the cave, Keng and Tong follow the woman in her car to a mall in the city and then to visit the woman’s sister with whom they share lunch. The woman’s sister tells the young men that she is successful in business, thanks to a phallus charm that she acquired and takes it out to show them.

In the evening in the city, Keng and Tong have drinks at the outdoor venue where a woman is singing romantic ballads. Tong puts in a request for a certain song that is dedicated to Keng, and later joins the female singer on stage for a duet that clearly is a mark of romantic intention. Keng is very handsome and gets fleeting glances and casual exchanges with several young men who seems to know Keng from some previous encounters, possibly sexual. But this goes unnoticed by the young country boy Tong.

Then Tong abruptly wanders off into the dark. The next day, Keng and his fellow soldiers in the army troop leave the village. Keng overhears some people saying a monster keeps killing their cattle. He is sitting on his bed and looking at some old photos in his photo album – one with Tong and another with a different young man. Then suddenly the film goes dark. As we enter the second narrative. A young woman comes to ask a soldier up in a tree with his rifle to come down and help her because she says her mother is sick with a high fever. He follows the young woman in the forest and sees her tiger tail protruding beneath her skirt and kills her as the tiger shaman. But there is a curse put on the forest as the tiger shaman will continue to roam for eternity. At first, this narrative seems totally disconnected from the romantic story of Keng and Tong. But soon, we come to realize that it is the mirror opposite of what has preceded it.  If Tropical Malady begins as a simple love story, it turns into something more profound when Keng enters the jungle in pursuit of a creature allegedly responsible for killing Tong’s mother’s livestock.

The soldier Keng (Banlop Lomnoi) is sent alone into the woods to kill the spirit of a tiger shaman, who actually looks like Tong (Sakda Kaewbuadee). He follows its paw prints and waits by a tree once it gets dark. When he wakes up the next morning, he finds himself face to face with the shaman in human form, a naked young man with tiger-marking tattoos on his body and face. Keng chases the shaman and fights it, but is knocked unconscious and pushed down a steep slope.

When he wakes up, he still has his gun, but his radio and backpack are destroyed. A talking monkey tells the soldier he needs to kill the shaman; otherwise, the soldier will be devoured and will enter the shaman’s ghost world. When it gets dark again, the soldier hears a sound in the distance and fires his gun in that direction, only to discover he killed a cow. The cow’s spirit then rises from its body and walks towards a glowing tree.

It’s a night world in which, like a tiger, we learn to see in the dark. Sometimes all we can make out of the soldier is the outline of his features limned by the moon. All we see of the forest is what the soldier’s greenish flashlight beam picks out. And what gets under your skin is that even though we see only bits and pieces, the surroundings seem just as alive as they do in daylight scenes (part of that is thanks to the superb sound design by Akritchalerm Kalayanamitr).

Keng is quite distraught after killing the cow and gets down on his hands and knees crawling through the tangled roots and underbrush. He seems terribly frightened, sensing the shaman can smell him from miles away and is following him. The soldier loses his gun and begins walking on his hands and knees until he comes across the tiger shaman in a tree. We see an old painted image of a tiger along with an intertitle that is accompanied by a voice, as if from a dream. “Once upon a time there was a powerful shaman, who could turn into animals, a creature who exists only in the memories of others.” After staring at each other for a while, the soldier says “I give you my spirit, my flesh, and my memories” as an old illustration of the image of the tiger shaman absorbing him is shown on the screen. The soldier continues looking up at the tiger shaman as the wind picks up.

Tropical Malady seems like a simple story but it is complex in its mirrored images and structure. Weerasethakul successfully evokes an existential fiber between sexual desire and cultural mythos in the pastoral jungle outside of a Thai village. The unpredictable connecting second story picks up on local Thai folklore the claim that the boy was transformed into a mythic man-eating tiger, capable of being a shape-shifting spirit (shaman), and the soldier goes by his lonesome into the heart of the Thai jungle in search of him. At first the soldier is the hunter but then becomes the prey, as Tong morphs into himself by day (supposedly he’s the ghost of the tiger). There’s a connection made in the two tales between the relationship of man and nature, and gives an allegorical voice to reaching fulfillment through death.