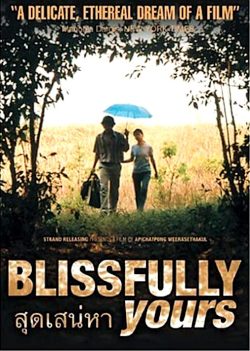 Los Angeles, CA (The Hollywood Times) 4/23/22 – Currently the American Cinematheque is running a retrospective of the films of Thai auteur Apichatpong Weerasethakul and on Tuesday April 19, there was a screening of his early feature film Blissfully Yours (2002) at the Los Feliz Theatre in Los Angeles. Blissfully Yours is a slow-moving story of a love affair between a young Thai woman and a young male refugee from war-torn Burma that begins during a picnic on the Thai-Burmese border. Weerasethakul made after his experimental documentary Mysterious Object at Noon (2020) and before he finished his award-winning film Tropical Malady (2004). Weerasethakul (b. 1970, Bangkok) grew up in Khon Kaen, a city in the north east of Thailand, but he is familiar with the mountain region of Mae-Hong Son in northwest Thailand (west of Chiang Mai), which has many Karen tribal people living there after fleeing the violence of the Burmese Army in its annual raids on villages on the Myanmar (Burmese) side of the border. Weerasethakul describes Blissfully Yours as a “sweet romance” that moves at a profoundly unhurried pace.

The movie is set on Thailand’s northwest border. Min (Min Oo) is an illegal immigrant from Burma, afflicted with a skin condition of psoriasis. Often silly and girlish, Roong (Kanokporn Tongaram) and her older co-worker Orn (Jenjira Jansuda) look after the taciturn refugee. The movie begins with Min getting a medical examination; after 45 minutes or so, it inexplicably shifts gears – providing opening credits and a perky samba – as Min and Roong drive into the jungle, Flintstones knickknacks bobbling merrily on the dashboard. They pick berries and find a scenic spot to picnic. Roong kisses a skittish Min, but contact is uncomfortable for him. The couple are fending off ants when Weerasethakul cuts to Orn and a man named Tommy unglamorously having sex somewhere else in the forest. It’s part of the movie’s charm that the viewer is also lost in the woods. Finished with her tryst, someone steals the motor scooter and Tommy rushes off to try to catch the man. Meanwhile Orn wanders off through the underbrush of the mountain forest. Eventually in the valley downstream, she stumbles upon Roong blissfully servicing Min. Later, Roong spends long, dreamy minutes playing with Min’s penis or just gazing up at the clouds in the sky.

The political backdrop hidden under the surface for the more perceptive viewer makes more sense when one realizes that Roong is a member of the Karen ethnic group. The Karen are a hill tribe people in the area who have been involved in human-rights struggles with both Thailand and Burma. Karen women are known as “long necked” for wearing distinctive gold neckpieces that cover their entire necks. In 2001, the Thai economy was seen as shaky, and part of the reason was the huge influx of Karen refugees due to the Burmese military junta causing the collapse of Myanmar’s economy. Each year in Karen state, usually during the dry season, the Burmese military attacks Karen villages. The military often burns down the entire village, destroying rice stocks and supplies that enable a community to survive. If the residents of these villages are able to escape, they go into hiding as Internally Displaced People (IDPs) in the surrounding forest.

The film revolves around three central characters, whose relations are never precisely defined. Min is an illegal Burmese immigrant, who can barely speak a word of Thai. Roong, a resettled young woman from the Karen hillside tribe, is his lover and main channel of communication. The older Orn looks after and over the two, as events unfold in real time. At first, we see Orn and Min in the doctor’s surgery, trying to get some advice and, through bribery, a certificate of good health, essential in Min’s quest for a job, followed by the two traipsing around town on errands until they meet up with Roong and leave for the country. It is at this point that the director really turns convention on its head. The music and credits strike up 45 minutes into the film and you realize that this has all been merely an introduction.

For the rest of the time, the main characters are in the jungle or tropical mountain forest of northwest Thailand, and superimposed on the whole affair are Min’s narration and drawings, which serve to illuminate (or complicate) relations between them. Min takes Roong to a secluded spot for a romantic picnic, whilst Orn is occupied elsewhere, and the camera focuses on the two as they move around and talk until the finale – or end scenes, as there is no culmination in the narrative – when Orn interrupts the couple.

Weerasethakul says the film is meant to be an “emotional disaster movie,” and you can see why. The uneasy “love” triangle becomes more obvious as the two women come into conflict over small things, like wading in the water – underlying this friction is a split of far greater depth.

The visit to the jungle is itself a break from city life, depicted in the first part of the film, but the relationships, too, are only brief. As the end-titles tell us, Roong is only with Min for a short period, before getting back with her ex. Min is only in Thailand until he can find himself a job elsewhere and seeks enjoyment in an attempt to escape from the pain of his skin condition. Orn, meanwhile, seeks pleasure through an affair with Tommy, but in the long term wants another child with her husband.

Roong checks out of work for the afternoon, sure she’s going to soon quit her job. She borrows Orn’s car and rides off to the desolate but lush jungle for a picnic with Min, where she yearns to hold him. Min takes her to his favorite spot, where the view is idyllic. The only thing that spoils their bliss is the invasion of red ants, which they are busy clearing off from their food. Meanwhile the not too attractive Orn is unglamorously screwing her lover in a different spot in the jungle. When they finish humping, the lover hears someone stealing his motorbike and chases after the unseen culprit. He never returns. So Orn wanders through the woods and by chance locates Roong and Min by a stream, after she just finished giving Min a blow job.

The film, in its light mood, takes its cues from the straightforward Min, whose diary notes and sketches are sometimes superimposed over the images. It’s interesting to note that the credits don’t appear until some 45 minutes later after the opening scene of Min’s visit to the doctor. Min, being an illegal Burmese immigrant, can barely speak a word of Thai and relies on Roong, his girlfriend, as his main channel of communication. The dreamlike depiction of reality, especially with the jungle scenes, will become a dominant force in many of Weerasethakul’s later films, including Tropical Malady (2004), Uncle Boonmee Who Can Recall His Past Lives (2010), Cemetery of Splendor (2015), and his latest Memoria (2021).