Hollywood, CA (The Hollywood Times) 10/22/2018 – Weed the People – a documentary – is an emotionally driven journey that tracks the lives of five families – each with a child with cancer as a death sentence. The parents are desperate to find hope in some form of alternative treatment in trying to find a cure for the various cancers these kids have – who range from infancy through their teens – turn to medical cannabis at any cost. 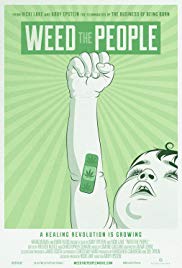 We find that medical cannabis had been off-limits to researchers and doctors in the US for the past 81 years – even when it had proven to have medical benefits. The Marihuana Tax Act of 1937 was signed by FDR – due to racially biased beliefs that Mexican immigrants were coming to the US to distribute “killer weed” with their “Jekyll-and-Hyde” personalities to unsuspecting American schoolchildren. The American Medical Association objected, knowing that cannabis had real value in treatments for stomach ailments, seizures and more. They went unheard.

In 1968, the Vietnam War’s bloodiest year, 1% of Americans lost their lives while serving. This pales in comparison to 2016’s research that 1.5 % percent of all American deaths in 2016 were caused by the opioid epidemic. It’s legal and that’s the fight of every doctor, parent, scientist and advocate in this documentary – to legalize cannabis so that clinical trials that take place in other countries (predominantly Israel) will begin quickly to educate doctors in order to assist patients – children in this case. The inference being that the opioid vortex could’ve been avoided as cannabis was labeled a schedule 1 drug – the same class as heroin, LDS and cocaine.

Director, Abby Epstein interviews with experts, practitioners, patients and parents that are interwoven throughout to provide both medical and historical context for the need and demand of cannabis. It is worth noting that research has proven alcohol to more dangerous than marijuana, the US Drug Enforcement Administration’s fact sheet states that “No death from overdose of marijuana has been reported.”

Desperate parents choose to obtain medical cannabis as a treatment of choice – some along with chemo – in the hopes of altering dire prognoses their child has been given. The waters are unchartered, frightening and much is a guessing game or trial-by-error or by success.

It’s not an easy view but an important one for any audience to understand a different side of what could be. It is part human tale, part broadside and part instructional.

One family stands outside the DMV as the father gets California residence so that their son may receive treatment. The lives that are changed can’t be solely attributed to using cannabis yet, the doctors say their chemo treatments can’t be the sole reason for any changes.

It will tug at your heart as you’re invited into a world where these families take their children’s survival into their own hands. Some of the miraculous outcomes shown begets the unsettling question at the heart of this film: If weed is truly saving lives, why doesn’t the government want people to access it and educating doctors so they can help their patients? We’ve a long way to go… again. Redoing what once was started and stopped.

Weed the People succeeds in pounding a drum that is loud enough for the deafest of ears to hear the plea for the plight of the little ones who suffer or go unseen – unless, fortunate enough to have a parent/parents with resources.

This documentary forces us to examine what we might do if our child were given a death sentence and the only option directed by a physician were outdated treatment plans.