The CW’s Jane The Virgin and Crazy Ex-Girlfriend: The Farewell Seasons 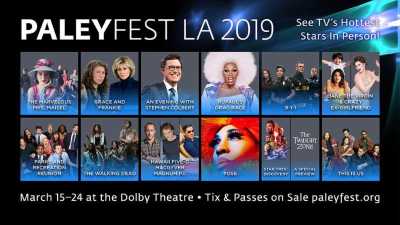 As the Television industry’s premier television festival, PaleyFest presents cutting-edge programs and connects TV fans with the stars of their favorite shows. Produced by The Paley Center for Media, this year’s festival takes place March 15-24, 2019 at the DOLBY Theatre in Hollywood. The celebration features today’s hottest tv shows with a special screening picked for the audience followed by a discussion and audience Q&A with the stars and creators of the series. PaleyFest is open to the public and tickets are currently on sale at PaleyFest.org.

The Festival benefits the Paley Center’s preservation and archival digitization efforts, and its ongoing mission to explore the significant impact of media on our culture and society. The Paley Center is home to the nation’s foremost publicly accessible archive of television and radio content, with over 160,000 programs spanning the history of media, including collections that feature achievements in television from the African-American, Hispanic, and LGBTQ+ communities, women, and most recently music.

The Paley App and the Paley website are portals to ticket sales and content including PaleyFest photos and video clips. Fans are invited to follow @paleycenter on Twitter for immediate news and for live tweeting from the events, and to join in the conversation with #PaleyFest. To purchase tickets, become a Member of the Paley Center, download the Paley App, and more, please visit paleyfest.org.

About The Paley Center for Media:

The Paley Center for Media, a 501(c)(3) nonprofit organization with locations in New York and Los Angeles, leads the discussion about the cultural, creative, and social significance of television, radio, and emerging platforms. Drawing upon its curatorial expertise, an international collection, and close relationships with the leaders of the media community, the Paley Center examines the intersections between media and society. The general public can access the Paley Center’s permanent media collection which contains over 160,000 television and radio programs and advertisements and participate in programs that explore and celebrate the creativity, the innovations, the personalities, and the leaders who are shaping media. Through the global programs of its Media Council and International Council, the Paley Center also serves as a neutral setting where media professionals can engage in discussion and debate about the evolving media landscape. Previously known as The Museum of Television & Radio, the Paley Center was founded in 1975 by William S. Paley, a pioneering innovator in the industry. For more information, please visit paleycenter.org.