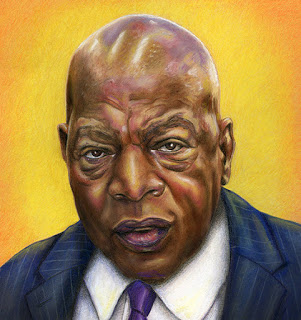 THT joins others around the country in mourning the loss of congressman and civil rights icon, John Lewis. From Selma, Alabama to the halls of Congress, Rep. Lewis dedicated his life to the fight for justice and human dignity. Personally, he is one of my greatest heroes, and I share the feelings of devastation many of you feel at his passing.

In 2007 in Selma, President Obama paid tribute to Congressman Lewis as part of the “Moses Generation” of civil rights leaders whose heroism paved the way for future generations of activists, saying “I’m here because you all sacrificed for me. I stand on the shoulders of giants.” Truer words were never spoken about the enormous contribution of this legendary man to the struggle for dignity for all people. We all stand on John Lewis’s shoulders, and we must today pick up the torch to continue the work to which this great man dedicated his life.

As a tireless advocate for LGBTQ equality, he was not only a defender of marriage equality as far back as the 1990s (long before it was fashionable), he introduced the Equality Act, a bill to prohibit discrimination on the basis of sexual orientation or gender identity in employment, housing, credit, education, and jury service. He also stood with our communities against the recent attacks from the Trump administration that we are fighting in court, including the ban on transgender service members and the anti-transgender health care rule.

Every one of us who continues the fight for equality and civil rights in our own communities owes a great debt to this fearless, tireless leader who stood on the frontlines for six decades.

Our thoughts are with Congressman Lewis’ family, loved ones, and everyone inspired by his contributions. Our Lambda Legal family honors his legacy by continuing the fight for justice and equality for all.