BBC AMERICA has released a sneak-peek from its upcoming episode of Dynasties II, which follows elephants in the Amboseli National Park. In the clip, a family of elephants venture into a swamp in search for the best grass, but their quest takes a troubling turn when an elephant calf gets stuck in sticky mud. Click here to view the sneak-peek clip. The “Elephant” episode premieres on Saturday, May 28 at 8pm ET/7pm C on BBCA and AMC+.

From Emmy®-winning executive producer Mike Gunton (Planet Earth II, Dynasties) and narrated by Emmy®-winning famed naturalist Sir David Attenborough (Seven Worlds, One Planet, Blue Planet II), the six-part series, in addition to a ‘making of’ episode, provides a fresh insight into the secret lives of some of the most charismatic animals on the planet – puma, elephant, cheetah, hyena, meerkat and macaque – featuring surprising, dramatic and heartwarming stories with the iconic favorites from the animal kingdom. All-new episodes of Dynasties II premieres on Saturdays at 8pm ET/7pm C on BBC AMERICA and AMC+.

“I know we all have seen several films or shorts on elephants, but i truly have to say this is the most outstanding episode filmed on a family of elephants. Especially the fact you get to witness twins calves, which have only been recorded five times in Kenya and these two are adorable.  The photography is brilliant and you truly feel as you are a part of this GIANT family.  You will be on the edge of your seat with the struggles their mother Angelina and the herd has to go through to keep them alive.  It is all about family, like God intended.” Judy Shields, The Hollywood Times

Amboseli National Park – home to a once thriving family of elephants. However, since the death of their experienced matriarch, the herd have struggled to keep their calves alive. But now a new leader is beginning to emerge – a pregnant female called Angelina.

Within a week, Angelina has given birth to not just one calf, but twins – Atlas and Alana. Twins are an extraordinarily rare occurrence in an elephant family – only recorded five times in Kenya – and although it may seem like a cause for celebration, the odds of Angelina and her family keeping the twins alive are stacked against them.

They face countless dangers – the deep thick mud of the treacherous swamp, the aggression of testosterone fueled bulls, the peril of a drought and even ever-circling predators. The mischievous, playful twins however are blissfully unaware of the challenges that face them, and how much they still need to learn from their mother, aunts and cousins. Angelina and her family must draw on all their accumulated experience if they are to keep these precious calves, and the dynasty, alive. 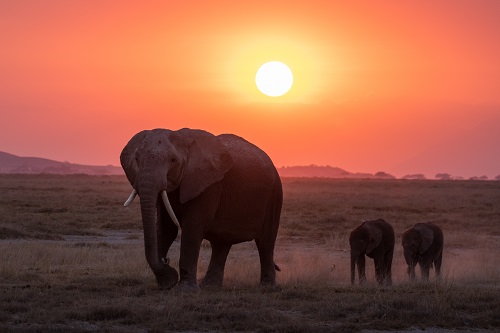 AMC+ is the company’s new premium streaming bundle featuring an extensive lineup of popular and critically acclaimed original programming from AMC, BBC America, IFC, and SundanceTV and full access to targeted streaming services Shudder, Sundance Now and IFC Films Unlimited, which feature content such as A Discovery of Witches, Creepshow, and Boyhood. The service features a continually refreshed library of commercial-free content, including fan favorites Mad Men, Halt & Catch Fire, Turn: Washington’s Spies, Hell on Wheels, NOS4A2, Rectify, Orphan Black, Portlandia, and series from The Walking Dead Universe, among many others. The service also offers a growing slate of original and exclusive series including Gangs of London, Kin, The North Water, Ragdoll, The Beast Must Die, Too Close, The Salisbury Poisonings, Cold Courage, Spy City, Ultra City Smiths, Anna, Anne Boleyn, Firebite, La Fortuna and upcoming That Dirty Black Bag. AMC+ recently launched in Canada and Australia, and is available in the U.S. through AMCPlus.com, the AMC+ app, and a number of digital and cable partners.

To experience Wonderstruck at any time or day of the week, please visit WonderstruckTV.com, a free digital companion site featuring a robust library of short-form nature content, optimized for mobile or desktop. You can search by mood, animal or geographic location to access an immediate burst of wonder.