It’s no small occurrence, and A-list personalities from James and Dave Franco to master filmmaker Guillermo Del Toro to Academy Award winner Natalie Portman took seats to discuss their careers in live conversations for rabid consumers of pop culture awareness.  Over two days, the frenzy never died down.  Some stars allowed themselves to be photographed on the carpet by Getty and the AP.  Others went straight for their panels.  In all cases, the discussions were brutally current, sometimes poignant, and always exactly as in-person as Vulture promised they’d be.

James and Dave Franco were particularly laid back on Saturday as they discussed “The Disaster Artist” before a packed audience.  The film tells the story of the cult-classic The Room by infamous Hollywood outsider Tommy Wiseau.  James is particularly hilarious in person, especially as he recounted his experiences dealing with the idiotically ambitious and eccentric Wiseau.  Franco is a gifted mimic, which made the conversation even more entertaining.

“I went through the book and listened to these tapes and I just wrote them down, like in my phone so I’d have ‘Tommyisms.’”  These “Tommyisms,” incidentally, are wildly hilarious, and Franco had his audience doubled over.  “This is real Hollywood movie,” he’d crack.  “Now, you’re five cents.”  His bizarre dialect and twitchy mannerisms were more than anybody could take, and he went on.  “These were all Tommyisms that I just had, that I kind of needed because we improvised a lot and I’d have to improvise as Tommy.” 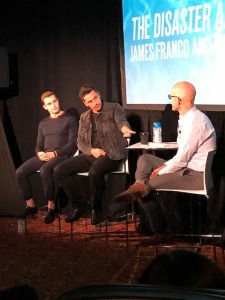 “As much as all of us don’t want to admit that we all have some Tommy Wiseau in us, I think we have more than we think,” added Dave.  Proof of this came in the female version of Wiseau; an aspiring actress who’d pushed her way to the front just prior to the Q and A and gotten ahold of the microphone to ask….if James Franco would like to join her organization. Franco didn’t answer at all, but moderator KPCC’s annoyed John Horn curtly explained that the question and answer period was not for solicitations or opportunists…it was for legitimate questions.

Fascinatingly enough, she did not show up to the next panel—a highly cerebral and deeply emotional discussion between film genius Guillermo Del Toro and actor Doug Jones.  Their fantasy film “The Shape of Water” will be hitting theaters the same day as “The Disaster Artist”—December 1st.   The film has already received wide acclaim, having received The Golden Lion for Best Film at the Venice Film Festival.

“It’s a love letter to love, and it’s a love letter to cinema,” he said of the film.  Del Toro and Jones, who plays the “amphibian humanoid” known as “The Asset,” spoke a great deal about the process of creating that character, and in particular about a bathtub love scene that’s generating buzz among critics.

“It’s almost like a ballet of beauty.”  He said of the scene.  “Any form of love that is not dominance is allowed and beautiful; and should be.”  Del Toro said it’s one of the most beautiful cinematic moments he’s ever shot.  “It’s gentle, and it’s poetic, and it has that breath.”

Monsters have often played a big part in Del Toro’s films.  “The Asset” has a special meaning in “The Shape of Water.”   “It has a power and a beauty to it,” he said.  “It represents ‘the other.’  Because we live in a time where we demonize ‘the other.’  We are told we gotta fear it.”   Del Toro stressed that there really is no other; there is only us.

To quote everything profound Del Toro said would be to simply transcribe the entire hour.  He drew a parallel between his “fairy tale for troubled times” and “Beauty and the Beast,” saying that the beauty doesn’t have to be a perfect princess, and the beast doesn’t have to be transformed into a “boring f***ing prince” to be loved.

“To me, love is not transformation. Love is acceptance and understanding.  So it’s a very different version of a tale like that; it’s a fairy tale for troubled times.”  He received spontaneous applause for that assessment of his own work.

Actor Doug Jones, whose astounding work on Del Toro’s previous films, was alongside him to discuss how silent work can be more piercing than dialogue.  “Touch doesn’t lie,” said Jones of the quiet romance with his co-star Sally Hawkins, who plays mute cleaning lady Elisa.  “Words can be polluted but touch is very pure, so our love came from all of that.”

By the time the lights came down and the fans went home Saturday night, panels including Sofia Coppola, Scandal, Stranger Things, Pixar’s Coco, Amber Tamblyn, Robert Pattinson, and Search Party had already concluded; a full day still lay ahead.  So Festivalgoers re-fueled their tanks at the trendy poolside Vulture-Lounge, or began to spill out onto the walk of fame or into the lobby.  With so much to look forward to, it didn’t seem too tragic to take a break.