Los Angeles, California (The Hollywood Times) 11/26/2019 – Many commitments delayed my ability to write about this night on November 16th.  I would, normally, put it behind me. Let it go.

I could not let the feel of this event go.  It was in, many ways, in a area that I am unfamiliar with.  I had not been to the church before. It is a Massive concrete structure reinforced with more than 500 tons of steel.

The First Congregational Church of Los Angeles is a Historic Stunningly Beautiful Neo-Gothic EPIC Cathedral: designed by architects Alison and Allison. It was dedicated in 1931.

Every piece of the building is striking from the stained-glass windows to the majestically high ceilings. The location was unfamiliar to me and surprisingly pleasant.

The calm that I felt when entering the vine covered courtyard remained with me.

The unfamiliar feeling stayed with me as I walk into the church. I glanced at the program. I stopped to see the program.  Vox Femina has expanded its view of itself. There is a growth and change. This fluxed my interest.

I have enjoyed the history and the dedication and the music of Vox since the first note came to inform the community that Dr Iris S. Levine was going to change the world with notes. She wished to change the meaning of blending our voices.

Looking at the program for November I had cause to remember those days, that excitement, that longing, that hope.  I walked into the seating area fearful. My expectations were too high.

The choice of music created the impression that it would be varied enough to please all ears.  Could this be accomplished? The alliance with Mira Costa High School/ Director Michael Hayde and the collaboration with Composers Jocelyn Hagen appeared to be ambitious.

I sat down next to a woman and began chatting. I inquired, what was she expecting for of the evening. As we spoke I felt confirmed.  We both were awaited an exciting evening. When I mentioned that I feared disappointment she said, I hope not, my daughter has been working with the school MM Choral and Vox for a year, in preparation for this night.

I heard stories of the effort that Vox Femina puts into molding youth: the work and effort that is demanded of the students. This mother spoke with great pride. I am happy to report that the sweat and discipline, the endless hours of practices and unforgiving need for perfection shone thu. 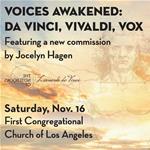 The performance of Antonio Vivaldi’s Gloria in excelsis Deo  by Mira Costa was the perfect hymm in, the perfect setting and song to sweet perfection The glory of music was felt in the rafters. They accomplished the meaning of giving glory to god on high with melodic tones.  The placement of this choir was mid way in the program, heighten the evenings glee.

This piece came after Handels Dixit Dominus ( Handel,s 1707 psalm, in baroque style) conducted by Dr. Iris S. Levin had ebullient notes bouncing off the walls and vibrating our souls.

The director of the ensemble, Levine, captured period elegance in a glorious and invigorating manner.

Next came Lauda Jerusalem (by Nicola Porpora composed in1745)

Just when its seemed the Orchid Quartet had given their all conductor Lori Marie Rios raised the bar bring them to magnificent.

There was a dedication to the preservation of music of the Renaissance and Baroque eras. That was successful because of the flair and technique of ensembles that are blessed with such unbridled talent.

Founded in January 1997, VOX Femina Los Angeles gives women voice through the performance of quality choral literature. Diverse in culture, age, race, belief, and sexual identity, we are dedicated to commissioning new works and raising awareness about issues that affect us as a family of women. Through our music, we seek to create a world which affirms the worth and dignity of every person.

Since our debut in April 1997, VOX has performed a catalogue of music exemplifying diverse musical styles and repertoire. In keeping with our mission, VOX has commissioned over 40 new works for women’s voices, and collaborated with over 35 contemporary composers. In addition to our season schedule, VOX has been active in community outreach, performing and participating in over 200 community events and collaborating with other arts organizations such as the LA Philharmonic, LA Master Chorale, Gay Men’s Chorus of Los Angeles, CONTRA –TIEMPO, and the Los Angeles Women’s Shakespeare Company. VOX has released three recordings: “Taking Shape” (1999) and “Still I Rise,” (2002) are collections of live performances. Our studio CD entitled “Simply… VOX Femina Los Angeles” (2006) was awarded Best Recording by a Choir by OutMusic.

MISSION: VOX Femina Los Angeles gives women voice through the performance of quality choral literature. Diverse in culture, age, race, belief and sexual identity, we are a chorus committed to commissioning new works and raising awareness about issues that affect us as a family of women. Through music, we aim to create a world that affirms the worth and dignity of every person.

Through music, we aim to create a world that affirms the worth and dignity of every person.