Advertisement
Home Activism VOD release TOMORROW Tuesday 6/6 via Ro*Co Films THE FREEDOM  TO MARRY
Facebook
Twitter
Pinterest
ReddIt
Email
Trailer: https://vimeo.com/200054979
Civil rights doc THE FREEDOM TO MARRY will release digitally on June 6th via Ro*Co Films in the U.S. and Canada. This is the epic, untold story of how same-sex marriage became law of the land.

Documenting one of the greatest civil rights stories of our time, THE FREEDOM TO MARRY is a nail-biting, behind-the-scenes story that traces the marriage equality movement’s historic progress, and reveals the masterminds of the movement they lead the fight to win same sex marriage throughout the United States.
THE FREEDOM TO MARRY follows Evan Wolfson, the architect of the marriage movement, attorney Mary Bonauto, and their team through their decades long battle, culminating in a dramatic fight at the United States Supreme Court. More than the saga of one of the most importnant civil rights stories of our time, this is an inspiring tale of how a real change occurs, even against the biggest odds.
Directed by veteran doc filmmaker Eddie Rosenstein, produced by Jenni Olson & Amie Segal. After a successful national theatrical run this spring, THE FREEDOM TO MARRY will now be available digitally in June, timed to national LGBT pride celebrations this summer.
######
The essence of the right to marry is the freedom to marry the person you choose.
-Evan Wolfson, architect of the Freedom To Marry movement
When something is wrong, you do something to change it.
-Mary Bonauto, landmark civil rights attorney (Obergefell vs. Hodges)
“Thoroughly moving and inspiring”
-Boston Globe
“Landmark…this summer’s hot documentary.”
-Curve Magazine
Ro*Co Film presents
THE FREEDOM
TO MARRY 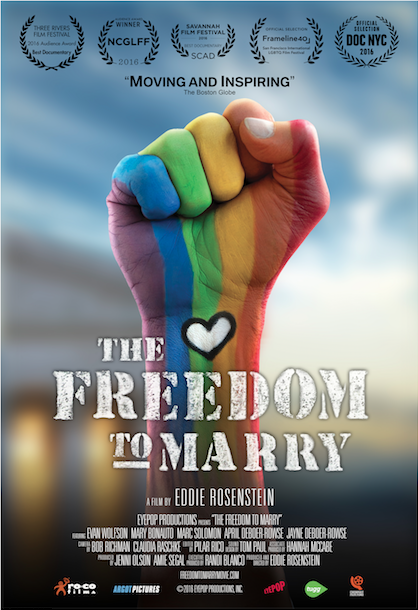 Exec. Producer: Randi Blanco
Featuring: Evan Wolfson (Founder/President, Freedom to Marry), Mary Bonauto (Civil Rights Attorney, GLAD), Marc Solomon (National Campaign Director, Freedom to Marry), April Deboer-Rowse, Jayne Deboer-Rowse (Supreme Court same-sex marriage plaintiffs)
RELEASE PLATFORMS:
THE FREEDOM TO MARRY will be released in the U.S. and Canada via Ro*Co Films June 6 on VOD and across digital platforms including iTunes, Amazon, and Google Play.
Synopsis:
THE FREEDOM TO MARRY traces the marriage equality movement’s historic progress through the four decades of work by Evan Wolfson, the architect of the movement (who is the founder and president of Freedom to Marry), and pioneering civil rights attorney Mary Bonauto, who argued many of the key cases, including the landmark Obergefell v. Hodges decision. This doc follows the team’s audacious battle over decades, starting in the 80s when gays and lesbians were a despised minority, through their final case before the United States Supreme Court seeking the right for all Americans to marry the person of their own choice. With fascinating depth, this film profiles the LGBT heroes who worked tirelessly for decades to make the dream of marriage equality a reality.
Filmmaker Bio:
Eddie Rosenstein is a veteran documentary filmmaker based in NYC. His award-winning films, which have been seen around the world, include: TICKLE IN THE HEART, WAGING A LIVING, SCHOOL PLAY, SANDHOGS, BOATLIFT, REALITY PEOPLE and THE GOSPEL ACCORDING TO MR. ALLEN. He has produced television programming for networks including A&E, TruTV, History, Discovery ID, HBO. PBS and AMC and has won dozens of international awards. Rosenstein teaches documentary filmmaking at the New York Film Academy, lectures frequently, and is extremely active in the non-profit world, particularly for children’s causes. He lives in Brooklyn, NY, with his wife and two sons.