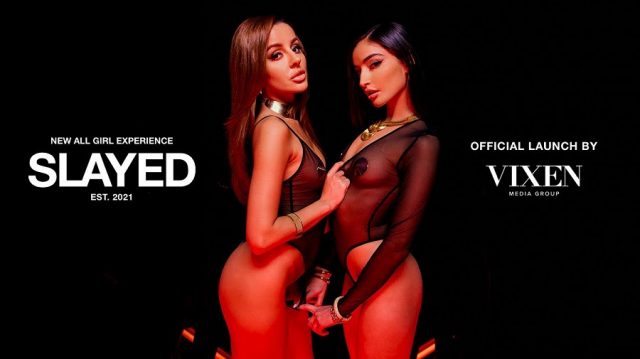 The award-winning adult studio introduces new brand focused on all-girl content for its network of sites
LOS ANGELES (Aug. 5, 2021) – Vixen Media Group, the leader in luxury adult entertainment, today announced the launch of its newest and first all-girl brand, SLAYED.  The brand was created as part of a mission to revolutionize female sex portrayals while attracting an audience of all genders and sexualities. The scenes featured on Slayed.com reflect VMG’s renowned production style and meticulous attention to detail paid to the high-end aesthetic of today’s adult performers.
“In a world where female empowerment and sex-positivity are taking the lead, we felt that there was no better time to put women front and center and launch a fiercely female-focused site,” said Alexandra Taylor, Marketing Director at VMG.
“We wanted to create something special where performers would be more than proud of the final result.  Something that would be the first thing they share with their audience, even new friends at an upscale dining table.  That is ultimately what led us to develop Slayed as a brand,” said Executive Producer Mike Miller.  “The first thing you will notice about this product is that it’s a showcase among top-tier adult talent, creatives, and our professional film crew.  Laurent Sky has done a masterful job at bringing this vision to life and our performers and teams have executed flawlessly on it.“
“It was important for me to create an environment on set where the talent felt they could be their true, uninhibited selves. This brand is all about self-awareness and expression, so capturing that to share with the audience is an amazing feeling.” Said Director, Laurent Sky. “From the unique macro shots to the richness of the lingerie, accessories, and locations – it’s really an indulgent experience for viewers, like nothing else I’ve seen before. I am extremely proud of what we have created.”
Viewers can expect to see content from some familiar iconic Vixen Angels such as Emily Willis, Scarlit Scandal, Avery Cristy, and Ariana Marie, as well as some new faces such as Kenzie Anne and Vanna Bardot who all share VMG’s vision and values for the new site. VMG subscribers can anticipate the same unprecedented quality that they experience on Vixen, Blacked, Tushy, and Deeper but with a whole new level of bold performances on Slayed.
“I am super ecstatic to be a part of the launch of Slayed. VMG is really taking the all-girl experience to another level; the glamorous Hollywood sets, their amazing film crew, and me getting to have hot electrifying sex with beautiful girls…it’s what makes it all happen.” said 2021 AVN/XBIZ Female Performer of the Year, Emily Willis.
“My experience working with Slayed is absolutely astonishing. It’s definitely been one of my favorite sites to shoot for. It’s bringing more than just sex appeal to your screens…it’s bringing diversity, passion, and most importantly art. Something you’re not gonna want to miss.” stated 2021 AVN/XBIZ Best New Starlet, Scarlit Scandal.
New scenes will be released on the site every week and for a limited time, Vixen Media Group is extending an exclusive offer for its six-site subscribers to join Slayed for a one-time fee. To check out Slayed’s fierce female scenes, visit SLAYED.com. Be sure to follow SLAYED on Instagram and Twitter for regular updates.
About Vixen Media Group
Founded in 2014, Vixen Media Group is the premier online destination for exclusive and luxury adult entertainment. Featured in Rolling Stone, Forbes, The Daily Beast, BuzzFeed, Men’s Health, Vice, and other outlets, Vixen Media Group’s network of branded websites has more than 30 million visitors each month with more than five million Instagram followers. Its innovative studios – Vixen, Blacked, Tushy, and Deeper – have earned more than 100 awards. To learn more, visit vixengroup.com.