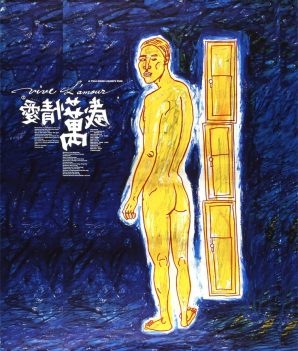 Los Angeles, CA (The Hollywood Times) 4/18/22 – On Sunday April 17, the American Cinematheque screened at the Los Feliz Theatre in Los Angeles a new 4K restoration of Vive L’Amour (1994), the second film of Taiwanese auteur Tsai Ming-liang. The film focuses on three lonely young people in Taipei who unknowingly share the same apartment: Mei, a real estate agent who uses it for her sexual affairs; Ah-jung, her current lover; and Hsiao-ang, who’s stolen the key and uses the apartment as a retreat. The feature had its premiere at the 51st Venice International Film Festival, where it won the prestigious Golden Lion award. It also went on to win the Best Picture, Best Director and Best Sound Effects awards at the Golden Horse Awards. Viva L’Amour. literally “Long Live Love,” is an ironic title for Tsai Ling-liang’s film, since there is nothing remotely similar to love within reach for any of the three protagonists.

Tsai regulars Kang-sheng Lee, who has appeared in every single film by the Taiwanese auteur to date, and Chen Chao-jung both feature as Hsiao-kang and Ah-jung respectively. Writer/director Tsai Ming-liang was born in Malaysia in 1957 and graduated with a degree in drama and film from a university in Taiwan. He has worked in Taiwan since then and has created in his second film a masterful work reminiscent of the Italian filmmaker Michelangelo Antonioni. Viva L’Amour is a stunningly delicate portrayal of urban alienation and loneliness. The number one curse of modern mankind might be loneliness, and Tsai’s take on it is nothing short of extraordinary.

It all starts when Hsiao-kang (played by Kang-sheng Lee), a salesman, finds the key to a new duplex apartment and quietly pockets it. One night, he sneaks into the empty apartment and after using the bath, gets ready to take his life by cutting his wrist. Elsewhere, Ah-jung sees May Lin, a real estate agent, at a food court and follows her. When May Lin catches on to the man’s advances, she invites him to an apartment she is trying to sell for a one-night stand, which turns out to be the same place where Hsiao-kang has just cut his wrist. On hearing the two enter the house, Hsiao-kang stops the bleeding and quietly sneaks out, only to return later and start using the house. Ah-jung (Chao-jung Chen), meanwhile, also steals a key from May Lin (Kuei-Mei Yang) and returns later to live in one of the bedrooms. Both Ah-jung and Hsiao-kang, of course, run into each other eventually and a unique co-existence begins to form between them.

Taipei in 1994 was a densely crowded, booming modern city with a population of more than six million. It experienced a real estate boom in the 1980s but in the 1990s had one of the highest ratios of vacant houses, apartments and offices in the world. This real estate problem serves as the backdrop to the odd love triangle story. The film opens with Hsiao-kang (Lee Kang-Sheng) stealing a key that opens a vacant spacious high-rise apartment. He is a timid young man, who is later revealed to be gay. For Hsiao-kang, who probably just left his parents’ house, the space becomes a refuge from working as a salesman of burial vaults. Hsiao-kang’ job is buzzing with activity because the Taipei cemeteries are so overcrowded and space is so limited and expensive, that wall space becomes a sensible alternative.

We observe the homeless Hsiao-kang make himself comfortable in his new home, and after his bath we see him slit his wrist in a half-hearted suicide attempt. It is puzzling to figure out why he is suicidal, but later we get clues about his angst over his inclination to be a transvestite or his closeted homosexual desires. In the director’s words, “Hsiao-kang is so directionless, scared and in pain that he wants to kill himself. He is always in a state of great loneliness. Home is anywhere he stays.” Actor Kang-sheng Lee is the face of the homosexual longing, unfilled desire and gay loneliness in most of Tsai Ming-liang’s films.

The film’s centerpiece character is a thirtysomething, stylish and sensuous, unmarried woman, May (Yang Kuei-mei), who sells “second hand” real estate. The apartment Hsiao-kang is occupying is the one she is desperately trying to sell. Her long day begins before dawn delivering advertising inserts to newspaper vendors. She then posts real estate posters along choice street spots. She spends the rest of the day on the phone with potential buyers, as she is only too eager to show them the empty apartment. She smokes a lot, as do all three characters, and most of the time stands around bored while waiting for clients or when frustrated chews on watermelon seeds. Her life is lonely and not fulfilling.

May meets a young street vendor named Ah-jung (Chen Chao-jung) in a luncheonette and sleeps with him soon after in the same empty apartment where Hsiao-kang has made himself at home. May and Ah-jung never converse, much less convey any emotions. Though May never meets Hsiao-kang, Ah-jung does. Ah-jung also becomes the object of Hsiao-kang’s affections. In a tender scene near the end, Hsiao-kang crawls into bed with Ah-Jung and finally gets up enough nerve to kiss the soundly sleeping hunk on the lips without awakening him.

Ah-jung displays his upscale women’s clothes, bought on trips to Hong Kong, on the sidewalk at night. He is cocky, sleekly attractive and cold. The director remarks: “Most of these vendors have an easy life; they have a carefree life with few obligations. They can sleep late, stay up till dawn and make frequent trips to Hong Kong. As an observer, I think living like this is taking its toll, bit by bit.”

For May, the apartment becomes a place to take men for sex that she wants to keep at a distance and expects no serious relationship to develop. May’s sex with Ah-jung lacks intimacy, it’s just a way for her to relieve her sexual appetite. While Ah-jung is not capable of loving anyone, nor does he feel any need to be loved. He’s the scariest of the three, as he might be perceived as the city’s future. The three reside in a city dying from inside because it is consumed by materialism. Hsiao-kang is screwed up, but he’s harmless and there’s some hope that he can change. Life scares Hsiao-kang more than death. In one of the film’s strangest scenes, Hsiao-Kang is so hungry for love that he’s caressing and kissing a melon. May Lin is the one most affected by a lack of love. After making passionless love with Ah-jung and then finding her car won’t start, she finally breaks down.

The film ends when May walks through a muddied desolate new Da’an Park (the hope for the city) and sits on a bench. She can’t control herself anymore, as she sobs for a few minutes. It seemed as if she would never stop crying, and when she does it is only to light a cigarette. The film then turns black and ends on that bitter but very moving note. Tsai frames May in a medium close-up shot that lasts for five minutes without changing. All three characters end the film just as alone and as uncommunicative as they were at the film’s start.

In the world of Tsai Ming-liang, Taipei is not a warm or happy city. There’s the vibrancy that comes with being in the metropolis, but for our three protagonists, it’s possibly the loneliest place, each carrying an ocean of loneliness within them. The loneliness that follows the three also reflects in their conversations, or the lack of them. The feature is, for the most part, light on dialogue but the completely dialogue-free first 23 minutes establish that communication is not really a strong point for either of the central characters. Even when May and Ah-jung go about their sexual tryst, hardly a word said between the two, and any sexual moments, including the act of masturbation, carries a sense of angst rather than eroticism with it, highlighting an emptiness that no sexual gratification can fill.

Whatever conversation happens between Hsiao-kang and Ah-jung is also kept to the bare minimum, their discomfort evident. Instead, the focus is on long gazes and unspoken understandings. And yet, despite this lack of communication, Tsai manages to show an intrinsic connection between them. For all three, the apartment acts as a sole temporary respite from the hustle and bustle of Taipei, with Hsiao-kang using it as a retreat of sorts, Ah-jung as a domicile and May Lin using it catch those few moments of relief from her busy but ultimately lonely life.

All the technical traits that Tsai Ming-liang films are now renowned for are also present here. The story is majorly set within the apartment and Liao Pen-jung’s and Lin Ming-kuo’s cinematography shows its wide emptiness to heighten the isolation within it. Taipei, through their lens, takes on an almost surreal appearance, especially during the night sequences. Sung Shia-cheng’s editing, meanwhile, keeps the same leisurely pace that put Tsai and his films at the forefront of the “slow cinema” genre.