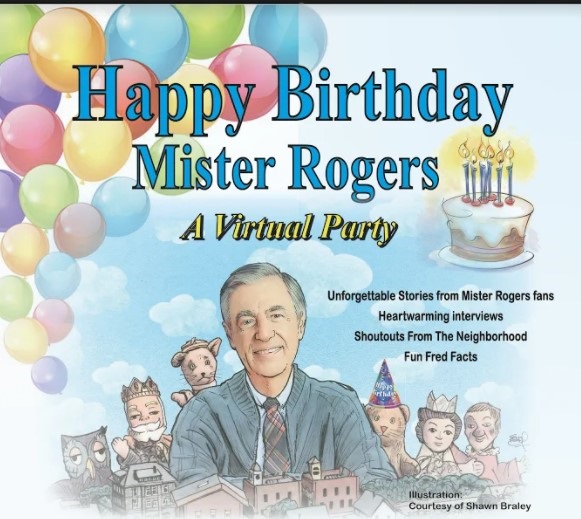 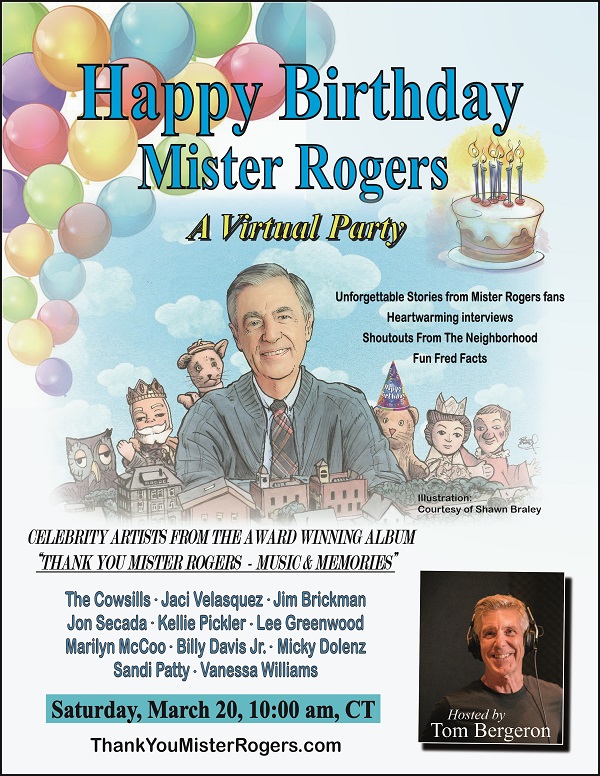 The virtual birthday bash is the brainchild of two-time Grammy and Emmy winning producer, Dennis Scott, who has produced two albums of Fred Rogers’ music: Songs From The Neighborhood – The Music of Mister Rogers (2005) & Thank You, Mister Rogers – Music & Memories (2019). Scott also interviewed numerous fans and supporters of Mister Rogers and was surprised by how many people received personal letters from him over the years. One compelling story is that of a young Connecticut girl who was visited by Fred while she was in a coma recovering from brain surgery.
“I wanted to give folks a chance to tell their stories and express their gratitude to Fred on what would have been his 93rd birthday,” said Scott.

Coincidently, producer Dennis Scott is simultaneously spearheading a grassroots campaign to get Fred Rogers nominated to the Songwriters Hall of Fame. A petition in support of that is viewable at ThankYouMisterRogers.com. 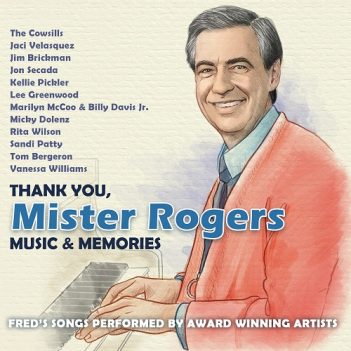 “Fred loved writing songs and becoming a member of the Songwriters Hall of Fame, alongside other great American composers, is the best birthday present we could give him,” said Scott. “Happy Birthday, Mister Rogers!”

Two-time Grammy Award winning songwriter/producer/writer Dennis Scott has left no corner of the children’s music industry unexplored. His songs have been performed by such diverse artists as Faith Hill, Ray Charles, Sugarland, Alison Krauss, The Muppets, Amy Grant, CeCe Winans, Trisha Yearwood, Elmo, Charlie Daniels Band, Shari Lewis, Crystal Gayle, Roberta Flack, Ricky Skaggs, and many others. Dennis is also the recipient of two Emmys, a Parent’s Choice Award, and a Telly. You can hear his work on television, radio, audio books, home videos, and stage productions such as “Clifford the Big Red Dog,” “Sesame Street Live” and “The Magic School Bus.” Dennis began his entertainment career at the age of 7 as an actor on Broadway. As an adult, he toured with the New Christy Minstrels (playing upright bass and singing). His novelty tune “Captain Kirk’s Disco Trek” led to his first serious foray into children’s music and a Grammy for “Sesame Country.” He has had nonstop assignments since then. Dennis has served as Music Director for several children’s TV shows including the PBS series “Noddy” and, most recently, “BJ’s Teddy Bear Club” which airs on TBN and just earned him his second Emmy award. His album, Songs From The Neighborhood – The Music of Mister Rogers won a Grammy award as Best Musical Recording for Children in 2005. His latest produced album, Thank You, Mister Rogers – Music & Memories is available on CD, and wherever digital music is sold and streamed at orcd.co/ThankYouMisterRogers.