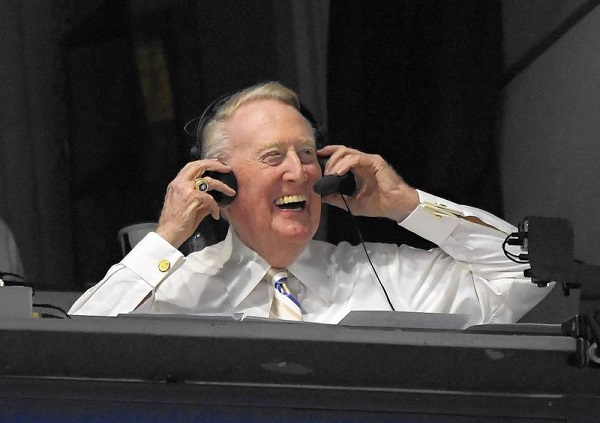 This writer had the honor of meeting him back in 1998 and he was a true gentleman and you can tell he loved his fans and baseball.  God now has a baseball announcer in Heaven.
RIP Mr. Scully.

Scully was the Dodgers’ main broadcaster from 1950 when they played in Brooklyn all the way until his retirement in 2016 at the age of 88. His association with the Dodgers is the longest by a broadcaster in the history of sports – he called games for both Jackie Robinson and Corey Seager.

The Dodgers announced his passing late Tuesday evening on Twitter.

“We have lost an icon,” Dodgers president and CEO Stan Kasten said in a statement. “The Dodgers’ Vin Scully was one of the greatest voices in all of sports. He was a giant of a man, not only as a broadcaster, but as a humanitarian. He loved people. He loved life. He loved baseball and the Dodgers. And he loved his family. His voice will always be heard and etched in all of our minds forever. I know he was looking forward to joining the love of his life, Sandi. Our thoughts and prayers go out to his family during this very difficult time. Vin will truly be missed.”