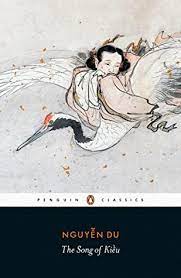 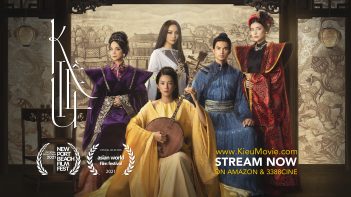 Los Angeles, CA (The Hollywood Times) 12/2/21 – I’m not usually a fan of period pieces – I remember being slightly irritated with movies like Robin Hood: Prince of Thieves or even Bruce Lee Hong Kong martial arts movies set in the past. I prefer movies set in the present-day with modern relatable scenes and scenarios.

But the breathtaking KIỀU proved to be quite an exception. Throughout the 90 minutes, I was appreciating the sheer excellence achieved in all aspects of the movie: the cinematography, costumes, perfectly paced story, and stellar acting, which conjured up emotions throughout.  Never a dull moment and a big reason why Kieu has won numerous awards.

Inspired by the most famous Vietnamese literary classic of all time, The Tale of Kiều by poet Nguyễn Du, this female character-driven film is a story of a filial daughter, Kieu (Trinh My Duyen), who agrees to wed a stranger to save her falsely imprisoned father and brother. Unbeknownst to her, this marriage is a deceitful façade to force her into sex labor at a brothel.  There, she deals with unsavory characters, but eventually, her talent and beauty bring her to a favored status, temporarily saving her from sex slavery. This spawns cruel jealousy from some, and unwanted obsession from others.

Pushed into an emotionally wicked and twisted journey, she is told that she has a certain fate, a cultural element strong in Vietnamese and Asian cultures. But her youthful spirit of rebellion leads her to defiantly challenge this rigidity. She picks infatuation and all the harsh realities that came along with that choice.

With lush cinematic work portraying achingly romantic landscapes of Vietnam, Kiều the movie is a profound juxtaposition of the suffocating conditions of women in a feudal regime and the beautiful but messy empowerment of human liberation.

The cinematography featured beautiful waterfalls, mountains, and the lush greenery of Vietnam. American audiences should see this as a welcome change of scenery from all the Southern California productions that dominate Hollywood. The beautiful costumes brought elegance, even in the toughest and grittiest of scenes. There was one powerful scene as the female lead, Kieu, is being painted and it seamlessly panned from the painting to a real-life scene of her, perfectly.

Kieu’s quiet strength was powerful and her subtle performance made her tribulations even more powerful. However, the supporting cast was just as impressive. The Madame at the brothel brought a comedic relief to the story. With a combination of humor and caustic toughness, we saw different dimensions. She was intelligent, obsessed with money, and knew Kieu’s value as a high ticket item, bending to societal norms at the time, using her beauty and elegance, and music talent to draw top-dollar clients. The human trafficking component, the oldest trade in the world, played out well without being overbearing or preachy. It became more a commentary on the poverty in ancient Vietnam and its facets including superstition and rigid social norms and hierarchies.

What I loved most about the movie was that the action started right away. So many movies take forever to build up the characters, creating a boring first act. Here, the action started right away and the plot moved along organically, a testament to strong editing and the empathy the director Mai Thu Huyền gave to each character, including the role of a cheated wife she plays acting duties on, as well as her cheating husband.

The fight scenes were a great addition, especially for the male viewers.  This not only included the male lead Thuc Sinh (Lê Anh Huy) fighting for his love, but also the spirit mother figure that appears as a conscience and alter ego for Kieu. This alter ego accuses Kieu of lust but ultimately gets pushback. Her concern is seen as resentment, and Kieu powerfully says “Resentment can eat you alive”, questioning the spirit’s meddling.

The dialogue was well written. It did not get sappy, but instead showed the complexities of love, lust, infidelity, and betrayal. I liked the female-centric focus which displayed empathy but also explored a man torn by his own frailty without vilifying or oversimplifying the character. Family dynamics also came into play as the betrayed wife says to her mother not to make the infidelity public as it would cause her and the family shame. The powerful hierarchy in Asian cultures of the elite and their staff and maids played powerfully into the emotional dynamics of the plot, using items and imagery such as the burning of a bracelet to drive the plot home.

Powerful emotions were accessed in one of the final scenes, as Kieu had to deal with the dichotomy of allegiance to those who saved her life, but were also mercilessly taunting her. The choice she makes at the end itself was a twist but also a powerful lesson in itself. This is a must-watch for any Asian period film enthusiast, but the story itself has the potential for serious crossover due to its high quality of production and a universal storyline that contains all the complexities of love in 2021. Two thumbs up.