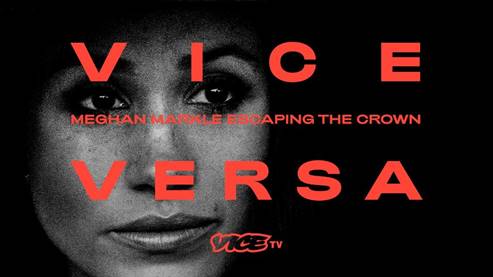 Institutionalized racism drove the U.K’s first black princess to flee the crown, according to a new documentary that confronts the Palace’s toxic culture and British attitudes towards race

Produced by the award-winning UK-based production company ITN, the hour-long special takes a deep dive into the rapid rise and unraveling of the Duchess of Sussex, investigating the role that the monarchy and British tabloid media have played in vilifying Britain’s first black princess. As the saga continues with Harry and Meghan’s loss of royal branding, the documentary confronts issues of race, prejudice, and obsession in a story that now threatens to upend one of the longest-running institutions in the world, featuring exclusive interviews with palace insiders and experts including William and Harry’s former butler, the American wives of the British aristocracy, and royal correspondents.

The documentary is VICE TV’s first release for VICE VERSA, a new series of independent documentary specials that will give voice to radical and unapologetic points of view. Immersive and provocative, the stories featured on VICE VERSA will tackle broken systems and corrupt power structures head on.

“Our flagship documentary series VICE VERSA will serve as a hub for compelling storytelling that shakes the status quo and awakens viewers to new ideas.  We take differing points of view of well known stories and topics.” said Morgan Hertzan, Executive Vice President and General Manager, VICE Television. “Meghan Markle Escaping The Crown is a prime example of a point of view you won’t hear elsewhere – we’re tackling this subject in a confrontational way to say what’s really happening.”

VICE VERSA: Meghan Markle Escaping The Crown will be available on VICE TV via all major satellite and cable providers; VICETV.com; and the VICE TV app via iOS, Android, Apple TV, and Chromecast.

VICE TV is the Emmy®-winning international television network from VICE Media Group. Since its inception in 2016, the channel has ushered new audiences to cable with its compelling and provocative programming. Boldly redefining news and current affairs, VICE TV produces hundreds of hours of original content for over 160 million homes worldwide. Built around a mission to courageously explore the things that make us uncomfortable, drive curiosity, and awaken our sense of wonder, VICE TV showcases the best in informative and entertaining original series, documentaries and movies.