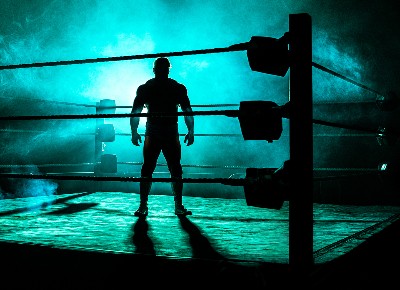 WATCH THE TRAILER | DARK SIDE OF THE RING S2

March 3, 2020 – Brooklyn, NY – Today, VICE TV announced that season two of the critically acclaimed series, DARK SIDE OF THE RING, which lifts the veil on wrestling’s most controversial stories, will premiere on Tuesday, March 24th at 9:00pm ET/PT on VICE TV with a two-hour special episode on the tragic story of wrestling icon Chris Benoit. The series, produced by VICE Studios, will air weekly on Tuesdays at 10:00pm ET/PT.

This season, DARK SIDE OF THE RING, the most watched show in VICE TV’s history, ventures even deeper into wrestling’s shrouded past, revealing the brutal and often tragic consequences of a life lived in the squared circle. Wrestling icon and former WWE superstar Chris Jericho narrates the series.

“The first season of Dark Side of the Ring was a massive hit. These powerful stories transcend wrestling fandom and resonate with both fans of the sport and newcomers who were captivated by this incredible storytelling,” said Morgan Hertzan, Executive Vice President and General Manager, VICE Television. “We rise to the challenge and do not shy away from the truth. I am proud and excited to continue telling these courageous stories in season two.”

“As lifelong fans, we have always been fascinated by the behind-the-scenes, human stories of the world of professional wrestling,” said Executive Producers Evan Husney and Jason Eisener. “For our second season we’re going even deeper into its secretive past. Many wrestlers and family members we interviewed have never spoken out before. Our series seeks to help bring closure to their stories.”

The two-part premiere special episode delves into the tragic story of wrestling superstar Chris Benoit. In 2007, Benoit, one of the biggest names in the sport, killed his wife, Nancy and seven year old son Daniel before hanging himself in a crime that shocked the world and sparked a conversation about mental health in sports that continues today. The documentary offers unprecedented access to Benoit’s inner circle of family and friends, who reveal their complicated feelings about the tragedy 13 years later including his son, David: “That definitely was not him. He’s still my hero,” Sandra Toffoloni, Nancy Benoit’s sister: “I think I do, someday want to forgive him… it’s not today.”

In subsequent episodes, season two dives into a new slate of wrestling stories that include: the murder of Dino Bravo; the controversial “Brawl for All” tournament that led to career-ending injuries; the feared career of New Jack; David Schultz’s violent run-in with a 20/20 reporter; the death of Nancy Argentino,  Jimmy Snuka’s girlfirend; the inside story of wrestling’s ultimate tag team partnership Hawk and Animal; Herb Abrams’ fanatical attempt to build a wrestling empire; and the devastating story of Owen Hart’s stunt that went tragically wrong.

A new weekly after-show hosted by comedian and wrestling fan Chris Gethard, will air immediately following each episode at 11:00pm ET/PT and will feature a panel of guests from the worlds of wrestling and entertainment who will dissect the episodes. Fans will get to see dynamic conversations with insiders and experts, exclusive unseen clips and behind-the-scenes moments.

The first season of DARK SIDE OF THE RING was the most watched show in VICE TV’s history. Reviews earned the first season a 100% fresh score on Rotten Tomatoes and critics called the series “thrilling” and “entertaining for everyone, and essential viewing for wrestling fans.” The series garnered attention from the biggest names in wrestling including Dwayne ‘The Rock” Johnson who endorsed the show calling it “captivating” and “gripping.”

DARK SIDE OF THE RING will be available on VICE TV via all major satellite and cable providers; VICETV.com; and the VICE TV app via iOS, Android, Apple TV and Chromecast.

VICE TV is the Emmy®-winning international television network from VICE Media Group. Since its inception in 2016, the channel has ushered new audiences to cable with its compelling and provocative programming. Boldly redefining news and current affairs, VICE TV produces hundreds of hours of original content for over 160 million homes worldwide. Built around a mission to courageously explore the things that make us uncomfortable, drive curiosity, and awaken our sense of wonder, VICE TV showcases the best in informative and entertaining original series, documentaries and movies.

VICE Media Group is the world