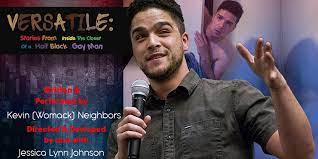 Los Angeles, CA (The Hollywood Times) 8/6/21 – Thursday, August 5, was a performance of a new one-man theatrical piece, Versatile, written and performed by Kevin Neighbors, a mixed-race young man whose work is subtitled “Stories from Inside the Closet of a Half-Black Gay Man.” Fast-paced, funny, and poignant, Versatile hits its mark of capturing what it is to grow up and live in the spaces between racial and sexual stereotypes. As an actor in this performance piece, Kevin Neighbors portrays over twenty characters with impressive agility. Directed and produced by Jessica Lynn Johnson, Versatile opened at the Broadwater Black Box Theatre on Santa Monica Boulevard in Hollywood as part of the 2021 Hollywood Fringe Festival. Versatile has been selected previously for the 2020 Black Voices Theatre Festival and the Los Angeles Women’s Theatre Festival/ The play will be performed again on Tuesday, August 17, at 5:00 pm and Sunday, August 29, at 11:00 am. Admission is $16.00 and online ticketing is available at http://hff21.com/7118. All performances are live=streamed for those who prefer an online option. 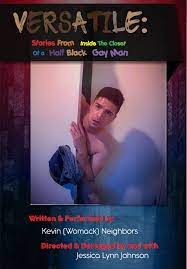 Kevin Neighbors wrote this high-energy play based on his own personal experience of growing up mixed-race and later realizing that he is gay. But the genius of this one-man play is the multiplicity of voices he not only incorporates into the story but his ability to perform all the parts himself on stage and assume the voices and characters of a large cast, modulating voices and characters in rapid-fire motion. Kevin’s story is his own, as a young boy who was bounced around the foster care system in the 1990s after he and his brother were taken from his biological mother by Child Protective Services. At that time, transracial child placement was frowned upon. We learned quickly that he and his brother were adopted into a white family –suburban, conservative, and religious. His adoptive mother was well-meaning but racially insensitive and often referred to Kevin as her “mulatto cookie” because his skin color is much lighter than his brother’s. Being mixed-Black, Kevin tries to exist between two worlds, because he is still perceived by many as Black and has to cope with the systematic racism that Black men today still experience. 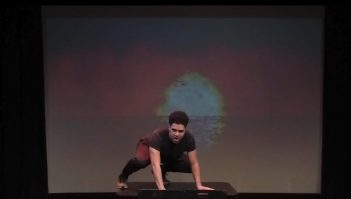 As a child, Kevin finds voices of his Black and African ancestry in characters from The Lion King who counsel him on how to stay strong, be proud, and deal with life. Of course, those voices – so brilliantly and viscerally enacted by Kevin Neighbors on stage – are a mixed blessing. Mufasa the lion king speaks of pride, Timon the talkative meerkat offers curious advice, and Banzai the hyena is the voice of the cynical realist. These are voices in the head of a child and actor Kevin Neighbors effortlessly moves in and out of their personas on stage. This is only the beginning of a series of episodes from Kevin’s life. As he grows up and those voices recede, he encounters the subtle racism of living in a family where both adoptive parents are white and it is difficult to explain his identity to others. Add to that, emerging sexuality as an adolescent and a realization that he is gay. His “coming out” is handled in a way that has the audience roaring with laughter. A well-meaning teacher tells him about sexual roles among gay men and, being clueless, he has to figure out what all that means. Being half-Black, he discovers that there are preconceived ideas about the supposed sexual prowess of Black men, and he is uncertain what that means for him. 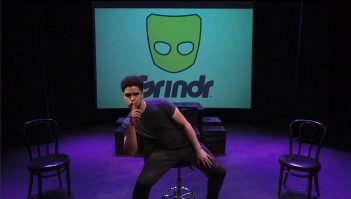 As a teenager, he has a troubling encounter with the police, when he is pulled over while driving the car of his white adoptive father. We get a clear sense of what Black young men have to endure in terms of police harassment on a regular basis in our society today. After high school, there is college and there Kevin encounters the academic approach to the issue of discrimination in a course entitled “Discrimination 101,” taught by a white lesbian who is clueless about how his mixed-race identity is more problematic than her simplified lecture notes. Kevin is gay and has a white boyfriend, who is also clueless about the subtleties of racial coding in language, music, and dress. All played out in a back-and-forth dialogue by one man on stage, the actor is able to capture conversations that really do typify the difficulty of fitting into standard expectations about a person who is half-Black and gay. He has to deal with stereotypes about Black men getting into finishing college but never finishing, as well as well-meaning professors who are unable to fathom the despondency he feels inside. 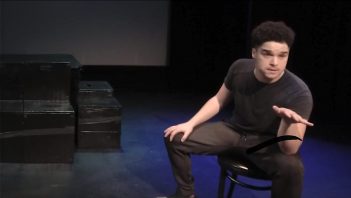 Somehow the voices of those animated creatures from the African wild are still part of his inner psyche and he begins to emerge as a stronger person, a college graduate in theatre arts, and smack up against the stereotypes for Black actors on stage. He is told that he does look Black enough to be cast in Black roles on stage. In a hilarious sequence where he is cast as Aaron the Moor in Shakespeare’s Titus Andronicus, the actor ferociously deconstructs the play where Saturninus, the son of the Roman emperor, wages war against the Goths and their queen Tamora. And then there is the matter of hip-hop, where Kevin reveals that there is more to being who he is and knowing that he can appreciate all kinds of music. But Kevin is a poet of sorts and he is able to deliver his own rap lyrics with speed and grace. Appropriately named, the one-man performance piece Versatile is what you need to see to fully appreciate.

The talented and personable Kevin Neighbors holds a BFA degree in theatre performance and digital media from the University of Idaho. Jessica Lynn Johnson, who developed and also directs Versatile, is the founder of the company Soaring Solo, with a number of directing credits to her name. My thanks to Jessica, the Broadwater Black Box Theatre, the Hollywood Fringe Festival, and publicist Philip Sokoloff for inviting me to see this great show.