Los Angeles, CA (The Hollywood Times) 10/16/21 – Leave it to Verdi to make a big splash in the return of L.A. Opera to the stage at the Dorothy Chandler Pavilion of the Music Center for six performances this 2021-2022 season. Led by the sure baton of conductor James Conlon, this production of Il Trovatore marked the return of L.A. Opera to the stage after a year’s hiatus. Conlon has conducted more than 500 performances of Verdi operas throughout his career. As the director of L.A. Opera explained: “Il Trovatore is a ghost story, a dark thriller that tells us how the specters of our need for revenge (Azucena), of our regrets (Manrico) or our unquenched desires (Count di Luna) imprison us and kill us.” This is an opera with five major roles and, of the principals, four were impressive, although they are not major stars in the world of opera. My viewing was via one of the two livestreamed performances on October 6.

Verdi’s opera premiered in Rome in 1853. The libretto was written by Salvadore Cammarano, based on the play El Trovador by Antonio García Gutiérrez. The opening night was September 18 of 2021 and the closing night October 10. Fortunately, two nights were livestreamed for audiences who chose not to attend in person. Il Trovatore is a fairly popular Verdi opera  but it has long been problematic for its racial stereotyping. It is the opera that has the anvil chorus that treats the “zingari” (traditionally translated as Gypsies but now better translated by L.A. Opera as “Romani”) as the awful other, with their witches who cast evil spells and burn babies. L.A. Opera director Negrín’s effort is to humanize Azucena, who avenges her Romani mother’s burning at the stake by stealing and incinerating the baby of a 15th century Spanish prince. In one of the libretto’s many incongruities, it turns out that Azucena mistakenly incinerated her own baby, so she has raised the Spanish one as her own. We witness Il Trovatore from Azucena’s point of view. Her charred child appears and reappears, as does charred momma. Centuries of terror and abuse toward the Romani appear to have created a community of grief, of which Azucena becomes for Negrín a symbol. The past cannot be escaped. 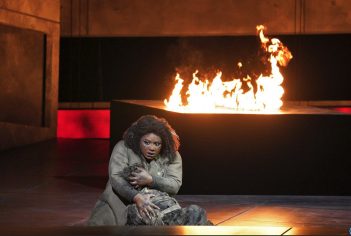 As might be expected the plot of Il Trovatore is extravagant and a bit far-fetched. It takes place in Spain, in the early 19th century, during the Peninsula War. The commander of the Royalist Aragon troops, Count di Luna (Baritone Vladimir Stoyanov), is obsessed with Leonora (Soprano Guanqun Yu), a young noblewoman in the queen’s service, who does not return his love. Outside the royal residence, his soldiers keep watch at night. They have heard an unknown troubadour serenading Leonora, and the jealous count is determined to capture and punish him. To keep his troops awake, the captain, Ferrando (Bass Morris Robinson), recounts the terrible story of a gypsy woman who was burned at the stake years ago for bewitching the count’s infant brother. The gypsy’s daughter Azucena (Mezzo-soprano Raehann Bryce-Davis) then took revenge by kidnapping the boy and throwing him into the flames where her mother had died. The charred skeleton of a baby was discovered there, and di Luna’s father died of grief soon after. The gypsy’s daughter disappeared without a trace, but di Luna has sworn to find her.

In the palace gardens, Leonora confides in her companion Ines (Soprano Tiffany Townsend) that she is in love with a mysterious man she met before the outbreak of the war, and that he is the troubadour who serenades her each night. After they have left, Count di Luna appears, looking for Leonora. When she hears the troubadour’s song in the darkness, Leonora rushes out to greet her beloved but mistakenly embraces di Luna. The troubadour reveals his true identity: He is Manrico (Limmie Pulliam), leader of the partisan rebel forces and believed to be Azucena’s son. Furious, the count challenges him to fight to the death. And that is only the beginning of a rivalry that has the Peninsula War as its backdrop.

Most striking is Guanqun Yu as Leonora, the love interest of both Manrico, the troubadour (Azucena’s “son”), and the Count (Manrico’s enemy and, we ultimately learn, his brother). Verdi made her a fiery heroine. Yu, on the other hand, is eloquent and understated and the most believable figure onstage. Her true, pure high notes become all the more meaningful for their lack of showiness. The sense of resolve and purpose she gives Leonora in sacrificing her life for love is inner strength rather than outer over-the-topness.

Raehann Bryce-Davis might have been two different Azucenas. Onstage, she was reduced to stock traumatized motions to gain our pity, but vocally she filled the emotional gap. She relied on her resonant mezzo-soprano voice to reveal complex depths of character.

Baritone Vladimir Stoyanov’s modest Count showed his strength primarily in his sword play. But the powerhouse bass Morris Robinson, as Ferrando, the captain of his guard, rendered the Count’s army formidable. Leonora had a sympathetic Tiffany Townsend as her suffering servant.

In Act 2, we encounter a band of gypsies in their mountain hideout. Azucena (Raehann Bryce-Davis) is the woman for whom di Luna has been searching. Her life is scarred by the memory of her mother’s death and the terrible revenge she exacted. Manrico, who has never heard the full story, is determined to finally know the truth. Azucena tells him how she stole the older count’s infant son but, in her manic rage, accidentally murdered her own child instead.

In Act 3, Manrico after being defeated in battle takes refuge with Leonora and they plan to marry. Count di Luna captures Azucena and plans to burn her on a funeral pyre. Then in Act 4, as might be expected in a tragic Verdi opera, things go from bad to worse. Count di Luna plans to order the execution of both Manrico and Azucena, but Leonora offers herself in return for her lover’s life. And it is Azucena who reveals that di Luna has killed his own brother.

As the director Francisco Negrin points out: “Il Trovatore is about the weight of the past. That past that haunts us, that past that destroys all possibility of living in the present, the future or love. Only Leonora (just like her namesake in Fidelio) understands that love and living in the present are the only paths to follow and she helps Manrico accompany her.  Azucena – haunted by her mother and her son, who were both burned alive – is the medium through which the past throws its fiery net and consumes everything.”

The staging of this production of Il Trovatore had some serious challenges. The Louis Désiré set so proudly built by L.A. Opera is a handsome, spare construction with moveable parts, including a tower that rises and lowers. Crevices serve a creepy crawly chorus. Fires come and go, as stark dramatic motives. The stage floor rises toward the rear, and everyone feels far away, adding to the dark, disturbingly ghoulish obscurity. The original set was built for the production in Monte Carlo but was stranded out in L.A. Harbor due to the backlog of ships. So the opera construction crew hastily built their own version of the original set. In many ways, this was emblematic of the stamina of L.A. Opera which is determined to move forward with a successful season.