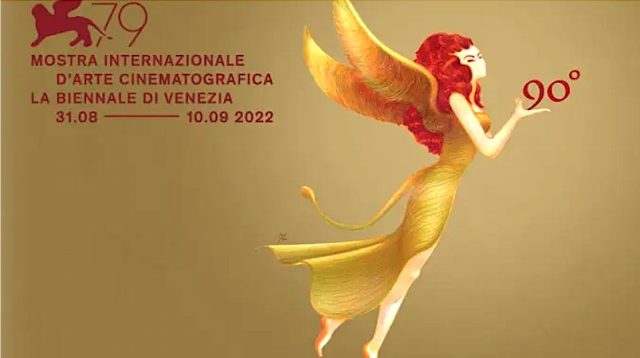 Los Angeles, CA (The Hollywood Times) 7/26/22 – August is the slowest time of year for new films in the theatres but the fall season starts off with the impressive lineup of new films that will premiere at the 79th Venice International Film Festival from August 31 to September 10. New works by Darren Aronofsky, Andrew Dominik, Alejandro J. Iñárritu, Luca Guadagnino, Joanna Hogg and Laura Poitras are among the rich roster of titles that will launch from the Lido and compete for a Golden Lion at the upcoming Venice Film Festival.

Darren Aronofsky, a Venice aficionado whose Black Swan was the Lido’s opener in 2010, is back with The Whale, an adaptation of Samuel D. Hunter’s play about a morbidly obese recluse, played by Brendan Fraser and also starring Sadie Sink and Samantha Morton. In this American psychological drama, a 600-pound middle-aged man named Charlie tries to reconnect with his 17-year-old daughter. The two grew apart after Charlie abandoned his family for his gay lover, who later died. Charlie then went on to binge eat out of pain and guilt.

Meanwhile, Dominik’s Marilyn Monroe drama Blonde, starring Ana de Armas as the Hollywood icon is one of four Netflix original films in the 23-title competition section. Blonde is a fictionalized chronicle of the inner life of Marilyn Monroe. Based on the bestselling novel by Joyce Carol Oates, Blonde boldly reimagines the life of one of Hollywood’s most enduring icons, Marilyn Monroe. From her volatile childhood as Norma Jeane, through her rise to stardom and romantic entanglements, Blonde blurs the lines of fact and fiction to explore the widening split between her public and private selves.

Also getting a Venice launch from the streaming giant – which is clearly gunning for more Oscars after Power of the Dog, which premiered on the Lido last year – is the fest’s previously announced opener, Noah Baumbach’s White Noise, with Greta Gerwig, Adam Driver and Jodie Turner-Smith, which is based on the 1985 postmodern novel of the same name by Don DeLillo. White Noise marks the first time a Netflix film has landed in Venice’s opening slot. Set at a bucolic mid-western college known only as The-College-on-the-Hill, White Noise follows a year in the life of Jack Gladney, a professor who has made his name by pioneering the field of Hitler studies (though he has not taken German lessons until this year). He has been married five times to four women and rears a brood of children and stepchildren (Heinrich, Denise, Steffie, Wilder) with his current wife, Babette. Jack and Babette are both extremely afraid of death; they frequently wonder which of them will be the first to die.

Other Netflix originals in the Venice competition are Iñárritu’s Bardo, False Chronicle of a Handful of Truths, which chronicles the story of a Mexican journalist and documentary filmmaker who returns home and works through an existential crisis as he grapples with his identity and family relationships. The film stars Daniel Giménez Cacho as the Mexican journalist, as he recounts the folly of his memories as well as the past of his country.

In Romain Gavras’ modern tragedy Athena, co-written by the French The World is Yours director with Les Miserables filmmaker Ladj Ly. In this tale, Hours after the tragic death of their youngest brother in unexplained circumstances, three siblings have their lives thrown into chaos. Romain Gavras is known for his work on music videos for popular musicians like Kanye West, Jay-Z, and M.I.A. Gavras has also worked on films like The World is Yours and Burke and Hare.

Luca Guadagnino, who first made a splash in Venice with Tilda Swinton-starrer I Am Love, is back on the Lido with Bones and All featuring Call Me By Your Name star Timothée Chalamet and Taylor Russell as cannibal lovers on a road trip across America in the 1980s. The film is said to be about “two outsiders who embark on a 1,000-mile odyssey through Ronald Reagan’s America. When they discover they cannot outrun their terrifying pasts, the pair take a final stand to determine whether their love can survive their otherness.” Bones is from Amazon-owned MGM.

Vying for a Golden Lion, as is The Eternal Daughter starring Tilda Swinton, which is directed by her old friend, the acclaimed filmmaker Joanna Hogg, who is known for The Souvenir. In this ghost story set in Wales, from acclaimed filmmaker Joanna Hogg, a middle-aged daughter and her elderly mother must confront long-buried secrets when they return to their former family home, a once-grand manor that has become a nearly vacant hotel brimming with mystery. 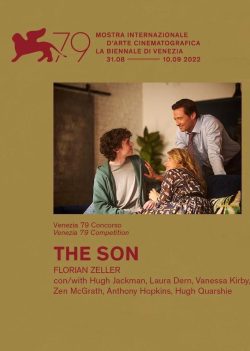 Florian Zeller’s The Son, from Sony, from the director’s Oscar-winning The Father and stars Vanessa Kirby, Laura Dern and Hugh Jackman. Peter (Hugh Jackson) has a busy life with his new partner Emma and their baby, but that is thrown into disarray when his ex-wife Kate turns up with their teenage son, Nicholas.

Searchlight has Martin McDonagh’s The Banshees Of Inisherin, the Irish director’s follow-up to Three Billboards Outside Ebbing, Missouri.  Banshees centers on the dynamics of lifelong friends on a remote Irish island and reunites McDonagh (In Bruges) with stars Brendan Gleeson and Colin Farrell.

Focus Features will be on the Lido with Todd Field’s Tár, which teams the In the Bedroom director with Cate Blanchett as the fictional Lydia Tár, one of the world’s greatest conductors and the first female conductor of a major German orchestra. Blanchett is a Venice regular who presided over the festival’s main jury in 2020.

Susanna Nicchiarelli is back in competition with her new film Chiara, featuring Margherita Mazzucco (from My Brilliant Friend) as the 13th century Saint Clare of Assisi which will conclude the director’s trilogy of female biopics also comprising “Nico, 1988” and “Miss Marx.”

Oscar winner Laura Poitras (Citizenfour) is in competition with her new under-the-radar documentary titled All the Beauty and the Bloodshed, about photographer Nan Goldin’s battle against the notorious big-pharma Sackler family. The lineup includes Italian director Andrea Pallaoro’s drama Monica in English and set in his Ohio. It stars transgender actor Trace Lysette (Transparent) as a woman who returns home to the Midwest to care for her dying mother, played by Patricia Clarkson.

The closing film at the Venice Film Festival will be Francesco Carrozzini’s The Hanging Sun, adapted from the novel by Jo Nesbo. Starring Peter Mullan, Jessica Brown Findlay and Charles Dance, The Hanging Sun tells the story of a man n the run from his former employer in a crime syndicate. This reluctant hitman seeks refuge in an isolated village where he is faced with events that test the true nature of his conscience.