Los Angeles, CA (The Hollywood Times) 3/18/22 – Opening the Locarno in Los Angeles Film Festival on Thursday, March 17 at the 2020 Arts & Archive Center on Beverly Boulevard in Los Angeles was an award-winning Indonesian film Vengeance Is Mine, All Others Pay Cash (2021), by the director who goes by the name of Edwin, from the vanguard of the Indonesian New Wave. Vengeance Is Mine, All Others Pay Cash is an Indonesian black comedy action drama film based on the best-selling book of the same name by Eka Kurniawan. The film had its world premiere in August 2021 at the 74th Locarno Film Festival, where it won the top prize of Golden Leopard for Best Film. Set in the 1980s in a society ruled by machismo, a hibernating “bird” becomes a serious matter. In a life of brutality, the sleeping bird is an allegory for a peaceful and serene life, even when the whole world tries desperately to rouse it.

Vengeance Is Mine, All Others Pay Cash, set in 1989, is a fight-filled oddity that sticks to its retro guns, at the same time updating some tropes to fit in with more “woke” times. At least that’s according to its director, Indonesia’s own director Edwin, who explains: “Why do we waste time obsessing over impotence, while violence still keeps occurring all around us? We need to chill on the macho culture.” Male impotence is very much on the mind of Ajo Kawir (played by Marthino Lio). He’s a local troublemaker with a murky past who is always ready to smash someone’s face in, usually for no reason at all because, apparently, “only a man who can’t get it up can face death without fear.” 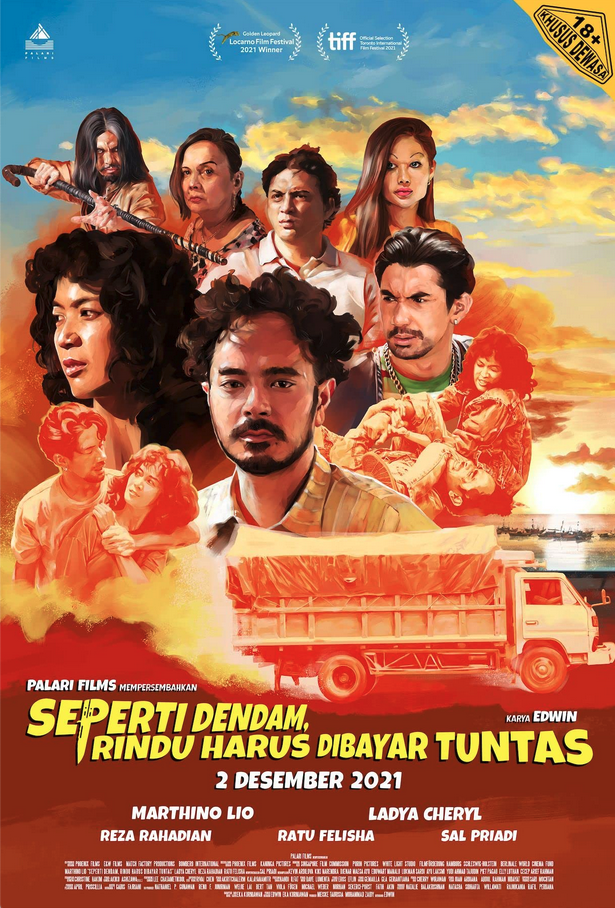 Given Edwin’s anti-macho ambitions, it’s almost ironic how often Ajo’s predicament is actually discussed, and frankly, there are only so many mentions of dicks getting hard, or not, that one can take in a single sitting. Luckily, soon he meets a lady named Iteung (Ladya Cheryl with a perm, probably the film’s biggest highlight) who doesn’t seem to care about it that much and they decide to marry, but the happiness can only last so long. Despite his “hibernating bird,” blood still flows through Ajo’s heart and it begins to beat for the bodyguard of his latest target, the beautiful and badass Iteung (Ladya Cheryl). After a riotous rumble, the two brawlers fall hopelessly in love, but their happiness is threatened by their respective libidinal needs and anxieties; not to mention Ajo’s ill-advised procrastination in assassinating a notorious gangster, as well as the jealous intervention of an unscrupulous Iteung admirer Bido Baik (Reza Rahadian Matulessy).

This central romance blossoming here is quirky and fun to watch, mostly because Cheryl’s Iteung is a fighter as well, and a very good one at that. Ajo sets off to settle a small-time score and runs into Iteung as a bodyguard. He doesn’t realize how tough Iteung really is until she throws him around with her Bruce Lee moves. Needless to say, there is something very satisfying about hearing a guy, any guy, say that he doesn’t “deal with women,” only to have his ass kicked, and then do his best to reciprocate, as in Edwin’s twisted world, a sudden flourish of love that happens when you beat a potential love interest to a pulp. Later, he gives her a freshly severed ear, too, of her former employer.

The film runs close to the original novel by Booker Prize-nominated Eka Kurnawan, who shared screenwriting duties with Edwin. At times, the film is very funny, sometimes dark. Edwin the director seems determined to deliver a more complex approach to trauma, especially of a sexual nature – a bit of a surprise, given that his film starts off like Fast & Furious: The Moped Edition. Stuck between a parody and a new, deeper take on the kind of stories that Tarantino usually makes. A meandering subplot with a ghost story features actress Ratu Felisha as Jelita, a woman who hitches a ride with Ajo when he takes up driving a truck along the North Coast.

As a novel, Vengeance is relatively unusual due to its subject matter and narrative style. Asked why he chose to adapt this story, Edwin replied “I first read the novel back in around early 2016 and I felt the rush immediately. I thought, ‘Wow, this would be very interesting as a film!’, though I had never adapted a book before. So I pitched the novel to the producing partners at Palari Films and it so happened that they were looking for potential material to adapt. For me, deciding to adapt this novel posed a challenge because the film adaptation subsequently pays tribute to Hong Kong-made and Indonesia-made action and horror films of the ’80s and the ’90s. I could sense how the novel was heavily influenced by that particular slice of pop culture. However, the novel retains no faculty of nostalgia whatsoever. Just the opposite: it feels relevant and I found that very riveting.”

Both the novel and the film discuss the toxicity of machismo culture. Edwin elaborates: “Machismo culture in which men must be judged based on qualities that define masculinity, and this culture was very dominant during the New Order regime [in Indonesia] back in the ’80s. It transpired a long time ago, but I feel like the byproduct of that machismo culture is unmissable to this day. Physical violence is still normalized, even though this present era should be an improvement to the past 20 years. That backdrop is what assured me that this film must have the capability to speak volumes to its audience. Impotence could also be interpreted as a metaphor for how the patriarchal values of our society still manage to squash the fragile things.”

Edwin is an accomplished film director, known for his Blind Pig Who Wants to Fly (2008), Postcards From The Zoo (2012), Possessive (2017), Aruna & Her Palate (2018). Vengeance Is Mine, All Others Pay has been picked up for distribution by The Match Factory and will have a theatrical run soon. The Locarno in Los Angeles Film Festival at the 2020 Arts & Archive Center is screening 12 films from the Locarno Festival 2021 and presented by Acropolis Cinema in conjunction with MUBI.