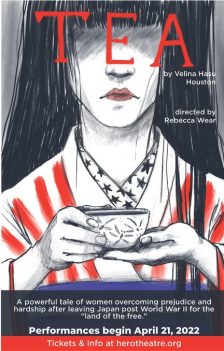 Los Angeles, CA (The Hollywood Times) 4/25/22 – This weekend of April 23 & 24 was the opening production by the Hero Theatre at the Inner-City Arts Center in Downtown Los Angeles of a fine play Tea, written by Velina Hasu Houston – A powerful tale of women, immigration and survival. The play was written in 1981, had a Rockefeller Workshop Production in 1984, and premiered Off-Broadway at Manhattan Theatre Club in 1987. Tea is a story about five Japanese war brides who married American G.I. ‘s whom they met in Japan soon after the end of World War II.  Tea preceded The Joy Luck Club by several years and also inspired it.  A musical version opened in 2012 at East West Players in Los Angeles, but the music proved to be highly distracting. In this new production directed by Rebecca Wear, the production is basic play (without the unneeded musical additions) and done in the ideal stage space of the Rosenthal Theatre at the Inner-City Arts Center and featuring the scenic design by Carlo Maghirang.

The story takes place in the rural town of Junction City, Kansas, in 1968 – an unimportant town near a U.S. Army Base. Following the death of one of their own, four women come together to clean the house of the fifth as they reflect upon how her tragic suicide has upset the balance of life in their small Japanese immigrant community in the middle of the Kansas heartland. The spirit of the dead woman returns as a ghostly ringmaster to force the women to come to terms with the disquieting tension of their lives and find common ground so that she can escape from the limbo between life and death, and move on to the next world in peace – and indeed carve a pathway for their future passage.

Forty years after the play was first written, the themes of Tea have gained a newfound relevance in the recent upsurge of violence against Asians and Asian Americans – especially women – as their belongingness and even personhood are once more called into question. This production, directed by professional guest director Rebecca Wear with an ensemble cast led by  Himiko (Tomoko Karina), aims to explore the oft-unknown stories of the Japanese war brides from nearly seven decades ago through the lens of contemporary society, in the hopes of both honoring the legacy of our collective history as well as closely examining its resonances in our modern-day world.

After World War II, more than 100,000 Japanese women married American GIs and resettled across the United States. We meet five of those brides, unmoored in the Midwest, in Tea. The occasion is a tea ceremony — and an exorcism. In a small Kansas town, Himiko (Tomoko Karina) has killed herself after a downward spiral of loss and rage. As her spirit wanders in torment, her friends gather to reflect on their lives, far from tradition and home.

Married to men of color, Teruko (Olivia Cordell) and Setsuko (Hiroko Imai) endure a double dose of prejudice. Tough-minded Chizuye (Elaine Ackles) clashes with prim Atsuko (Hua Lee), who prides herself on having a Japanese-American spouse. Himiko watches these unhappy women with alarm: If the living cannot find peace, her lonely ghost will wander limbo forever.

What is impressive about the acting in this production is the way the five women move into different roles from their own lives and experiences. They don’t limit themselves to having tea in the disorderly house left by Himiko after her death. They eventually don kimonos and recount their experience in Japan after the war ended and how as very young women, they fell in love with American G.I.s stationed in Japan, married and left for America – without realizing that they were in for in a rural town in Kansas. Later in the play, they suddenly put away the tea cups and take out bottles of beer, as they adopt the personae of their American husbands, with their typical swagger and man-talk. 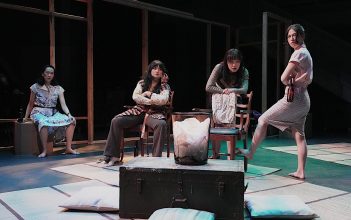 To top that off, they eventually veer in minimal apparel as they morph into their own teenage daughters, who are so Americanized as they have little patience with the behavioral expectations of their traditional Japanese mothers. As the play moves from the past to the future, it returns to the meaning of the present and the reasons why the four remaining Japanese women have gathered to honor the spirit of the recently-deceased Himiko: They acknowledge their isolation in American culture in the heartland of Kansas, where Japanese customs seem so different from standard American ones.

As director Rebecca Wear explained in an interview, Tea provides the audience with an opportunity to hear “multiple Japanese women, each with a different set of experiences, each with different sensibilities, grappling in some ways the same historical events.” Wear is currently the resident director of the Hero Theatre at the Inner-City Cultural Center and she chose to tackle this play Tea, because of its subject matter related to xenophobia and the challenges of being an Asian immigrant even more ever in recent times. “Much as the play deals with trauma, it is incredibly playful and offers a lot of opportunity for connection and comedy that even though it’s thirty years old, it still feels like a thousand times true to my experience as a daughter of immigrants. It continues to be relevant today.”

Tea which was originally produced in New York City in the 1980s by veteran stage and film actress Olympia Dukakis (who died in 2021), who helped to found the Hero Theatre Group at the Rosenthal Theatre and funded the on-going director mentorship program there. The Founding Artistic Director of Hero Theatre for the Inner-City Arts Center theater education programs is Elisa Bocanegra, a Puerto Rican actress and artist who founded the Hero Theatre ten years ago. In speaking with Elisa, she explained that so many talented Japanese-American actresses auditioned for the roles in the play Tea that she decided to have two separate casts and plan to use them in alternating weeks.

Elisa explained: “By a beautiful twist of fate, ten years ago, I played Olympia Dukakis’ funny maid in a show at the Roundabout Theatre in New York City. We shared a dressing room. She told me that my talent was bigger than the opportunity that would be given to me because I was Puerto Rican. She was right. I had faced a lot of discrimination in the industry. Not only for being Latinx, but also because I’m not a size 2. Olympia made me start Hero Theatre. To help others like me. I’ll never forget her advice and generosity. She changed my life. Having Hero gave me a sense of purpose and a place to channel a lot of my pain into art that can help others.”

Rebecca Wear’s directing has been seen at Actor’s Express, Know Theatre of Cincinnati, HERE Arts Center, Greenway Court, UC Santa Barbara, Women’s Center Stage, and other theatres and various sites/ She has associate-directed at Oregon Shakespeare Festival and Arena Stage. She was an Artistic Associate at The Orchard Project, held fellowships and internships at Center Theatre Group, The Public’s Literary department, and Clubbed Thumb.

The Hero Theatre Company is resident at the Rosenthal Theatre in the Inner-City Arts Center complex, located at 720 Kohler Street (off Sixth Street. Performances of Tea take place Thursdays, Fridays and Saturdays at 8 p.m. and Sundays at 2 p.m. and 7 p.m. from Saturday, April 23 through Sunday, May 15 (no evening performance on Sunday, April 24). Tickets are $30. To purchase tickets, go to: https://teaherotheatre.brownpapertickets.com/