Los Angeles, CA (The Hollywood Times) 4/4/22 – On April 2 and 3 at the Los Feliz Theatre in Los Angeles, the American Cinematheque had two screenings of Valentyn Vasyanovych’s award-winning drama Atlantis (Ukraine, 2019). The film was Ukraine’s Oscar submission for 2021 due to the challenges with release due to COVID previously, although Atlantis won the Venice Horizons Award at the 2019 Venice Film Festival, the story is set in Eastern Ukraine in the Donbass region in the year 2025 when much of Ukraine has become a desert unsuitable for human habitation and a wall is being built on the border.

Sergiy, a former soldier, is having trouble adapting to his new reality, as he suffers from PTSD from the recent war against Russia. While on a volunteer mission to exhume the recent past, he meets Katya. Together, they try to return to some sort of normal life in which they are also allowed to fall in love again.

All of the roles were played by veterans, volunteers, and soldiers. Andriy Rymaryk, who plays Sergiy, was a military scout during the war in Donbas, and Liudmyla Bileka, who plays Katya, was a paramedic. The film was shot in Mariupol, which has been heavily shelled since the start of the current Russian invasion, and is largely destroyed with civilians either in hiding or seeking to escape the country. The dialogue is in Ukrainian, with English subtitles.

In the signature style of Slavic arthouse cinema, it mostly comprises a series of long-held, static widescreen tableaux. Each scene is about the same length, and within each long, ventilator-speed shot everything seems to carry the same weight: a man being berated by a supervisor at a steel mill and then jumping into the smelter in despair; another guy making a bathtub out of a rusted-out digger bucket; a couple having sex in real time. The story is set in 2025, “a year after the end of the war” – in other words the one with Russia in eastern Ukraine that’s been rumbling away for years now. But instead of being numbingly dreary and depressing, given the economically depressed, horrifically polluted and landmine-strewn region, Atlantis is strangely upbeat, oddly hopeful even.

With the steel mill officially closing, Sergiy (Andriy Rymaryk) is at loose ends but eventually gets a job driving a truck containing fresh water to areas where such a thing is no longer available. On one trip, he is diverted away by a crew uncovering and defusing land mines near the main road and is flagged down by Katya (Liudmyla Bileka), whose truck has broken down on a remote stretch. It turns out that she and another volunteer have made it their mission to find and retrieve the anonymously buried bodies of the war dead in the hopes of identifying them and giving them proper burials. This is ghastly business, to be sure, but when Sergiy volunteers to help Katya in her duties when he isn’t making water runs, it marks his first tentative steps towards regaining the humanity he had assumed was lost forever.

Atlantis is not a plot-driven film by any means. Instead, writer/director Valentyn Vasyanovych is more interested in putting viewers into Sergiy’s numbed headspace. He accomplishes this largely through a deliberately detached approach, capturing everything from the bombed-out landscapes to decaying corpses through a series of scenes shot in single extended takes that, save for a couple of exceptions, in which the action unfolds before an unmoving camera. The effect is disconcerting at first but it proves to be the right approach for material that might have been completely unpalatable if presented in a more conventional manner. The cinematography may remind some viewers of filmmakers as varied as Werner Herzog, Chantal Akerman, and Jim Jarmusch, but Vasyanovych has his own distinct vision.

While the movie deals with exceptionally grim material, it never becomes too unbearable to watch. You would think that a movie containing a long and unbroken shot of a couple of doctors methodically stripping and examining a recently excavated corpse would be too much, but Vasyanovych handles this and other similar scenes in a delicate manner; he doesn’t shy away from the horrors, and he also refuses to wallow in them. 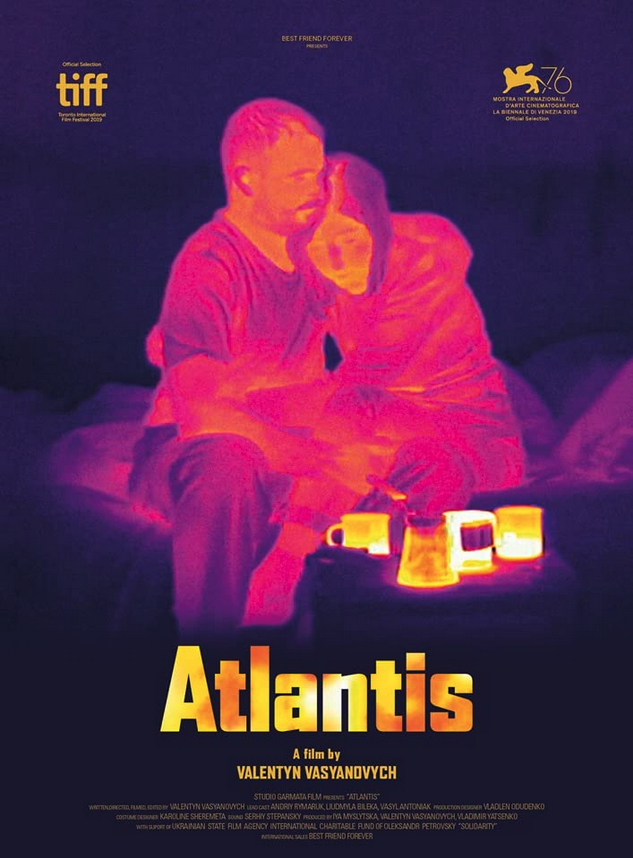 At the same time, there are surprisingly enough moments of quiet and unexpected wit, such as a 1984-inspired scene in which the steel mill owners announce its closing to the workers, and a wonderfully developed sight gag in which Sergiy transforms a digger bucket into an enormous hot tub in order to have a brief moment of relaxation amidst his ruined surroundings. There’s even a climactic moment of intimacy that’s all the more startling because of its surroundings. It could have seemed to have two stranded people making love in a stalled truck used for transporting corpses. But Vasyanovych finds just the right touch to let its humanity come through in a manner that is both touching and convincing.

This is a dark film but, given the atrocities in the current war in Ukraine, it seems eerily prophetic of what is unfolding and how we will see the deserted and ravaged Ukraine in the foreseeable future.