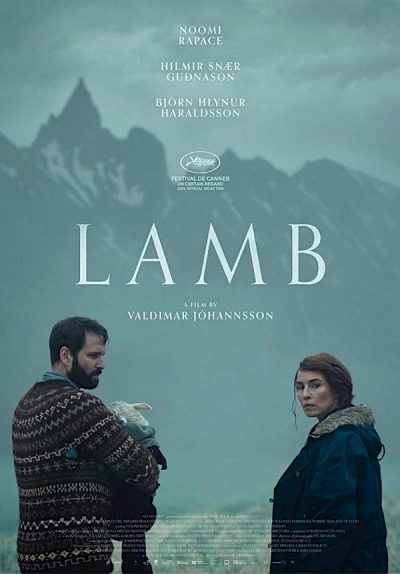 Screening currently at the CineLounge Sunset in Hollywood is Valdimar Johannsson’s film Lamb (Dýrið, Iceland, 2021), which received the Cannes Film Festival Award for Originality on the part of an International Debut Filmmaker. The less you know about the new Icelandic film Lamb (Dýrið) going in, the better. Noomi Rapace and Hilmir Snær Gudnason play an Icelandic sheep-farming couple in rugged rural Iceland. At the beginning of the film, Maria and Ingvar go about their daily domestic routines and farm chores with minimal communication and zero joy, hinting at a hole in their lives, the cause of which will be revealed only much later. Clearly, they have suffered a pain so tremendous they are unable to speak of it. They are childless but somehow during lambing season in the spring they receive what they interpret to be an unexpected gift from nature to soothe their pains.

Early on, we heard folkloric stories read by Maria and Hilmir and these seem to play out in this wild and weird folkloric drama, laced with brooding genre elements that veer into horror. Some aspects of Lamb will remind viewers of Robert Eggers’ The Witch, with its steadily building dread conjured out of long silences, an eerie loneliness and a bold grasp of the dark mysteries of human-animal relations. The bracingly original film was written by Johannsson with the Icelandic poet, novelist, lyricist and screenwriter who goes by the mononym Sjón, who also co-wrote Eggers’ upcoming Viking revenge thriller, The Northman. Johannsson was a student at Béla Tarr’s Film Factory in Sarajevo, and there are the faintest echoes here of the narrative austerity and the embrace of stillness in the work of Béla Tarr, who serves as an executive producer.

Trying hard to avoid spoilers, it must be said that the couples’ dog is the bellwether of this fascinating tale, alerting them to something happening in the sheep shed. A female newborn, but what exactly is she? That remains something of a mystery even after Maria and Ingvar begin raising her in the house, bottle-feeding her and tucking her under blankets in a crib. Whatever she is, she represents their salvation.

The couple’s longing for the parenting experience makes them respond to the strange opportunity they’ve been given like people transformed. Gudnason injects Ingvar with new warmth and volubility, while Rapace – who is Swedish but spent her childhood in Iceland and gives what’s easily one of her best performances – reshapes Maria’s brittle remove into fiercely protective strength. When a stubborn ewe positions herself under the bedroom window of their humble little farmhouse to bleat in protest, Maria deals with the poor creature swiftly and mercilessly.

The unexpected arrival in Chapter II of Ingvar’s brother Pétur (Björn Hlynur Haraldsson), a failed pop star with a tendency to get into trouble and turn up at the farm battered and broke, threatens to upset the family’s fragile balance. “What the fuck is this?” he asks bluntly of the new addition. “Happiness,” responds Ingvar. Pétur seems to go along with Maria and Hilmar until in a celebratory mood, the men drink too much and Pétur continues to hit on his sister-in-law, perhaps suggesting a history between them. But his troublesome advances are nothing compared to the payback that nature – or some arcane folkloric version of it – has in store for them in Chapter III. You need to see Lamb for yourself to discover what Nature has in store for this Icelandic couple! A special thanks to CineLounge and publicist Philip Sokoloff in arranging for me to see Lamb before it opens in other theatres in Los Angeles.