Los Angeles, CA (The Hollywood Times) 10/28/21 – COLCOA French Film Festival in L.A.: November 1 – 7 is the 2021 edition of the City of Lights – City of Angels French Film Festival in West Hollywood at the Directors Guild of America. Here are presented the best new films and television series from France. An annual event, the date moved from May to early November of 2021. Some of the programs are free and the remainder ticketed. For more information about specific films, tickets, and the full festival program, go to: https://colcoa.org/day-by-day-schedule/  and https://colcoa.org/buy-tickets/  Passes and bundles are available at a discounted rate. Proof of COVID vaccination is required for entry to all events at COLCOA.

The Opening Night film at COLCOA is Between Two Worlds (Ouistreham), directed by Emmanuel Carrère and starring Juliette Binoche and Hélène Lambert. Marianne Winckler (played by Juliette Binoche), a well-known author, goes to live in northern France to research for her new book on the subject of job insecurity. Without revealing her true identity, she gets hired as a cleaner, working with a group of other women. In this new role, she experiences financial instability and social invisibility first-hand. But she also discovers mutual assistance and solidarity, strong bonds shared by these behind-the-scenes working women. The film will screen on Opening Night at COLCOA (by invitation only) and again on Saturday, Nov. 6, 1:45 pm.

The Closing Night Film of COLCOA will be Arthur Harari’s Onoda, 10,000 Night in the Jungle, which recounts the amazing-but-true story of Hiroo Onoda, a Japanese soldier trained in “secret warfare,” who spent almost 30 years hiding out in a Philippine jungle, oblivious to the fact that World War II had ended. Stubbornly faithful to his mission, Onoda leads his dwindling platoon into a kind of delusional guerilla-war odyssey, refusing to accept defeat and determined to fight to the finish. Arthur Harari’s second feature is ambitious and powerful in equal measure, long yet action-packed, suspenseful, endowed with truly epic performances, and in the end, an extraordinarily moving, almost anti-war tale. The film is in Japanese, with English subtitles and runs 165 min. Screens: Sunday, Nov. 7, 4:35 pm

Samir Guesmi, a well-known French actor, has directed Ibrahim, a portrait of the unconditional love between a father and his son. Newcomer, Abdel Bendaher, is a revelation in the role of Ibrahim, a taciturn technical school student torn between his devotion to his conscientious working-stiff father and his flashier, less-than-virtuous best friend. After undeservedly taking the fall for a robbery gone wrong, he’s determined to make up for that insult to his father, whose quiet dignity is beautifully brought to life by Guesmi himself. But given the difficulty both men have in expressing their feelings for one another, that’s easier said than done.  Screens Tuesday, Nov. 2, 5:45 pm 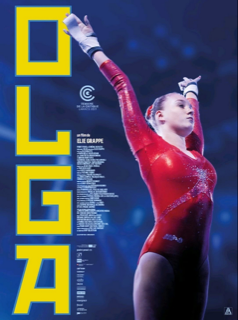 Elie Grappe’s film Olga, has its North American premiere at COLCOA. It is Switzerland’s 2022 Oscar submission for Best International Film – in French, Russian, and Ukrainian with English subtitles. Olga is the story of a driven 15-year-old gymnast training for the Olympics in Kiev in 2013. Her mother is an outspoken journalist with their dictatorial President Yanukovych in her crosshairs. As a result, both of their lives are in danger. So, Olga (played by Anastasia Budiashkina) is sent off to the safe haven of Switzerland, with the hope of joining the Swiss Olympic team. Almost documentary-like in its realism, Elie Grappe’s riveting portrait of a determined young athlete, set against the backdrop of a revolution unfolding in Ukraine, is as much a balletic ode to the passion and discipline of athletes everywhere, as an exploration of the profound, unyielding power of national identity. Screening: Tuesday, Nov. 2, 8:00 pm; it will be followed by a discussion with writer/director Elie Grappe.

Another film worth seeing is Restless, by Belgian director Joachim Lafosse. Damien Bonnard (Les Miserables – COLCOA 2019) and Leïla Bekhti give tour-de-force performances in this tense, tender, often-heartbreaking portrait of a family torn apart by mental illness. Damien is an impassioned painter who happens to be bipolar. Leila spends her days worrying about him and trying to keep their little boy safe. Yet the film’s intimacy and incandescent moments of joy and love — and an up-close-and-personal camera style — provide warmth and specificity, rendering three extraordinarily complex characters in vivid, merciless detail.  The fact that the director’s own father suffered from bi-polar disorder partially explains the extraordinary level of truth in this beautiful, moving, very powerful film. Screens: Tuesday, Nov. 2, 7:45 pm

In Carine Tardieu’s The Young Lovers (Les jeunes amants), two lovers meet 15 years after the first encounter, in the corridor of a hospital. She’s 71, he’s 45. Opposed but mesmerized by each other, they reconnect. Widow, mother, grand-mother, Shauna wants to reaffirm she’s a woman after all. Co-writer/director Carine Tardieu turns the typical May-December romance on its head with this discreet love story about a soulful 45-year-old oncologist who falls deeply in love with a beautiful, very independent 70-year-old retired architect. Melvil Poupaud’s and Fanny Ardent’s nuanced performances bring a fullness and depth to those characters, bypassing the usual clichés; expressing the thrill, anguish and vulnerability of falling in love — at any age — and revealing how true love is not at all blind, but flies in the face of the confines and preconceptions that society often likes to saddle it with. Screens Wednesday, Nov. 3, 8:00 pm

Veteran French actress Nicole Garcia has directed Amants (Lovers), which premiered at the Venice Film Festival 2020. Nicole Garcia delivers a good old-fashioned film noir, complete with doomed lovers, murder, lust, deceit, a deadly romantic triangle, and even a wink at Stanley Kubrick’s The Killing. The lushly elegant film moves from Paris to the isle of Mauritius to Geneva, and is deftly brought to life by a superb trio of actors — a guilt-ridden Pierre Niney, femme fatale Stacy Martin, and a particularly sinister Benoît Magimel. Garcia grew up in Algeria and became an actress in French television; she has directed 9 feature films. Screens: Thursday, Nov. 4, 5:00 pm.

Bruno Dumont, an iconoclastic filmmaker, delivers another genre-defying film in France, which stars Léa Seydoux as the title character, France de Meurs, the most famous TV news anchor in the country, whose life is upended when she runs her car into a guy on a motor scooter — a turn of events that suddenly calls everything in her untouchable, megastar universe into question. Having premiered at Cannes, Dumont’s film is a glossy satire on celebrity, the media, and apparently the very country of France itself. Screens Thursday, Nov. 4, 9:45 pm

One much anticipated film is Magnetic Beats (Les Magnetiques), directed by Vincent Maël Cardona. First-time director Vincent Maël Cardona bursts onto the scene with an exhilarating, post-punk coming-of-age story about two brothers who launch a pirate radio station in their Brittany backwater in the early 1980s. Swaggering Jérôme and his taciturn, more-geeky kid brother are a kind of Cain and Abel in this 21st century East of Eden about the circuitous journey of one diffident, creative, incisive young man on the way to finding his own voice. One might say the same thing about the film’s extremely promising new director. But the film’s pulsing heartbeat is also attributable to its highly-inventive soundscape and its gifted young leads — an introspective Thimotée Robart, smoldering Marie Colomb, and a charismatic Joseph Olivennes (who just happens to be the son of Kristin Scott-Thomas).  Screens Saturday, Nov. 6, 5:00 pm