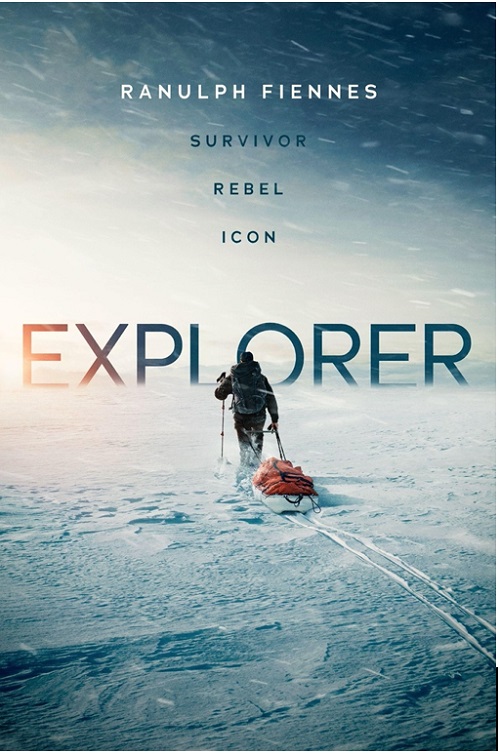 AVAILABLE ON DIGITAL AND ON DEMAND AUGUST 30TH

DIRECTED BY MATT DYAS (Jimmy and the Whale Whisperer, Forces of Nature with Brian Cox)

EXPLORER, a portrait of Sir Ranulph Fiennes, is a documentary that peels back the layers of Sir Ranulph’s life to go beyond his record-breaking achievements and reveal the man behind the myth. The documentary feature will be available on digital and on demand on August 30th, 2022.

Sir Ranulph Fiennes is credited with the sensational title of being the World’s Greatest Living Explorer. Amongst his extraordinary achievements, he was the first to circumnavigate the world from pole to pole, crossed the Antarctic on foot, broke countless world records and discovered a lost city in Arabia. He has traveled to the most dangerous places on Earth, lost half his fingers to frostbite, raised millions of pounds for charity and was nearly cast as James Bond (and yes, he does happen to be a cousin to Ralph and Joseph).  But who is the man who prefers to be known as just ‘Ran’?

The film also features appearances from HRH Charles, Prince of Wales, and fellow explorer Bear Grylls and others.

With exclusive access to Ran, his incredible film archive, preserved and cared for by the BFI National Archive, covering decades of expeditions and contributions from life-long friends and colleagues, EXPLORER tells the definitive story of an inspirational leader, delving deep into Ran’s audacious and eccentric dreams to explore the complex motivations behind them.

Director Matt Dyas says, “In EXPLORER, I wanted to create a compelling portrait of the real man behind the myth, and between the cracks of the ordinary and the extraordinary, I hope audiences see for themselves an intimate side to his personality and the motivations that drive him.”

EXPLORER is a Good Productions film in association with British Film Institute (BFI) and Universal Pictures Content Group. Directed by Matt Dyas and produced by BAFTA and Emmy-nominated George Chignell (Citizen K, Searching for Sugar Man, I Am Ali).

EXPLORER WILL BE AVAILABLE ON DIGITAL AND ON DEMAND AUGUST 30TH

Good Productions, established by award winning director Matt Dyas, specializes in making documentary films that challenge our understanding and assumptions about the world around us. We prioritize trust, respect and openness from the beginning to the end of the filmmaking process and believe in developing strong and lasting relationships with our contributors to tell personal stories with sensitivity and insight. We have a track record in working with leading international talent from across the industry. Awards for our work include BAFTA, Emmy, Jackson Hole, Telluride and Wildscreen.

We are a cultural charity, a National Lottery distributor, and the UK’s lead organization for film and the moving image. Our mission is:

Founded in 1933, the BFI is a registered charity governed by Royal Charter. The BFI Board of Governors is chaired by Tim Richards.

About the BFI National Archive

The BFI National Archive was founded in 1935 and has grown to become the one of the largest and most important collections of film and television in the world with over 180,000 films and 750,000 television programs. For over 80 years the BFI has been an international leader in film preservation and guardian of Britain’s unparalleled film and TV heritage. The BFI is an innovator in presenting films to audiences in new and dynamic ways, from cinemas to film festivals, outdoor events to online video-on-demand. At the heart of all its activities is the BFI’s central aim to ensure that everyone in the UK has access to the widest possible range of film and their own film heritage.

That heritage includes all-time great British directors Alfred Hitchcock, David Lean and Powell and Pressburger; and the rich vein of documentary filmmaking, in which Britain led the world, including the lyrical work of Humphrey Jennings. The archive also boasts a significant collection of filmmakers’ papers as well as extensive stills, posters and production and costume designs along with original scripts, press books and related ephemera.

Expert teams undertake the time-consuming and complex task of restoring films at the BFI John Paul Getty Jr Conservation Centre in Hertfordshire. The BFI’s most precious film materials are kept in optimum conditions in the world-leading Master Film Store in Warwickshire.